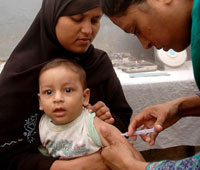 The disease is one of the leading killers of under-five children in the country, accounting for about 19 percent of child mortality. Last month Pakistan became the first country in South Asia to introduce a free pneumonia vaccine, to immunise five million children against the deadly disease annually.

GAVI plans to contribute 680 million dollars, and the government has donated 17 million rupees (175,000 dollars) to provide the vaccine until 2015. “GAVI provides funds for countries to jump-start the introduction of newer vaccines, which they would otherwise never have the fiscal (capacity) to do,” Dr. Zulfiqar Bhutta, a leading paediatrician heading the women and child health unit at the Karachi-based Aga Khan University, told IPS.

This is done by procuring highly subsidised vaccines in bulk directly from manufacturers. ”After a negotiated period, countries (are expected) to pick up the vaccine tab,” he said. According to Bhutta, the “critical task remains” of increasing routine vaccine coverage from 60 percent to 90 percent of all children, if the country hopes to stay on track for achieving the fourth MDG.

In addition, Bhutta said, there remains the challenge of “ensuring that these vaccines reach the poor and are not leaked or sold in the open market”.  Dr. Ifra Sameen, another paediatrician at the NICH, is also sceptical about the vaccine “reaching those in need”.

Khawar believes awareness is vital. Unless all caregivers, whether mother, father or grandparent, are fully convinced of the importance and benefits of the vaccine and ensure their children are immunised against all nine childhood diseases, efforts made by the government, GAVI and other U.N. partners to reduce under-five mortality will not go far.