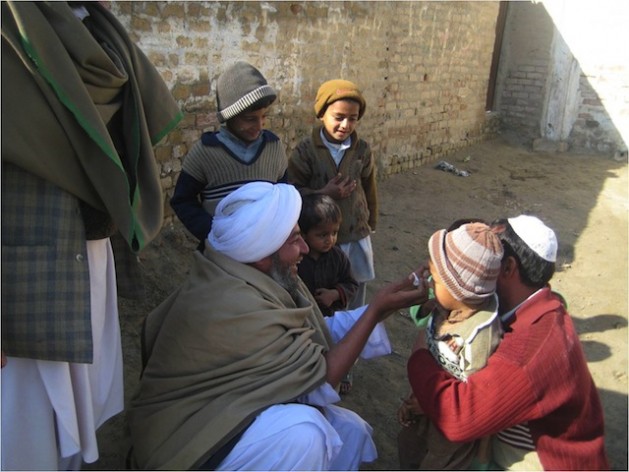 PESHAWAR, Pakistan, Sep 26 2012 (IPS) - Over thirty thousand children in the remote Tirah area of the Khyber Agency, part of the Federally Administered Tribal Areas (FATA) in Northern Pakistan, have waited four years for protection from polio, a viral disease that is sometimes referred to as ‘infantile paralysis’ due to its crippling effects on children.

A massive government and civil society effort through the month of September finally began to reverse the trend that had kept the children of Tirah, along with hundreds of thousands in the greater FATA area, under the shadow of polio.

Up until this year, children in all seven FATA agencies have been the worst victims of the Taliban’s ban on the oral polio vaccination (OPV), which the organisation claims was a ploy by the United States to render the recipients impotent and infertile, thus strangling the growth of the Muslim population.

“Anyone found involved in vaccination-related activities was dealt with sternly,” TTP Spokesman Ihsanullah Ihsan said a statement, adding that the responsibility rested with those who advocated for any kind of vaccination.

Not even professional health workers were spared if they were found to be in violation of the ban.

“Due to the Taliban’s barbarism, such as beheading soldiers and local residents on charge of spying, stoning alleged ‘sinners’ (such as adulterers) to death and targeted assassinations, the Taliban have spread their message about the vaccinations loud and clear,” explained FATA Director of Health, Dr Fawad Khan.

Khan said that more than 6000 FATA health workers had been directed to stay away from vaccine-related work.

Earlier this month officials mounted an offensive against the ban. The government enlisted a local NGO, the National Research and Development Foundation, and religious scholars to hold talks with the outlawed jihadist outfit Ansar ul Islam (AI) to negotiate the terms of a vaccination programme.

He added that AI’s cooperation had enabled 95 percent of the children in the Tirah area to receive the vaccination.

“It is a major breakthrough, as many (previous) efforts to vaccinate children in the Taliban-controlled areas had failed,” officials told the English-language Dawn newspaper, crediting the organisation with protecting 32,641 children from polio.

Officials added that 11,626 children also received the vaccine against measles, while another 3,889 newborns and month-old infants were vaccinated against five other ailments between Sept. 4 and 6.

“Ansar ul Islam and religious leaders attached to the group understand that the poliovirus can cause lifelong disability so they are ready to support the initiative,” according to officials. Only four families refused to vaccinate their children, but efforts are currently underway to convince them otherwise.

Fifty percent of children In Bara, a town in Khyber Agency, had not received the oral polio vaccine (OPV) since October 2009, owing to an ongoing operation against militants in the area.

Officials developed a new strategy to reach the inaccessible children in FATA, which included working in “collaboration with scouts (who) carried out door-to-door visit with the help of local vaccinators”.

Durrani told Dawn that aggressive efforts were underway to ensure immunisation of all 900,000 target children in FATA.

“We are administering OPV to the displaced children of Waziristan in the adjacent districts of Bannu, Tank and Dera Ismail Khan where they live in rented houses or with their relatives,” he said.

He said that more than 25,000 displaced children from Orakzai Agency had been vaccinated in the nearby Hangu district, while 50,000 children In Jalozai had also received the OPV.

“Displacement has been proving a blessing in disguise for the displaced children, who are getting protection against eight vaccine-preventable ailments through immunisation,” Durrani said.

A three-part campaign throughout September saw the immunisation of 600,000 children in FATA while 300,000 were still inaccessible.