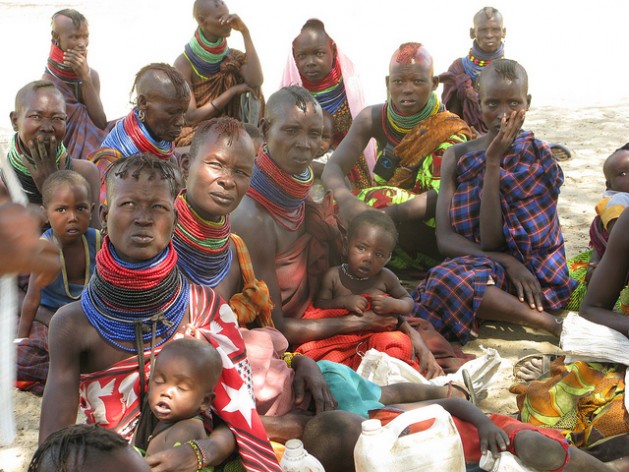 Turkana women in Kenya. Turkana district was one of the hardest-hit areas in the Horn of Africa in the 2011 drought that affected the entire region. Credit: Isaiah Esipisu/IPS

DOHA, Nov 28 2012 (IPS) - The skyscraper Qatari capital city of Doha is a far cry from Cecilia Kibe’s home in Turkana district, a remote area in Kenya inhabited by mostly nomadic communities and pastoralists hit hard by the effects of climate change.

But the agriculturalist-cum-sociologist has come here to the 18th Conference of the Parties (COP18) to the United Nations Framework Convention on Climate Change (UNFCCC), thanks to funding from the Mary Robinson Foundation for Climate Justice (MRFCJ), to sit and listen as scientists, researchers, top government officials and activists argue their case.

Kibe is on a mission – to gather as much knowledge as possible to share with the women in her community. Turkana district was one of the hardest-hit areas in the Horn of Africa in the 2011 drought that affected the entire region.

According to Oxfam International, Turkana district has gone without good rain for about five years. And this has affected the community severely. In 2011 the United Nations news agency IRIN reported “Turkana has experienced malnutrition rates of up to 37.4 percent; the highest recorded in 20 years and more than double the U.N. World Health Organization emergency threshold of 15 percent.”

Back in Turkana district, Kibe runs an information-sharing network that she started because she refused to allow herself and the other women in her village to continue suffering from hunger as they repeatedly lost their crops in the prolonged drought.

“Most women in African rural communities still attribute the impact of climate change to different myths, including that God is upset with people,” Kibe told IPS.

“I work with 4,000 champions (women) who educate their fellow community members and help them come up with adaptation strategies,” she said. She named her organisation Kenya Climate Justice Women Champions, and has now expanded her network to benefit over 3,000 households.

“In turn the women identify their areas of need and, based on the information I get from international conferences such as this one, we start projects that address those challenges,” said Kibe. The projects are funded by MRFCJ.

She said that often the information from conferences such as COP 18 does not filter down to the people most affected by climate change.

“We need to get the information from this conference to help them understand what exactly is happening,” said Kibe.

Top of Kibe’s priority list of things to tackle is food insecurity. And the cultivation of cassava, a drought-tolerant crop, has been identified as part of the strategy to combat this. Previously people in Kibe’s area grew maize, which often failed because of the lack of rain.

Another priority is addressing water insecurity, Kibe said. Back home, women and children have to travel long distances to fetch water, which in many cases is contaminated.

“We have introduced solar water cleaning, which is a technology that uses a device that easily purifies water when placed in the sun,” explained Kibe. “It’s just a press of a button.”

Women are also encouraged to plant five trees each to combat carbon emissions.

What Kibe is doing is important. According to Trish Glazebrook, a researcher from the University of Texas:  “Knowledge transfer is very important because we know that in as much as women need to adapt, they also have to mitigate through climate smart technologies for their farming and sources of domestic energy.”

She told IPS that women in sub-Saharan Africa are not only victims of climate change, but are also contributing to pollution because they lack the technology to improve their farming methods and remain heavily dependent on agriculture, a sector that contributes to global emissions.

But Robinson, who was the first female president of Ireland, said Kibe’s story was a compelling case of why women should be adequately represented at the COP 18.

“A lot of rural women like Cecilia are doing a lot of work on the ground to adapt, but they are hardly recognised and they work with limited resources,” Robinson said.

Speaking at the first ever Gender Day at COP 18 on Nov. 27, Robinson called for more active participation of women in the conference. For more than 10 years gender organisations have advocated aggressively for this day to be recognised in the climate negotiation process.

“We need gender balance in all the UNFCCC bodies, including the attendance,” she said.

“It’s very dumb not to maximise the participation of a group that is over 50 percent of the world population,” she said.

She said she was proud that the gender text was included in the UNFCCC process, although the words needed to be transformed into action.

Mozambican Minister of Environment Acinda Abreu said that society as a whole needed a mind shift to allow women to make meaningful contributions at all levels of the climate change process.

“Adaptation strategies should prioritise the farmers, particularly women who are mainly into subsistence agriculture, and the communities they live in,” she said.

The special advisor at the International Union for Conservation of Nature, Francois Rogers, told IPS that women from all walks of life have to be adequately trained to give them the capacity to participate in policy-formulation processes at the local, regional and international levels.

“It should not be just about meeting quotas, but we should ensure that they have confidence in understanding the issues so that they can fully participate in the decision making,” he said.