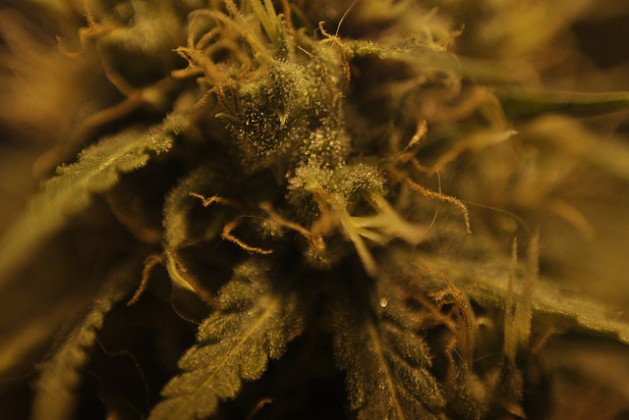 KIBBUTZ NA’AN, Israel , Dec 15 2012 (IPS) - With his shaky hands, eighty-year-old Moshe Roth can barely pour the green powder into his pipe. Seated in a wheelchair, he murmurs in a trembling voice, “Even the scent’s good.”

He survived the Holocaust as a child; he survived a stroke two years ago and almost lost the use of his hands; and he lost his wife last year.

But life’s a bit easier now – with a little help from a pipe packed with pot. “Grieving the loss of a loved one is more bearable with a good pipe between your lips,” he smiles. “It changed my life.

“I imagine you walking with me hand-in-hand, O my forever young, beloved beauty,” says the retired Israeli official and spare-time painter and writer, in a moving eulogy to an old black-and-white portrait of his wife.

Shortly after he takes a hit, Moshe can draw or write with an inspired, confident hand. He’s one of some 10,000 patients who freely, legally consume marijuana in Israel.

At the Hadarim nursing home, cannabis is on the menu of medical treatments. In fact, 19 patients out of 36 use medical cannabis.

“Though we know how to extend life, the pain is great. In geriatrics, the future doesn’t matter any longer. What matters is the now – how to add quality of life to longevity,” explains Head Nurse Inbal Sikorin while opening the safe containing bags of powder and flowers.

Sucked from a syringe, peppered in a yoghourt, administered three times a day in half-gramme doses, cannabis dramatically reduces the need for medication, say doctors, nurses and patients. “Why use painkillers? I feel great with cannabis,” says Rivka Haloup, 85, who suffers from acute arthritis.

Parkinson patients inhale the smoke from a vapouriser six times a day (the nurse wears a mask). But the most potent effect comes from just smoking a joint. “Cannabis doesn’t change reality but makes it easier to accept,” says Sikorin. “At their age, it’s a blessing.”

The “blessing” comes from the pastoral village of Birya, sheltered amidst the Galilee hills.

While some 200 million people worldwide take cannabis illicitly, Israelis take it seriously. Production and use of medical cannabis is legal. A strong medical research sector under adequate government supervision makes Israel one of the world’s most cannabis-friendly countries.

The local industry flourishes. On three acres, the Tikkun Olam farm is the largest of eight greenhouses licenced by the Health Ministry to grow marijuana. Hundreds of kilos are produced year-round from hundreds of heads, all legal.

“Tikkun Olam” stands for “fixing the world” – with a fix of medical marijuana. “We distribute cannabis to patients and through our chain of shops,” explains Research and Development Manager Zach Klein.

The company has a pied-à-terre on Tel Aviv’s Ibn Gvirol Avenue. A guard and closed-circuit TV cameras secure the premises. There’s no sign on the shop, and the metal shutter is pulled down.

But inside, a green world reveals itself. The leafy company logo cites Psalm 118:23:  “This is the Lord’s doing; It is marvellous in our eyes.”

Patients with chronic neurological pain say cannabis is the only drug whose side-effects are welcome. “I’ve tried every pain killer, narcotic and non-narcotic,” says a customer. “This is the first thing that has really helped.”

With all the “holy smoke” paraphernalia on display (bongs, papers, etc), you’d think Tel Aviv was Amsterdam where weed is tolerated (though the sale of the “soft” drug remains technically illegal). People show their medical prescription, and buy the stuff.

The grass comes in all shapes and forms – from chocolate to cake, gum to toffee, honey to balm. At the counter, customers are instructed on how to make the best of it.

Menachem Barabi endured four strokes. He takes 60 grammes of cannabis a month for a mere 370 shekel (100 dollar). “I was in terrible pain, I couldn’t sleep,” he says. “Thank God I take cannabis.”

“I have lymphoma cancer,” says Guy Bar-Yosef. “I lost my appetite and went down 10 kilos. I started smoking joints, and started eating again. It’s healthy, a panacea, a magic potion.”

Tikkun Olam Spokesman Shay Amir shows samples neatly arrayed on shelves. ”This is our flagship product – the ‘Erez’, a great analgesic; plus it stimulates appetite, sleep. You ingest it and work without losing your senses. Here, the ‘end times’ – excellent for multiple sclerosis or osteoporosis. This one’s the ‘Raphael’.”

The “Raphael” is named after Raphael Mechoulam, professor of medicinal chemistry at the Hebrew University of Jerusalem – “the grandfather of cannabis”, as they call him. “It’s an excellent drug for certain things. Nothing’s excellent for everything,” Mechoulam says matter-of-factly.

Tetrahydrocannabinol (THC), the psychoactive chemical compound that is the main active ingredient in cannabis, was first isolated by Mechoulam in 1964.

This year, a new strain which contains Cannabidiol (CBD) as an active compound – and no THC – has just been developed for consumption by patients such as children with cancer.

Israel is at the cutting edge of cannabis science, says Mechoulam. “Government officials look at our research data, and they can’t just say no.”

Here, like in most countries, recreational marijuana use is prohibited. “When you want to enjoy yourself, you don’t go to a doctor,” says Mechoulam.

Yet sometimes, the border between recreational and medical use seems blurred. After all, isn’t it the same substance? “Sick people feel down,” says Klein, Tikkun Olam’s research and development manager. “When people get high on THC, they’re up like normal.”

Researchers and growers are now preparing to move the cannabis industry forward. The government is considering distribution through pharmacies starting next year, “like with any other therapeutic drug,” says Mechoulam.

“Israel can be an example, as it provides alternatives to conventional treatment. Cannabis is one of them,” says Tikkun Olam Managing Director Ma’ayan Weisberg. “And it’s organic.”