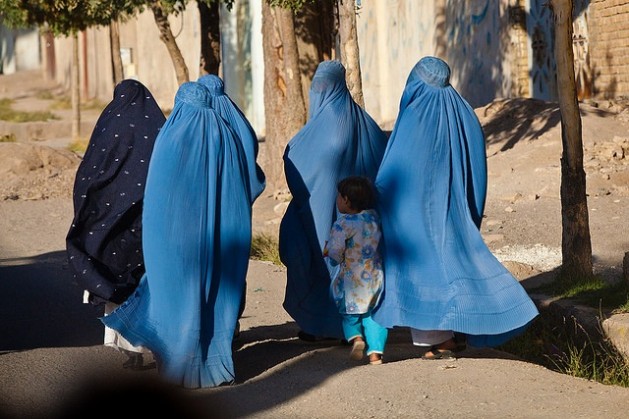 KABUL, Dec 5 2012 (IPS) - Afghan women are no strangers to gender-based violence. For decades now, violent crimes against women have been heading for epic proportions, as young girls are forced into marriage, wives and daughters are abused, and women are dealt harsh punishments for ‘moral crimes’.

Now, officials and rights groups have noticed an alarming surge in these incidents, with crimes against women becoming more frequent – and more savage.

The Afghan Independent Human Rights Commission (AIHRC) estimates a 22 percent increase in cases of violence against women during the last six months of 2012 compared to the same period the previous year.

On Oct. 12, three people were arrested for the murder of a woman named Mah Gul at her home in Shalbafan village in the Injil district of Afghanistan’s northwestern Herat province. The woman’s head had been cut off.

The police arrested her husband and in-laws following a claim by the dead woman’s brother – who took Gul’s body to the office of the Women’s Affairs Department in Herat City – that the family murdered her.

Mahboba Jamshidi, head of the Women’s Affairs Department, confirmed that Abdul Qader, Gul’s brother, had indeed been the one to bring in the body.

“We saw (Gul’s) jugular vein had been slashed. She died due to excessive bleeding,” Jamshidi told Killid.

The case was then handed over to the office of the Attorney General (AG), and the arrests were made.

Mah Gul’s family says their daughter was killed because she resisted her mother-in-law’s attempts to push her into sex work.

This story deserves to be categorised as an unprecedentedly horrific crime, but in fact it is just one example of an increasingly common phenomenon in Afghanistan.

A few months ago, a 20-year-old named Kulsoom, who resisted her abusive husband’s attempt to sell their daughter for money, was brutally murdered by him in her father’s house.

According to Jamshidi, “Kulsoom was against the practice of forced marriages, and had run away with her children to her father’s house. Her husband Anwar followed her there, and killed her.”

Last month newspapers reported the release of a woman, also named Kulsoom, who had been forcibly detained in a “family jail” – a makeshift holding cell in part of an old stable – in Kasho Village in the Teshkan district of Afghanistan’s northeastern Badakhshan province.

Kulsoom said her husband, who was already married, was a very cruel man who kept her imprisoned; she was sexually abused and tortured.

“They (Kulsoom’s husband and his first wife) kept me in a dark room and beat me,” the woman told the media from her hospital bed, where she was shifted after being rescued by the police.

Assistant Professor Zofanoon Hassam, head of the provincial Women’s Affairs Department, said Kulsoom – who was pregnant when she was rescued – delivered a severely undernourished baby after being admitted to the hospital.

Sahar Gul from Darayem district was sold through marriage to a man from the northeastern Baghlan province. Her mother-in-law forced her into prostitution. Earlier this year the police rescued her.

On Jun. 27, armed men beheaded a 13-year-old girl called Shazia for resisting their attempt to kidnap her. Police have made three arrests in the case.

Moreover, she told Killid, “The commission is particularly concerned about the fact that in 80 percent of cases of sexual assault the survivors are teenage girls, under 18 years old.”

Meanwhile, the ministry of women’s affairs says a total of 471 cases of violence against women were registered in 2012. Most of the victims had resorted to suicide or self-immolation, or else run away from the house to escape brutal domestic violence.

Fawzia Amini, director of the legal department at the ministry of women’s affairs, said, “Unfortunately we have seen that more than 50 percent of the cases involve murder, (suicide), self-burning and hanging, as a result of family violence. The violence is more severe than in previous years.”

Parwin Rahimi, in charge of the Women’s Support Department at the AIHRC, believes a lack of security is the leading cause of the rise in violence.

“When everyone has a weapon, and the criminals are being supported by powerful, armed people or a commander, the numbers (of crimes against women) will keep increasing,” she said.

Rahimi added that though the law very clearly states that punishment for perpetrators of crimes against women will be most severe and there will be no amnesty or shortening of their jail terms, politically-connected assailants use Afghan courts to secure amnesty and light sentences.

“We have seen that many criminals who have committed crimes against women are released by (presidential) decree. The lack of law enforcement (is a major reason) for the increase in violence against women.”

The AG’s office stoutly defends its track record. Rahmatullah Nazari, deputy AG, says his office has investigated cases that rights groups were not even aware of.

On Nov. 19, Afghan President Hamid Karzai backtracked on an informal moratorium on the death penalty and signed the final execution warrants of 16 Afghan prisoners convicted of crimes including rape, murder and abduction. The prisoners were hanged.