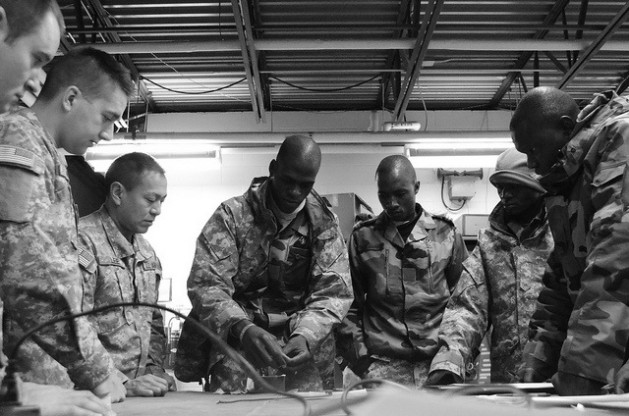 NIAMEY, Jan 23 2013 (IPS) - A column of Chadian soldiers – members of the region’s most battle-hardened army – moved north from Niger’s capital Niamey on Tuesday to join French and African forces battling to free northern Mali from the grip of armed Islamic groups.

For the past year, the north of Mali – nearly two-thirds of the country – has been occupied by armed groups belonging to Al-Qaeda in the Islamic Maghreb (AQIM), the Movement for Unity and Jihad in West Africa (MUJWA), and Ansar Dine. These groups have committed abuses against people in the region while strictly applying Islamic law.

“The Chadian army is the best army in Africa at the moment,” said an enthusiastic Boubacar Tidjani, a young Nigerien international relations student, as the arrival of the Chadian troops in Niamey was announced on Jan. 18. “It’s simple: they have always known war and more, they are proud. I admire them for that.”

The Chadian government will eventually deploy a total of 2,000 soldiers to support French and Malian troops fighting against the militant groups in northern Mali, and more soldiers from the Economic Community of West African States (ECOWAS) will eventually join the operation.

According to the Reuters news agency, Chad’s troops moved along the road to Ouallam, some 100 kilometres from the Malian border, on Tuesday, in order to enter the war zone without first passing through Mali’s capital Bamako.

Their participation has raised hopes of a quick end to the crisis in Mali, where the Chadians’ reputation as warriors precedes them.

The Chadian army has experience fighting in a desert climate, suppressing numerous internal rebellions in an arid environment identical to that of northern Mali. Chad also fought and won a border war with Libya between 1983 and 1987.

Its forces number 30,000 in total and have regularly taken part in stamping out insurgencies in neighbouring countries. The army’s most recent intervention was in December 2012, in support of the Central African Republic’s government against a threat by rebels from a coalition known as Seleka.

The deployment to Niamey was confirmed on Friday, Jan. 18, by a member of the Chadian army, who told Agence France Presse, “Our units left on three aircraft. Their tanks were transported by a C-130, their pickups in an Antonov and the troops flew in a Boeing belonging to the Toumai Air Tchad company.”

During a Jan. 19 conference organised in Niamey by the civil society organisation Alternative Niger to consider the regional consequences of the military intervention in northern Mali, its secretary-general, Moussa Tchangari, raised the possibility of opening a second front in northern Niger, in order to trap the terrorist groups being hunted by the French and Malian armies.

Speaking at the conference, Olivier de Sardan, a researcher at the Niamey-based Laboratory for Studies and Research into Social Dynamics and Local Development (LASDEL), said that northern Mali and northern Niger are contiguous, “raising the fear that after Mali, the next country on the list of narco-terrorist groups will be Niger”.

The Nigerien army does not have the reputation or effectiveness of the Chadian army. Despite its frequent involvement in pushing fighters from AQIM and MUJWA back from its border with Mali, the Nigerien army expects to contribute only 500 soldiers to AFISMA, the African-led International Mission to Mali. The Chadian reinforcement will be welcome, analysts say.

Two concerns remain over Chadian participation. The first is linked to accusations, levelled against the armed forces, of abuses against civilians. Human Rights Watch has gathered testimony about such abuses committed during the Chadian intervention in the Central African Republic in 2008.

The second worry is over possible repercussions for Chad itself. Speaking to Germany’s Deutsche Welle Radio, political scientist Helga Dickow, from the Arnold Bergstraesser Institute in Freiburg, said, “Boko Haram has already indirectly threatened President (Idriss) Déby with the destabilisation of Chad, if Chadian troops are sent to Mali.” Boko Haram is the terrorist Islamist group currently active in the north of Nigeria and which has links with AQIM.