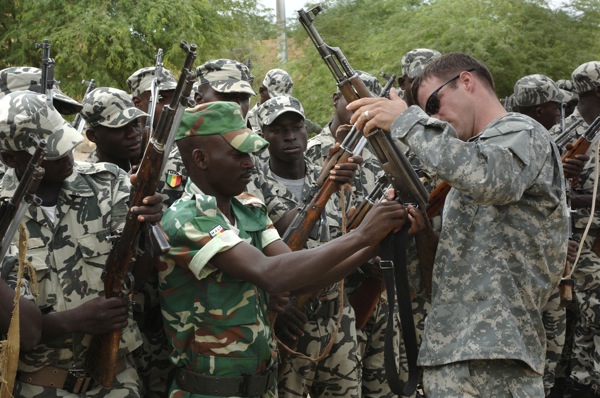 The United States has poured money into training the Malian military in the last several years. Above, U.S. Special Forces inspect weapons in Mali in 2007. Credit: The U.S. Army/ CC by 2.0

Panetta added that the U.S. government is readying plans for assistance in the ongoing operations, which scholars and human rights workers worry could continue for an extended period.

“I commend France for taking the steps that it has, and we have promised…to provide whatever assistance we can to try to help them in that effort,” Panetta told reporters on Monday.

“We have a responsibility to make sure that Al Qaeda does not establish a base for operations in North Africa and Mali,” he continued. “The effort is to try to do what is necessary to halt [rebel] advances and to try to secure some of the key cities in Mali.”

On Friday, the French government authorised airstrikes and ordered 550 French troops into Mali, where for 10 months the massive northern section of the country has been under the control of a combination of Islamists, ethnic Tuareg nationalists and criminal gangs. In March, the weak government in Bamako fell to a military coup, creating a power vacuum in the north.

Since then the international community has debated how to proceed. While France, Mali’s former colonial power, has pushed a military option, others such as the United States and the United Nations have been more cautious.

Still, in December, Washington and Paris co-sponsored a U.N. resolution that allowed for a military operation carried out by the West African grouping ECOWAS, for which the United States has offered training. (Washington is barred by law from training the Malian army until democratic elections are held.)

The ECOWAS force is not expected to be ready to enter Mali until the fall at the earliest, however. Meanwhile, Islamists reportedly linked to Al Qaeda have continued advancing against the Malian military. The French actions over the weekend sought to halt rebel attempts to take the central city of Konna, a strategy with which Washington appears to agree.

“It was clear to France and to all of us that that could not be allowed to continue,” Panetta said Monday. “That’s the reason France has engaged, and it’s the reason that we’re providing cooperation to them in that effort.”

While Panetta refused to offer details of new U.S. assistance, he did state that there would be “some limited logistical support” and “intelligence support”, as well as “some areas of airlift”.

Both the United Kingdom and Canada have stated that they would send aircraft to assist in the Mali mission. The European Union on Monday said that it would not send any combat mission to North Africa, although it publicly supported the French decision.

While France’s move appears to have taken observers by surprise, the strikes are reportedly received with cautious relief by many Malians.

Mali’s interim president, Dioncounda Traore, has been pleading for an intervention. And Oumou Sall Seck, the first woman mayor elected in northern Mali, warned in an opinion piece published in late December, “Immediately reclaiming northern Mali from violent extremists must become a priority. And it can’t be done without international help, especially from key powers like America and France.”

With international action now underway, however, the mission’s exact scope is unclear. “I’m very surprised that things moved so quickly, given that there had been no movement and just a lot of talk for some time,” Susanna Wing, a professor at Haverford College who has written widely on Mali, told IPS.

“The French are clearly operating in the hope of a rout, but that is not likely to happen quickly. I’m worried this could go on and on and result in a real civilian catastrophe. It’s important to remember that there’s already a humanitarian crisis in Mali, with some 400,000 refugees having fled.”

Humanitarian groups are sounding the alarm, with Medecins Sans Frontieres and Amnesty International on Monday calling on international forces to protect civilians and health infrastructure.

While rumours surfaced on Monday of greater U.S. involvement in the fast-evolving situation in Mali, Wing says such involvement seems unlikely.

“Intelligence support, troop training – that seems reasonable, but I would be very surprised if there were anything other than that,” she says. “Since Somalia, everyone knows the U.S. isn’t going to move to put troops on the ground anytime soon.”

A more recent memory guiding many international actors, including the United States, may be that of Libya. The 2011 intervention and the resulting outflow of both weapons and fighters are widely regarded as having led directly to the subsequent spike in violence in Mali.

Washington has been building up a covert network of Special Forces bases and operations in Africa over the past decade, and the sudden and dramatic decline in stability in Mali in the past year has come as a stinging surprise to many U.S. policymakers, particularly in the military.

According to new analysis published on Monday in the New York Times, Washington under President Barack Obama has spent upwards of 600 million dollars in a “sweeping effort to combat militancy” in North Africa. The effort has included a significant focus on Mali, which was regarded as a bastion of stability and where the United States has poured money into training the military.

“Has this backfired?” Wing asked. “The Malian military training that was provided was useful, but what the U.S. government was not doing was putting all the pieces together.”

For instance, she said, the Pentagon should not have been surprised by discontent within the military that led to this spring’s coup. Furthermore, despite a key move during the 1990s to integrate ethnic Tuareg into the state military, Wing noted that little effort was put into actually resolving longstanding northern grievances of underdevelopment and decentralisation.

“The U.S. was always just looking at fragments of the picture and saying they would continue to support the situation through training operations,” Wing said. “It’s piecemeal intelligence – in Mali, somehow, the whole picture was never seen.”