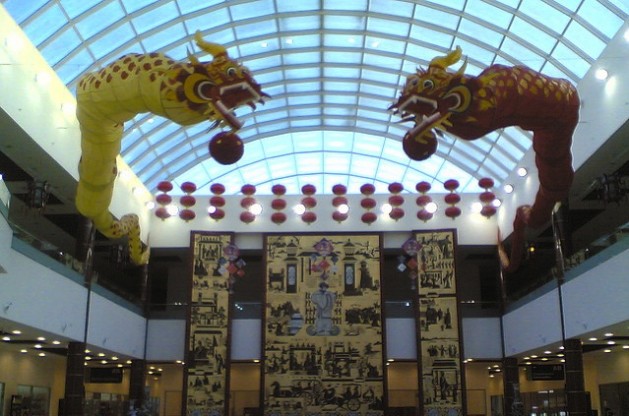 MEXICO CITY, Jan 22 2013 (IPS) - “We are completely ‘clueless’ when it comes to China.” This statement by Enrique Dussel, director of the Centre for China-Mexico Studies of the National Autonomous University of Mexico, perfectly describes the currently stale state of relations between the two countries.

“We have no policy to speak of for China. There’s no strategy that adequately reflects China’s global importance and does justice to our second leading trade partner. We seem to have hit an all time low. I don’t think economic and trade relations can get any worse,” Dussel said in an interview with IPS.

China is Mexico’s second biggest trading partner, behind the United States, yet no efforts have been made by the Latin American country to modify its highly negative bilateral trade balance with the Asian giant or to attract Chinese foreign direct investment (FDI), which is marginal.

This distancing of the two countries is best illustrated by the controversy over the construction of the Dragon Mart retail complex, planned by local and Chinese investors for the area surrounding the southeastern town of Puerto Morelos, some 1,634 kilometres south of Mexico City.

The mega-project, announced in 2011, will cover 192 hectares in total, including storefronts, storage facilities, and luxury residences, with an estimated investment of more than 1.5 billion dollars and some 6,000 new direct and indirect jobs, according to Mexican press sources and the official Chinese newspaper, ‘China Daily’.

This sprawling infrastructure is set to be the trade platform from which Chinese-made goods will be supplied to all of Latin America, and it will create a Chinese enclave in a major tourist hotspot, as it will be located just 34 kilometres from the resort city of Cancún, in the Mexican state of Quintana Roo.

The project has raised concerns in Mexico, Latin America’s second largest economy, where both the leading business associations as well as academics and environmentalists have expressed their objections, fearing that the shopping complex will foster smuggling, unfair competition and the sale of counterfeit products, in addition to causing the area environmental harm.

Ricardo Samaniego, director of the Applied Economics and Public Policy Centre, strongly opposes the project, telling IPS that construction of “Dragon Mart must be put off until its environmental and socioeconomic costs are assessed.

“The project is part of a strategy deployed by China to secure energy and natural resources. Chinese involvement in commercial projects is subsidised by the government,” he argued.

In his opinion, “increasing worldwide complaints against Chinese trade practices and the project’s negative economic externalities” compound the situation.

“Mexico must hold out for a more reciprocal deal before it makes certain concessions. And this has to do with the country’s general policy towards China,” the expert noted.

The Dragon Mart complex projected for the leading port of Quintana Roo replicates and expands the huge Dragon Mart established by China in 2004 in the United Arab Emirates (UAE) city of Dubai.

At the same time, criticisms of the project feed China’s wariness to invest in Mexico and explain why economic and trade relations between both countries are tense, despite maintaining full diplomatic ties since 1972.

Mexico has a high trade deficit with China, having purchased 52 billion dollars worth of Chinese goods in 2011, while selling products to that country for a value of only two billion dollars.

China’s FDI in Mexico is equally discouraging, although the two countries give different figures for this indicator. Mexico’s Finance Secretariat puts the figure at 157 million dollars in 2011, while Beijing says it was almost four times that much, roughly 614 million dollars.

Both governments agree that Mexican investments in China that year were barely above 100 million dollars.

China’s meagre investment in Mexico is underscored by the fact that the United States’ FDI in the region was upwards of eight billion dollars that year and 15 billion dollars the year before, according to the United Nation’s Economic Commission for Latin America and the Caribbean (ECLAC).

A group of 100 academics, politicians and business operators, under Dussel’s coordination, have drafted a Strategic Agenda for Mexico-China Relations, in which they highlight the absence of a “short, medium and long term (plan) for China, which affects economic and trade relations.”

The proposed agenda was presented to Mexican President Enrique Peña Nieto last December, immediately after his inauguration on the first of that month, and it calls on the government to prioritise a strategy with Beijing, given “the great involvement of the Chinese public sector in trade and investment.”

It also cautions: “If political and strategic talks between the two do not improve, it will be hard to solve and negotiate other pending binational issues.”

The proposal, which examines economic, trade, environmental, educational and cultural aspects, notes that China does not invest in Mexico because of the country’s widespread insecurity, the local government’s failure to grant trade benefits, and the lack of support for joint venture investments with Chinese capital.

The friction caused by the Dragon Mart project in which Chinamex Middle East Investment & Trade Promotion Centre – an overseas promotion effort of China’s Ministry of Commerce – is involved, fuels an already tense relationship.

The experts consulted described the two countries’ relations as “dysfunctional” and observed that the problem is more than economic.

In October 2012, the Felipe Calderón administration (2006-2012) filed a complaint against China with the World Trade Organisation (WTO), accusing it of granting subsidies prohibited by that body to textile and garment industries, a sector in which China and Mexico compete for the United States market.

In the first week of January, one of Peña Nieto’s first measures as president was to postpone a 25-20 percent tariff reduction for Chinese garments and footwear until 2014, in response to a demand from local textile and shoe manufacturers.

The poor relations between these two nations have had numerous repercussions, including Mexico’s failed bid for the International Monetary Fund’s head position in 2011, as China turned its back on Mexican candidate Agustín Carstens.

“Mexicans disagree on the stance to take, as some sectors call for a strengthening of relations while others want nothing to do with China,” Dussel said.

In November, before taking office, Peña Nieto met with a delegation of one of China’s leading state banks, the Industrial and Commerce Bank of China (ICBC). But his administration has not given any hints as to how it will address its bilateral ties with China.

The Strategic Agenda for 2013 recommends creating a 50-million-dollar credit programme to promote exports to China, and establishing a Chinese Investment Attraction Fund, with 40 million dollars a year, to bring in capital from Beijing.

“China’s trade practices have not been very transparent. Mexico has to pay close attention to these practices. In the case of the Dragon Mart project, the government’s position was remote,” Samaniego said.

Dragon Mart has generated a current of negative opinion and Beijing can read and, better still, interpret the signs, the experts said.