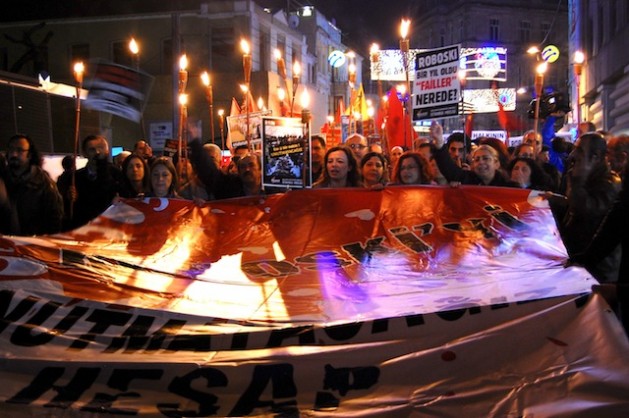 A Roboski solidarity march in Istanbul this past December. Credit: Jillian Kestler-D’Amours/IPS

ISTANBUL, Jan 15 2013 (IPS) - After over a year without accountability for a Turkish aerial bombing that killed 34 Kurdish men and boys, Turkey has come under heavy criticism for what many say is a widespread culture of impunity, especially when it comes to the treatment of its Kurdish citizens.

“It has been one year and there are no important steps we can see. Nobody has been arrested,” said lawyer Tahir Elci, head of the Diyarbakir Bar Association, which represents over 800 lawyers working in Turkey’s largest Kurdish-majority city.

“Usually, the prosecutors and other authorities protect the perpetrators and there are many barriers before the victims when they try to get justice,” Elci told IPS. “Even if perpetrators have not been punished, it is very important for relatives of victims to learn the truth.”

On Dec. 28, 2011, Turkish air force jets bombed a group of Kurdish villagers who were smuggling goods – sugar, fuel and cigarettes – from Iraqi Kurdistan back over the Turkish border along a well-known trading route.

Using drone footage of the area, Turkey reportedly mistook the group for fighters from the outlawed Kurdistan Workers’ Party, or PKK, which is deemed a terrorist group by the United States and the European Union, among others.

Seventeen children were among those killed in the bombing, known as the Uludere or Roboski massacre, after the name of the village (in Turkish and Kurdish, respectively) where it took place.

The government set up a commission of inquiry into the incident in January 2012, but conclusions are yet to be released. The prosecutor’s office in Diyarbakir, which has been tasked with leading a criminal investigation into the killings, has neither completed its work nor released any of its findings.

“The lack of progress in an entire year on completing any investigation of the Uludere (Roboski) incident is very troubling because it is consistent with (authorities’) overall reluctance to account to the public for the government’s wrongdoing,” said Emma Sinclair-Webb, a researcher on Turkey at Human Rights Watch, in a statement.

“Holding state authorities who killed civilians accountable is crucial to upholding democracy and the rule of law,” she stressed.

The murder of three Kurdish human rights activists – including a co-founder of the PKK – in Paris last week has also drawn international attention to the ongoing struggle for Kurdish rights.

Some analysts have said the killings, which local police described as professional executions, may have been meant to derail a potential peace agreement, as Turkish Prime Minister Tayyip Erdogan re-started peace talks with imprisoned PKK leader Abdullah Ocalan in early January.

Umut Suvari is a board member of the Diyarbakir city council, and founder of the Youth and Change Association, which provides training and empowerment activities for Kurdish youth.

He explained that a young generation of Kurds is growing up more radical than their parents, thanks to increasing political pressure on Kurdish citizens.

Human rights groups estimate that the Turkish government has arrested thousands of Kurdish citizens over the past few years, including local mayors, academics, and lawyers. Many have been rounded up for alleged affiliations to the Union of Kurdistan Communities (KCK), a civil society group that the government views as the urban wing of the PKK.

In 2012, Turkey had jailed the most journalists of any country worldwide. Most of these journalists were Kurds imprisoned on terrorism-related charges.

According to the New York-based Committee to Protect Journalists (CPJ), “Broadly worded anti-terror and penal code statutes have allowed Turkish authorities to conflate the coverage of banned groups and the investigation of sensitive topics with outright terrorism or other anti-state activity.”

Kurdish language instruction was also only introduced to Turkish public schools as an elective course earlier this year. Before that, students were prohibited from speaking their mother tongue.

“People don’t care anymore. They are joining demonstrations knowing they are going to be arrested,” Suvari told IPS from his office in Diyarbakir, referring to increasingly disenfranchised Kurdish youth.

“But we are teaching (youth) something different here. They can see how they are powerful when they get involved. When you give them a chance, they are doing great things.”

Twenty-eight-year-old Kurdish activist Emrah Ucar was raised in Diyarbakir, but never learned to speak his family’s native language. Despite this, he said growing up in the city gave him a heightened political consciousness at a young age.

“It would be different if I grew up in Istanbul, but I grew up in Diyarbakir and witnessed many things,” Ucar told IPS. “We’re not afraid to lose anything because a lot of family and friends are already in jail.”

Ucar helped organise an event in Istanbul in late December to commemorate the one-year anniversary of the Roboski killings. Dozens of intellectuals and artists participated, and the event was broadcast live online, where it has since garnered over 500,000 views.

“In order to understand Roboski, (people) have to understand history. Kurds have been killed regularly and systematically since the establishment of the (Turkish) Republic. You don’t have to be a guerilla in order to be killed by the Turkish state. The Kurdish question did not start with the PKK,” he said.