OP-ED: Climate Inaction Is a Clear Failure of Democracy

UXBRIDGE, Canada, Jan 4 2013 (IPS) - Around the world, 2012 was the year of extreme weather, when we unequivocally learned that the fossil fuel energy that powers our societies is destroying them. Accepting this reality is the biggest challenge of the brand new year. 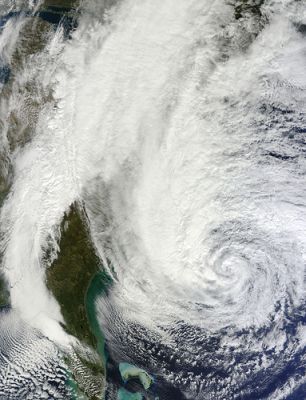 Re-engineering our societies and lifestyles to prosper on green alternatives is the penultimate challenge of this decade.

There is no more important task for all of us to engage in because climate change affects everything from food to water availability.

A number of scientific analyses have demonstrated we already have the technology to re-engineer our society to thrive on green alternative energy. The newest of these was published Wednesday in the prestigious journal Nature. It plainly states that politics is the real barrier, not technology nor cost. (It is far cheaper to act than not.)

Keeping global warming to less than two degrees C is mainly dependent on “when countries will begin to take serious action to reduce greenhouse gas emissions”, according to the study “Probabilistic cost estimates for climate change mitigation”.

Climate change has already pushed global temperatures up 0.8 degrees C, with significant consequences. No climate scientist thinks two degrees C will be “safe”. Many countries, especially least-developed countries and small island states, want the global target to be less than 1.5C of heating. Even then large portions of the Arctic and Antarctic will continue to melt raising sea levels, albeit at a slower rate.

Delay in making the shift to non-fossil fuel energy sources will be very costly. Waiting until 2020 to curb global emissions will cost twice as much compared with peaking emissions by 2015, the Nature analysis shows.

Serious action to reduce greenhouse gas emissions means 65 percent of current coal power plants will have to be shut down in the next decade or two, a previous Nature study reported by IPS shows.

Instead of serious action, global emissions continue to break new records, rising about three percent per year. It appears 2012 will be about 52 gigatonnes (billion metric tonnes of CO2 equivalents). This is our annual climate scorecard, the most important number in human history. That number needs to fall to be between 41 and 47 gigatonnes (Gt) by 2020 to have a reasonable chance of staying below two degrees C of warming.

Current emission reduction commitments by countries are not nearly enough, likely to result in emissions of about 55Gt in 2020, studies estimate. Despite knowing this and knowing 11 of the last 12 years were the warmest ever measured, countries refused to increase their reduction targets at the most recent United Nations climate conference in Doha last December.

An extremely wealthy and powerful fossil fuel industry is behind this political failure to act. Just like the tobacco industry before them, the fossil energy industry spends hundreds of millions of dollars on misinformation about climate change and lobbyists to fight against any action to reduce fossil fuel use.

Their only interest is increasing their profits through increased sales of coal, oil and gas.

The fossil fuel industry could transform itself into good corporate citizens through the provision of green energy services that our societies need. But they have refused to do so over the past 20 years despite making promises to do so.

Survey after survey show the public wants action on climate. And since no one wants their children to live in a catastrophic four-degree C superheated world, the failure to take serious action on climate is a clear and absolute failure of democracy.

The only way this will change, and the only way to get action, is if people take responsibility for the future and march on their capitals demanding action, refusing to leave until there is. To get action we all must act.

Time is short. There are just 24 months to 2015 when emissions need to begin to decline. There are no other options left but to march in the streets. The environmental organisation 350.org is organising one such march Feb. 17 in Washington D.C.

*Stephen Leahy is the lead international science and environment correspondent at IPS. Based in Uxbridge, Canada, near Toronto, Steve has covered environmental issues for nearly two decades.