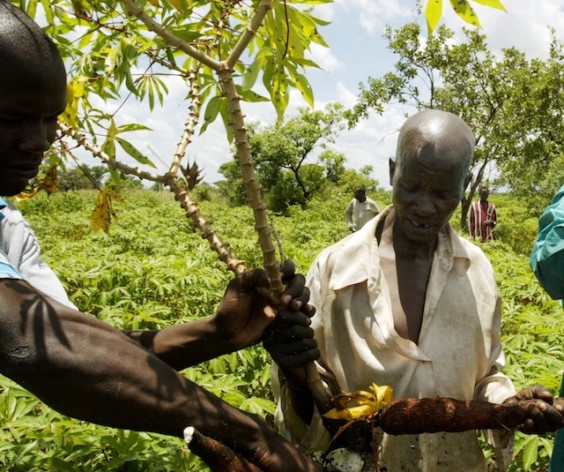 KAMPALA, Feb 13 2013 (IPS) - Unless African smallholder farmers, who comprise the majority of food growers on the continent, are given the tools and knowledge to cope with the increased occurrences of plant virus diseases, the livelihoods of millions will be at stake, according to Nteranya Sanginga, the director general of the International Institute of Tropical Agriculture.

“Plant viruses are spreading rapidly to new places, frustrating efforts to boost the food security and livelihoods of millions of people. Poor smallholder farmers, who are the majority of food growers and the bulk of the population, are bearing the brunt of these virus diseases with their limited resources,” Sanginga told IPS.

Cassava mosaic disease (CMD), sweet potato virus disease, maize streak virus and cassava brown streak disease (CBSD), are just a few of the plant viruses that have been prevalent in Africa in the recent past. A plant infected by CMD will display pale white or yellow leaves, leaf distortion, and stunted growth.

However, the symptoms for a CBSD-infected plant are less obvious as only small yellow patches on leaves indicate the presence of the disease. Most farmers are only able to identify the disease once they have harvested the plant as CBSD distorts the root and causes it to rot.

First identified in Uganda’s Mukono District in 2004, CBSD has since spread throughout the Great Lakes region of East Africa, resulting in a 30 to 70 percent loss in cassava harvests. The crop is a major staple food in Uganda, with annual production estimated at 5.5 million tonnes.

According to IITA, CBSD threatens the food security and livelihoods of over 200 million people in East and Central Africa. Combined, CMD and CBSD have caused more than one billion dollars worth of damage to cassava, with smallholder farmers being affected the most by the loss.

Chris Omongo, a cassava breeder at Uganda’s National Agricultural Crop Resources Research Institute, told IPS that some farming practices have aided the spread of the viruses.

“When you move infected materials from one location to another, you automatically help to spread the viruses,” said Omongo, adding that most farmers unwittingly share infected seed and seedlings.

Bulasio Luyiga, a smallholder cassava farmer in Central Uganda’s Mukono District, is one of them.

“The crop looked so healthy, but at harvest, each tuber was rotten,” he told IPS. The CBSD generally attacks the root of the cassava, though the leaves of the plants can also be affected.

Luyiga said he lost more than 70 percent of the crop to the virus. “It was a total loss because I bought what was considered clean, planting material, only to discover that they were susceptible to this disease. I wouldn’t have planted them had I known this early,” said Luyiga.

Omongo said that if given the knowledge, smallholder farmers can prevent plant virus diseases from spreading. “Once farmers know how to identify the diseases, then they will avoid it. They are also too poor to afford the improved varieties of plants resistant to disease. The point is to create awareness and we shall prevent the spread,” he said.

Another factor that needs to be addressed in combating the spread of plant diseases is one of resources. Luyiga and farmers like him rarely have access to agricultural advisory and extension services that could provide them with the knowledge on how to identify and deal with the plant viruses. Such services are limited in most East African countries and when available tend to be poor in quality.

In Uganda, one extension worker is required to offer services to over 1,000 farmers in a sub-county, which, Omongo said, limited early detection and prevention of the spread of the diseased plants.

Professor William Otim-Nape, a Ugandan Plant Pathologist and member of the Africa Innovation Institute, told IPS that viral diseases continue to cause major economic losses in Africa. “Such losses remain grossly underestimated and they are often ignored or overlooked,” he said.

Otim-Nape added that the number of trained plant virologists in Africa was far too low to provide an adequate response to deal with the many plant viruses.

“A critical mass of trained plant virologists is required to identify and prioritise virus disease problems and to create awareness in the public and among policymakers,” he said.

Sanginga agreed. “There is an urgent need to confront viral diseases affecting staple crops like cassava, banana and maize using advances in science. We need science to solve these problems,” he said.

“We have to do more for the farmers I met in Mukono, Uganda, who lost their entire cassava crop due to CBSD and CMD,” Sanginga urged, adding that Kenya, Tanzania and Uganda, too, will need assistance to deal with the threat of Maize Lethal Necrosis Disease.

East Africa experienced a CMD outbreak in the 1990s and smallholder farmers watched as it devastated their cassava gardens, forcing thousands to abandon the crop. The disease spread to several African countries including, Rwanda, the Democratic Republic of Congo, Burundi and Gabon until researchers bred a cassava variety resistant to the disease. The release of a new variety restored cultivation of the crop.

But current low budgetary allocations for agricultural research in most East African countries has limited the investment in plant viral diseases research, according to Mercy Karanja, the Bill and Melinda Gates Foundation regional advisor to East Africa.

“We have big problems in agriculture. So we need to invest money to do research. And even when products of research are out, you need money to ensure that they reach farmers,” she told IPS.