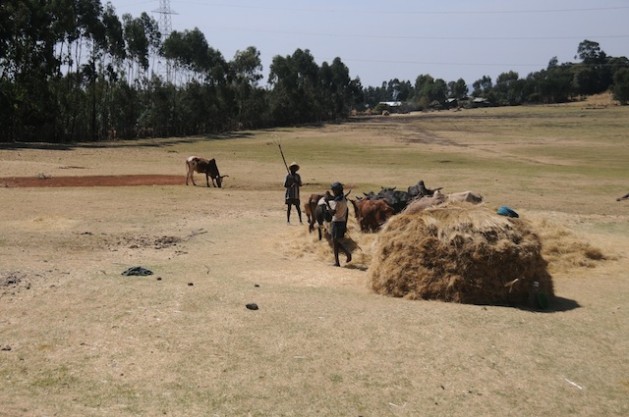 Development organisations are promoting the view that sustainable development in African countries should be generated by a partnership between large corporations and small farmers. Credit: Elias Asmare/IPS

ADDIS ABABA, Dec 23 2012 (IPS) - Africa’s smallholder farmers, who contribute 80 percent of food and agricultural production in sub-Saharan Africa and much of the world’s food supply, are being encouraged by big business, governments and NGOs to become less subsistence based and more entrepreneurial by tailoring production to market forces.

“Increased productivity and value-chain involvement should address weaknesses in Africa’s food economy and create employment opportunities by engaging smallholder farmers in agro-processing, packaging and the marketing of their products,” John Moffett, director of policy and strategy at Self Help Africa, an NGO that works with rural communities to bring sustainable solutions to the causes of hunger and poverty, told IPS.

The question is: can Africa balance the task of feeding a population of two billion by 2050 and at the same time accommodate the interests of global food retailers who are hungry to capitalise on the continent’s resources, markets and smallholders?

Michael Hailu, director of the Technical Centre for Agricultural and Rural Cooperation, which works to advance agricultural and rural development in African, Caribbean and Pacific countries, told IPS that the private sector needed to play a greater role in smallholder agriculture as their increased participation in agricultural value chains was essential to stabilising global food supply and developing the livelihood of Africa’s smallholders.

“More than at any other time in the past, agriculture has been getting considerable global and national attention, particularly after the 2007-2008 food price crisis. As a result, the sector is attracting the policy and investment support it needs to fulfil the goals of food security and economic growth.”

Against a backdrop of volatile food supply and climatic uncertainty, global food retailers and agribusinesses want to prioritise smallholder farmers more than ever. Many large companies like Unilever and Walmart are claiming that the livelihood of smallholders is critical to the commercial expansion of giant food retailers.

David Hughes, professor of food markets at Imperial College, London, told IPS that the emphasis on smallholders was a commercial imperative and not just a corporate social responsibility afterthought.

“If they don’t get on the green train then they know they won’t have a long-term business. I think we will start seeing businesses making radical changes to their business models over the next 10 years.”

Development organisations are also promoting the view that sustainable development in African countries should be generated by a partnership between large corporations and small farmers.

Farm Concern is an Africa-wide market development organisation that advocates smallholders need to be market savvy and strategise production to satisfy the demands of the market in order to break out of subsistence agriculture.

The NGO promotes a smallholder “Commercial Village” model to help producers respond to the needs of food security and market forces.

The United Kingdom is also busy promoting the role of the private sector in smallholder agriculture.

Its Department for International Development is funding the creation of smallholder farmer linkages with the U.K.’s food retail industry and supermarkets to create opportunities for Africa’s farmers to export more of their products to U.K. supermarket shelves.

The partnership between Taylors U.K., a Yorkshire tea brand, and Rwandan smallholder tea growers is one example of how the U.K. government has helped facilitate the entry of giant retailers into Africa. This alliance resulted in the training of 10,000 farmers and 1,800 producers, and a 40 percent increase in the minimum wage for Rwanda’s small-scale tea producers.

Global food retailers are also getting excited about the high growth potential within emerging markets in sub-Saharan Africa. The International Monetary Fund (IMF) forecasts a 5.7 percent economic growth in 2013. This growth, according to the IMF, is being driven by rising commodity prices.

Global food retailers have seen these trends as opportunities for integrating smallholders into more sophisticated value chains to satisfy the new demand.

They aim to sell one billion dollars in food from small-scale farmers by 2015 in a bid to demonstrate a commitment to sustainable development.

Resource-constrained African smallholders are being lured by promises of greater access to credit, inputs, improved seed varieties, and market training opportunities, and the promise of a greater financial return.

Agricultural growth is more important for Africa than for any other continent. Africans depend on agriculture and non-farm rural enterprises for their livelihoods, yet they are also unable to meet their basic food needs due to population pressure, the effects of climate change and land degradation.

According to the New Partnership for Africa’s Development, an African Union programme for pan-African socio-economic development, nutrient depletion in Africa represents a significant loss of natural capital valued at an estimated one to three billion dollars per year. If most of the nearly 70 million smallholder families in sub-Saharan Africa fail within the next decade to adopt sustainable land and water management practices on their farms, long-term food security, productivity and income will be jeopardised.

There is also a risk that cash crops like tea, coffee, tobacco and flowers will become more attractive to smallholder producers than staples, which could damage efforts to make Africa more food secure.

Patrick Mulvay, co-chair of U.K. Food Group, is opposed to the industrialisation of smallholder agriculture and the participation of small African farmers in the corporate food economy. He told IPS that although it might boost production and provide a supply of raw commodities in the short term, in the long term it is unsustainable and destructive.

“African farmers really need support to sustain these food systems, which currently feed more than 70 percent of the world’s population, and they need protection from the industrialised commodity production as they will capture and trash the farmers’ markets, livelihoods and environment in the long term.”

He said he was concerned about how sustainable it was to divert food production towards the demands of giant foreign retailers and global volatile markets when 63.6 percent of household income in sub-Saharan Africa was spent on food. Mulvany was also worried that African countries that are unable to feed their growing population would become vulnerable to revolt as experienced in Tunisia in 2011.