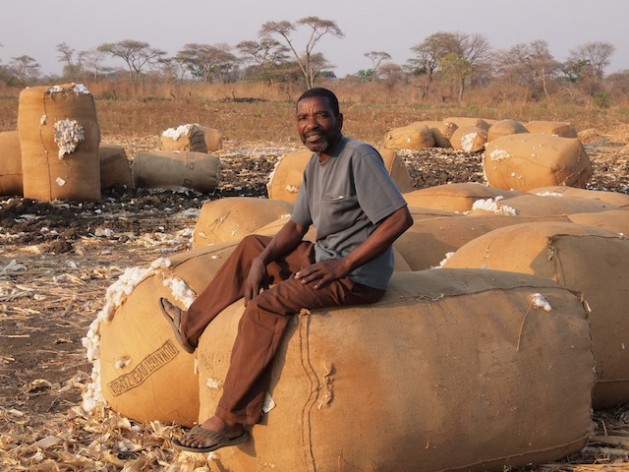 “My biggest problem was tilling the land early enough in the season – I couldn’t manage to do it because I had no implements. I had to wait until the rains started and I was growing half a hectare of cotton and one hectare of maize,” the father of seven told IPS.

But today, his story is different. He has expanded his cotton field from one and a half hectares to 33, and he has acquired new assets, such as a tractor, and even extended his property.

“I have built about eight houses here on my farm, I have bought a tractor and I am sending my children to some of the best schools in the country. I am comfortable,” he said. Gwilize said now he only grows maize for food security, preferring to earn a living from growing cotton.

In this southern African nation, out-grower schemes, also known as contract farming, are entered into according to specific conditions agreed upon between the buyer and farmer beforehand, such as the pricing of the commodity.

The ginning companies provide farmers with inputs such as seeds, chemicals and fertilisers. They also offer technical assistance and a ready market as they buy entire harvests from farmers. The companies then process the cotton and export the product.

Gwilize was contracted by the multinational ginning company Dunavant Cotton. It was a deal, he said, that transformed his farming methods and standard of living.

In addition to money he earns from his own harvest, Gwilize also earns an income from receiving inputs from Dunavant and distributing them to fellow farmers on credit.

“I have so many ways of making money with Dunavant apart from my farming,” he explained with pride. “I recruit other farmers to grow cotton as a cash crop for Dunavant and give out farming inputs loans to them. I get 20 percent monetary commission for every full loan recovery the company makes.”

Gwilize acquired his tractor through a loan facility from Dunavant, and it took him only two years to repay it – the agreed repayment period was three years. Now, apart from cultivating his fields, Gwilize hires his tractor out to other small-scale farmers at a set fee of 46 dollars per hectare ploughed or reaped.

On average, he cultivates five hectares per day, netting a minimum of 2,000 dollars every month from hiring out his tractor.

“I have since employed a full-time driver, and I also have four permanent employees working for me. I have made a lot of profit from this tractor; at this very moment it is out (being used to cultivate land) and I am earning per hectare,” he said.

Nigel Seabrook, managing director for Dunavant Zambia Limited, said the company is currently financing 175,000 farmers countrywide and also assisting them in mechanising their production by selling them tractors that are payable over a three-year period.

“Each farmer benefiting from the programme is able to get better yields and an expansion on their yields due to mechanisation. The tractors will have a direct impact on the farmers and the immediate communities in which their tractors are operating on a long-term and sustainable basis,” Seabrook told IPS.

“We give small-scale farmers the full service; everything they need to be able to get the best yields they possibly can. Therefore, our outreach programme gives the farmer a lot of training and a lot of education in addition to all the inputs.”

Dunavant has been in Zambia for a little over a decade now, working with smallholder farmers to improve cotton production in the country.

In 2011, the company decided to diversify and extend its input financing to other crops – sunflower, soybeans and the staple maize.

“We are buying maize, sunflower and soybeans after funding production in all our depots to give the farmer an all-round package; we really want our farmers to have a very diverse range of products so that they can get the best out of their total land usage,” Seabrook said.

“It is a well-known fact that the cotton industry in Zambia has, for a long time, been critical to the provision of sustainable rural livelihoods and economic development of the nation,” Munthali said.

“So, with the current out-grower programmes being financed by various ginning companies, the situation can only get better. Out-grower schemes, especially driven by the private sector, should be encouraged for all crops if Zambia is to reduce rural poverty.”

Cotton has been an integral part of the Zambian economy over the years. Prior to the wholesale privatisation of industries in the 1990s, Zambia boasted over 140 textile and clothing companies, which employed more than 25,000 people.

But the widespread import of textiles and other clothing has created undue external competition and in the process choked the local industry. Minister of Agriculture and Livestock Emmanuel Chenda told IPS that private sector initiatives in cotton production, such as the out-grower schemes, could be pivotal in reviving the local textile and clothing industry.

“In the absence of affordable credit finance from the banks, these out-grower facilities are greatly assisting our farmers. My government would like to encourage many out-grower schemes to take place in the country even for other crops – it is a good thing,” Chenda said.

The minister, however, accused some ginning companies of giving farmers a “raw deal” by offering lopsided terms and said that the government was working on measures to ensure the negotiation process was more balanced for all the involved parties.

“There must be good business practices and fair play; the agreements must be negotiated in a way that is fair to all the players. The scale must not be tilted towards the provider of the inputs,” he said.

“The situation of last year with some cotton farmers was most unfortunate; some ginning companies made cotton farmers carry the burden of the collapsed market alone, as the input providers hedged their rescue against the returns.”