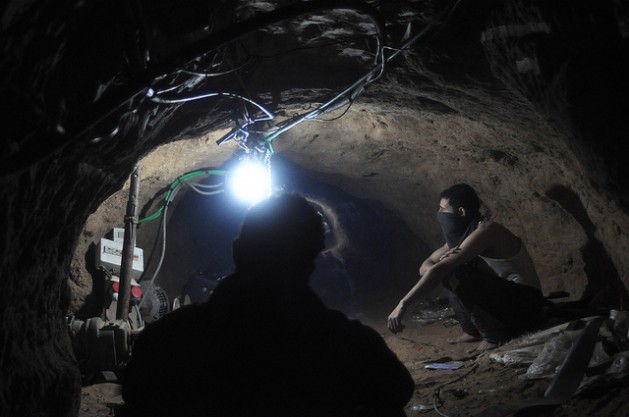 Palestinians in Gaza look to tunnels as their only effective outlet to the world. Credit: Eva Bartlett/IPS

WASHINGTON, Feb 1 2013 (IPS) - The optimism expressed by U.S. President Barack Obama and newly confirmed Secretary of State John Kerry about restarting the peace process between Israel and the Palestinians has been met with scepticism from many seasoned Middle East experts.

At his confirmation hearing, Kerry told the assembled Senate, “I pray that maybe this will be a moment that will allow us to renew the effort to bring the parties to the negotiating table and go down a different path than the one they were on in the last few years. I would like to try and do that.”

Since his re-election, there has been considerable debate in the U.S. media about whether Obama would re-engage in peace efforts between Israel and the Palestinians. It is often the case that second-term presidents engage more in foreign policy and have a freer hand, not having to be concerned about re-election at the end of their term.

Speculation that Obama might put significant effort into Israel-Palestine peace was fueled by his nominees for two key Cabinet posts: Kerry for secretary of state and former Senator Chuck Hagel for secretary of defence. Kerry, though widely recognised as strongly pro-Israel, has voiced sharp criticism in the past of Israel’s policy of expanding settlements in the West Bank and East Jerusalem.

Hagel faced much greater opposition on this score, and his confirmation is less certain than Kerry’s was, though it is expected that he too will be confirmed. Much of the opposition to Hagel stems from a 2006 interview where he said that “…the Jewish lobby intimidates a lot of people (on Capitol Hill)”, and “I’m not an Israeli senator. I’m a United States senator.”

But despite Obama’s choice for the key posts, and a White House statement saying that Obama had pledged “to work closely with Israel on our shared agenda for peace and security in the Middle East,” during his congratulatory call to Israeli Prime Minister Benjamin Netanyahu on the latter’s re-election last week, few see a strong possibility that the new administration will put much effort into the vexing conflict.

“The only other possible answer would be: ‘I’m sick of the whole damn thing, and we’ll just have to wait for new Israeli leadership’ – which is something he dare not say. Mr. Obama is focused on domestic matters – which will command his every attention. He will need every vote he can get to pass his domestic programme, and irritating conservative Republicans and Democrats by making demands on Israel is something that he just won’t do.”

Yet speaking in Washington in a globally broadcast address on Tuesday, outgoing Secretary of State Hillary Clinton voiced optimism.

“I actually think that this election opens doors, not nails them shut,” Clinton said. “So I know that President Obama, my successor, soon-to-be Secretary of State John Kerry, will pursue this, will look for every possible opening… somehow, we have to look for ways to give the Palestinian people the pathway to peace, prosperity, and statehood that they deserve and give the Israeli people the security and stability that they seek.

“I think that still is possible, and I can assure you the United States under President Obama will continue to do everything we can to move the parties toward some resolution.”

Speaking at The Palestine Center in Washington, Yousef Munayyer, the executive director of The Jerusalem Fund, noted that Israel’s ongoing occupation and settlement expansion was a very minor issue in the Israeli election.

“The issue of peace is fading because the cost of occupation has become bearable for Israel and there is no motivation (to change) if the costs are low. The question that needs to be asked in Washington is how can we create incentives so an end to occupation becomes a reality. If we continue to support everything Israel does … we cannot expect it will happen.”

PJ Crowley, former spokesman for the U.S. State Department, told the same audience that the Israel-Palestine issue was no longer the same regional focal point it once was.

“In 2009, President Obama came in knowing that the Israel-Palestine issue is the key driver in the region. We believed that to be true in 2009, but it is not true in 2013,” Crowley said.

“There are new players in region, with (Egyptian President Hosni) Mubarak replaced by (Mohammed) Morsi, who was helpful in ending hostilities with Hamas, but has a much different view of the Palestine issue and has very different dynamics domestically. King Abdullah of Jordan has his hands full with 700,000 Syrian refugees. So Israel-Palestine has been pushed from the top of the list.”

“Frankly, I doubt that Obama…is likely to invest much effort in either supporting or opposing Netanyahu’s Israel now,” Freeman told IPS. “Netanyahu has not only beaten the warmth out of his government’s relationship with its American counterpart, he has left Obama with no basis for engagement with him other than posturing for domestic political effect.”

John Mearsheimer, professor of International Relations at the University of Chicago summed up the pessimism, telling IPS, “Obama will surely go through the motions to make it look like he is serious about pushing the peace process forward.

“I would be very surprised, however, if he makes a serious effort to get a two-state solution, simply because the Israelis taught him in his first term that they are in the driver’s seat and they are not interested in allowing the Palestinians to have their own state. Nothing happened with the recent Israeli election to change that dynamic.”