Victory Close to Defeat for Netanyahu 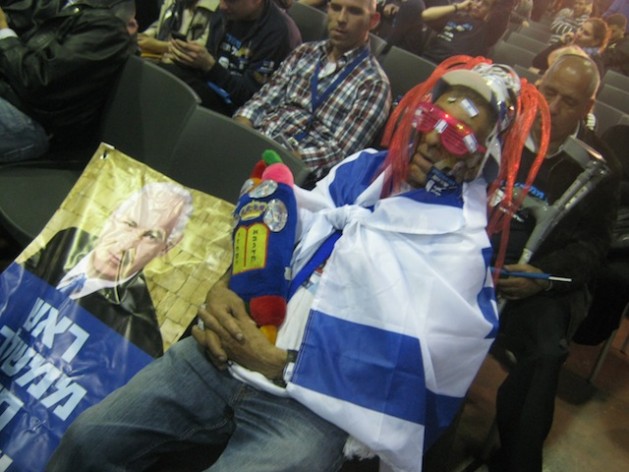 JERUSALEM, Jan 23 2013 (IPS) - As expected, Benjamin Netanyahu has been ensured another term in office. Against all expectations, he could have been defeated. Now, he faces uncertainty over the kind of governing coalition he will lead and thus the kind of policies he will carry out. And he faces a lingering question: can any prospective coalition last?

The initial result was astounding – floating around a tie between Netanyahu’s right-wing camp with 61 seats and his centre-left opposition with 59 seats in the Knesset parliament’s 120 seats.

So, addressing the Israel voter, the self-designate new prime minister decidedly put on a brave face of his own.

“I’m proud to be your prime minister. Once again, you’ve proven that Israel is an exemplary vibrant and dynamic democracy,” Netanyahu harangued his supporters at the Likud-Beitenu headquarters located on the metropolitan’s Exhibition Ground.

Results show that support for the joint Likud-Beitenu list of candidates Netanyahu headed has dropped dramatically, from its previous 42 seats to as few as 31.

Empowered with a strong social programme focusing on cheaper housing for young couples, compulsory draft of religious students exempted from serving in the military and, in general, with an uncompromising fight against social iniquities, Lapid has suddenly emerged as the king-maker of any future sustainable coalition.

“Our responsibility is to form the largest possible coalition,” Lapid pledged during his party’s celebration.

Lapid’s vow was echoed by the prime minister-designate. “We must forge the largest possible coalition and, I am in the process of fulfilling this mission,” promised Netanyahu barely two hours after the exit polls.

“It won’t be easy,” predicts Uri Levy, news editor at Israel’s public television. “He’ll have to compromise, change his way of thinking.” Netanyahu is known to be adverse to change.

Election Day seemed auspicious. Flanked by his two sons and his wife, the incumbent Netanyahu was one of the first Israelis to cast a ballot for his Likud-Beitenu list of candidates.

Since he had called for early elections, Israelis were made to believe by opinion polls what Netanyahu himself was made to believe – his re-election for another term at the helm was a certainty.

“He’s obviously not very happy with what happened,” is Levy’s understatement. “He expected a lot more mandates.”

The politically savvy Netanyahu made a beginner’s mistake.

First, by merging his right-wing Likud list with the more right-wing Israel-Beitenu party, he alienated supporters who dislike either one of the two parties.

Then, he harassed the further to-the-right Naphtali Bennett because polls, which he’s known to check compulsively, predicted that Bennett’s Jewish Home party which caters to settlers’ interests would enjoy unprecedented support – though it didn’t. There too the opinion polls were misleading.

Albeit a bright and sunny Election Day, it’s neither a bright future nor a sunny political horizon which got Netanyahu re-elected, but fear – fear of a third Palestinian Intifadah uprising; fear of fallouts from the bloody civil war raging in neighbouring Syria; fear of Iran’s nuclear programme.

Netanyahu is adept at playing those fears. Hence, his opening remarks at the start of the last cabinet meeting two days before Election Day. “The problem in the Middle East is Iran’s attempt to build nuclear weapons, and the chemical weapons in Syria,” he warned.

He added: “History won’t forgive those who allow Iran to arm itself with nuclear weapons. This was and remains the main mission facing not only myself and Israel, but the entire world.”

His campaign was as dull and dormant as the political status quo he has prudently maintained during his first term.

Except for a ten-month freeze on settlement construction and one brief encounter with Palestinian Authority President Mahmoud Abbas in 2010, he has made no peace moves towards the Palestinians.

He launched a brief military operation on Hamas in the Gaza Strip in November and suffered a stinging defeat at the UN ten days later when the General Assembly voted by overwhelming majority to upgrade Palestine to “non-member observer state”.

He sounded the alarm against Iran’s nuclear programme; threatened unilateral military action; yet refrained from committing himself to both his own red line and deadline.

Making national security and national strength the twin themes of his campaign, Netanyahu underestimated the lack of social security felt by a middle class weakened and pressured by his ultra-liberal economic policy.

Netanyahu ignored the fear shared by a majority of Israelis of a socio-economic downfall, an anxiety so apparent one-and-a-half years ago when half a million demonstrators descended to the street and demanded social justice.

“The election results provide an opportunity for change for the benefits of all our citizens,” now reluctantly retorts the champion of unbridled liberalism.

Netanyahu won and lost the elections at the same time. He won because Israelis fear change; he almost lost because they strongly feel for change. (END)