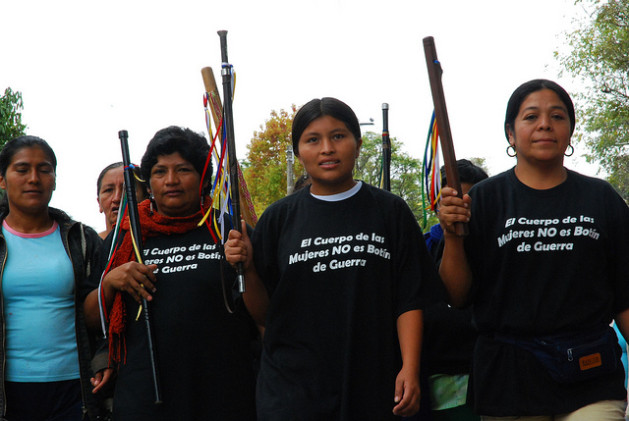 Women’s bodies are not spoils of war, say the women of Colombia. Credit: Intermón Oxfam

UNITED NATIONS, Mar 11 2013 (IPS) - When the largest single gathering of women met at the United Nations in February last year, the adoption of a future plan of action was undermined by rigidly conservative governments opposed to women’s reproductive rights – largely misinterpreted as a right to abortion.

As a result, the 45-member U.N. Commission on the Status of Women (CSW), the principal policy-making body dedicated to the advancement of women, concluded its two-week-long meeting last year without an “outcome document” or “agreed conclusions”.

We want this relationship between violence against women and peace and security reflected in global and national policies.

This year, another political storm has been brewing as some member states are determined to delete all references in the outcome document to two landmark Security Council resolutions (1325 and 1820) on the importance of women, peace and security in relation to militarism and gender violence.

According to an Asian diplomat, countries such as Canada, Switzerland and members of the European Union (EU) have been supportive of the need to underscore the importance of 1325 and 1820.

But Russia, with its own undeclared agenda, has opposed the linkages.

Interestingly, the diplomat said, the African group wants a reference only to “relevant Security Council resolutions” but suggests the deletion of actual references to 1325 and 1820, (plus several other resolutions on women, peace and security), and has also refused to accept the recognition of the linkages between gender equality, peace, security and development.

The use of the word “relevant” leaves it up to member states to determine which of the resolutions are relevant or not, he added.

This year’s meeting, which began Mar. 4 and scheduled to conclude Mar. 15, is being attended by over 1,500 women delegates.

Mavic Cabrera-Balleza, international coordinator for the Global Network of Women Peacebuilders (GNWP), a programme partner of the International Civil Society Action Network, told IPS her network of organisations is underscoring the connection between violence against women, and peace and security.

“We believe there cannot be sustainable peace if violence against women persists,” she emphasised.

In the same way, she pointed out, violence against women prevents women from fully participating in peace processes.

“We want to see this connection emphasised in the agreed conclusions, the outcome document of the CSW,” she added.

Cora Weiss, president of the Hague Appeal for Peace and an active participant in the current discussions, described the omission as “an outrage”.

She told IPS, “The problem with this CSW is that it is ignoring both war/militarism and 1325 on the official side.”

And this is happening, she said, while so many side events by civil society and non-governmental organisations (NGO) have women testifying on the role of militarism, war, soldiers and private contractors as the perpetrators of violence in their countries.

Last year, she pointed out, the CSW conclusions were scuttled because of conservative governments that opposed reproductive rights.

“This year we have a chance that an outcome document might get adopted but will be inadequate if it doesn’t see militarism, war, security contractors as responsible for so much violence against women,” said Weiss, who is also president of the International Peace Bureau.

There is a need, she said, for the participation of women at all levels of decision-making, and the full implementation of U.N. Security Resolution (UNSCR) 1325 is absolutely essential as a way to help stem the violence against women.

Cabrera-Balleza told IPS, “We want this relationship between violence against women and peace and security reflected in global and national policies.

“And we want member states to fully implement UNSCR 1325 and 1820 and the other Women, Peace and Security Resolutions and comply with the Convention on the Elimination of All Forms of Discrimination Against Women (CEDAW) and implement national strategies to combat sexual and gender-based violence at the same time – in a holistic manner.”

These are all necessary pieces of the puzzle that should come together, she said.

“In the latest version of the agreed conclusions, some member states have taken in our recommendations and have proposed language to integrate UNSCR 1325 and 1820 and the women and peace security agenda as a reaffirmation of their commitment to eliminate violence against women.”

However, some member states are opposed to the idea and want references to UNSCR 1325 and 1820 deleted, said Cabrera-Balleza.

This is very problematic because it reinforces the already very compartmentalised approach and lack of coherence in the work of the United Nations, she added.

The key provisions of UNSCR 1325 include specific protection needs of women and girls in military conflicts; increased participation and representation of women at all levels of decision making; and gender perspective in post-conflict processes, including U.N. programming, reporting and in Security Council missions, as well as gender perspective and training in U.N. peacekeeping operations.