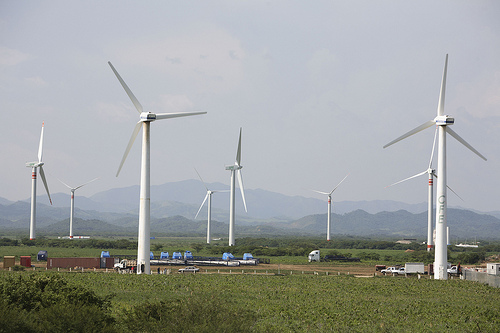 Green taxes could finance wind parks, like this one in the southern state of Oaxaca. Credit: Mauricio Ramos /IPS

MEXICO CITY, Mar 14 2013 (IPS) - As the Mexican government prepares a broad tax reform bill, experts and activists see it as an opportunity to include new “green taxes” aimed at raising funds for curbing pollution.

Fuel consumption, the manufacturing of automobiles and fertiliser, and mining could be among the areas subject to new environmental taxes under the reform.

“Taxes are a means of getting prices of merchandise to reflect the real economic, environmental and social value of resources. They seek to modify conditions of consumption, reduce emissions, and improve the environment,” academic Karina Caballero told IPS.

“Gradually increasing taxes can be applied,” said Caballero, a professor in the economics department of the Autonomous National University of Mexico (UNAM).

Caballero studied fuel taxes in this country and found that the more income people have, the more gasoline they use, in general. Moreover, she reported that price hikes do not significantly dampen demand.

The introduction of so-called green or environmental taxes picked up speed in the 1990s, especially in industrialised nations like Australia, Denmark, the Netherlands, Norway and Sweden, which tax vehicles and energy products that emit carbon dioxide (CO2), produce toxic waste, or have impacts on water sources.

Green taxes are aimed at reducing environmental damage and curtailing the effects of pollution by earmarking the revenue for conservation efforts, more green-friendly consumption, or the generation of more environmentally efficient technologies.

In Latin America, Brazil adopted a tax in 1988 on the circulation of merchandise and inter-state and inter-municipal transportation service and communication providers, which taxes consumption of goods and services. A greater share of the revenue goes to those municipalities and states that do the most to protect the environment.

Costa Rica, for its part, dedicates 33.5 percent of its fuel tax to conservation activities.

On average, the countries of the Organisation for Economic Cooperation and Development (OECD), a group of industrialised nations including Mexico, levy eight environmental taxes.

The OECD reported that the revenue from green taxes represented around seven percent of the total tax revenue of its 34 member countries between 1994 and 2007.

“The reform is a good chance to apply green taxes, which can have positive environmental and social effects,” economist Mauricio González, director of the graduate school of business administration and management at the private Monterrey Institute of Technology and Higher Education, told IPS.

The bill will be negotiated in Congress this year, with the aim of putting it into effect in 2014.

Under the reform, food and medicine would no longer be exempt from the Value Added Tax, which currently stands at 16 percent.

Mexico’s overall taxation rate is 19 percent, one of the lowest in Latin America.

A high-level government source told IPS that there was no specific green tax proposal to add to the reform bill as yet. But the source said new environmentally-related taxes may be included, or existing ones may be raised.

The green taxes that are currently levied do not surpass one percentage point of Mexico’s GDP, according to OECD statistics, while the average in the bloc is seven percentage points.

“In Mexico, environmental fiscal policy is in diapers,” says the study “Public finance and the environment” produced in 2010 by the Centre for Public Finance Studies of the Mexican Congress.

“The possibility of implementing a reform of this kind has not been thoroughly analysed, and the existing taxes appear to be vague when it comes to the environment,” it concludes.

In Mexico there are taxes on new cars, and on the production of diesel, natural gas used in transport and gasoline. But within the OECD, Mexico is the country with the lowest taxes on fuel.

On the other hand, subsidies for gasoline, electricity and household gas exceed 23 billion dollars, according to experts and environmental organisations.

Environmental groups have so far set forth nine specific proposals for new environmental taxes. They also insist that fuel subsidies should be phased out, arguing that they are inequitable, inefficient and environmentally costly.

In 2005, Carlos Muñoz and Sara Ávila of the governmental National Institute of Ecology and Climate Change (INECC) proposed establishing a graduated scale of taxes from zero to 15 percent for pesticides, depending on level of toxicity, or a single 10 percent tax only for the most toxic pesticides.

Their study, “The effects of an environmental tax on pesticides in Mexico”, published in the magazine Gaceta Ecológica, concluded that the chemical industry would not lose revenue and consumers of agricultural products would absorb the price hikes.

Another study, “Agricultural pollution and costs in irrigation district 011, Guanajuato”, led by Rosario Pérez of UNAM’s Economic Research Institute, found that a 100 percent tax on methyl parathion, a highly toxic insecticide, would cut its use in half and reduce the earnings of its producers by less than one percent.

“The costs of water and insecticides represent a small percentage of the total cost, due to subsidies, which stimulate the over-use of these inputs. The cost of polluting and over-exploiting water and the soil is practically zero,” says the study published in the Revista Mexicana de Ciencias Agrícolas (Mexican Journal of Agricultural Sciences) in August 2011.

But business leaders are far from accepting environmental taxes.

“We have to be careful about these issues…they must not affect the country’s competitiveness. Mexico cannot take vanguard positions,” and do so on its own, the chairman of the energy commission of the Confederation of Industrial Chambers, Régulo Salinas, told IPS.

“Taxes can be levied on electricity, gas and water,” said Caballero. “But you have to compensate the social impact, by means of benefits that target the lowest income sectors, like a transport subsidy.”