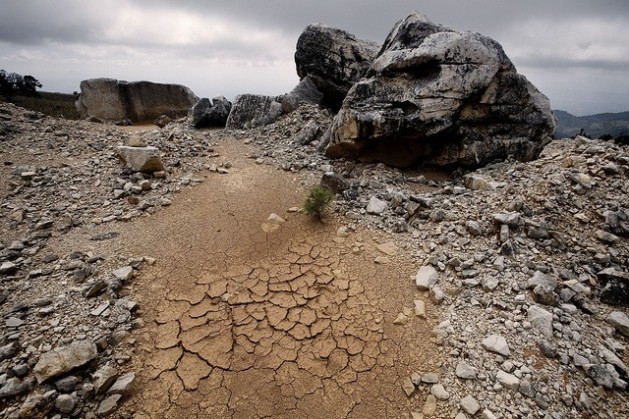 GENEVA, Mar 15 2013 (IPS) - Scientists gathered in Geneva for the first High-level Meeting on National Drought Policy (HMNDP) in over 30 years have identified data collection and sharing as some of the main challenges to effective prevention of drought. Clear goals and strong political will are vital to building policies at the national level, they say.

Jointly organised by the United Nations Convention to Combat Desertification (UNCC), the Food and Agriculture Organisation (FAO) and the World Meteorological Organisation (WMO), the meeting from Mar. 11-15 is an attempt to open an international dialogue on national policies.

Despite obvious differences, particularly between the North and South but also within and between specific countries, some obstacles are the same across all regions, starting with the need to promote better data collection and information dissemination.

As Cesar Morales, coordinator of a project undertaken by the U.N. Economic Commission for Latin America (ECLAC) to estimate the cost of inaction before and during a drought, told IPS on the sideline of the conference, “The problem is not only data collection, but also data sharing.”

He says that in Latin America, but also in the other places, the problem is exacerbated by the fact that some institutions refuse to make information and research freely available to civil society, the public or other organisations.

“Presently we are preparing a report for the government of Costa Rica and the national meteorological organisation wants us to pay for their data,” he lamented, adding that in the scientific community, where everybody is competing for the same limited funds, nobody wants to share their information.

“This is a system that comes from the U.S. Introducing some market mechanisms into scientific research can be good, as long as it doesn’t become extreme,” he stressed.

In response to this problem, Latin American scientists at the conference have proposed a transparency policy on data and the creation of national systems of drought-related information.

In Argentina, the National Council of Scientific and Technical Research (CONICET), the leading national agency for the promotion of science and technology, requires research undertaken using its own resources be offered for free to all users.

Scientists from Latin America also drew attention to the extractive industries, which are not only heavy consumers of water resources, thus aggravating water scarcity and drought, but also contribute to the decline of traditional wisdom on water management.

Experts highlighted the current model of forestry development that is being practiced and promoted throughout the continent — particularly the cutting down of natural forests to make way for monocultures of rapidly-growing water-dependent species like eucalyptus – as an obstacle to drought prevention strategies.

Mining is another major problem in some regions of Peru, Bolivia, Chile and Argentina.

“Original Indian communities live in valleys…where they (use) just enough water to produce food. But mining activities in the region aim to capture all the water to make products with higher market value,” Morales told IPS.

The expulsion of indigenous communities from their lands contributes to the loss of traditional knowledge on how to manage water scarcity and mitigate the effects of climate change. The ancient peoples of Peru, for example, used to transport water in special channels designed to avoid losses and they had appropriate agricultural techniques, in harmony with available resources.

For instance, “This year was declared the year of quinoa,” Morales said. “Recently, this plant had almost disappeared, but it has suddenly become very popular for its high quality proteins. It grows almost everywhere and everybody wants to cultivate it since it is a very good business for export.

“But this plant cannot be cultivated alone and extensively. It needs to be grown with other crops to preserve biodiversity and the fertility of soils.” But agribusiness predominantly favours monocrops over holistic, natural farming practices and is a major driver of drought.

Experts at the conference believe that one way of developing a more efficient system for gathering and distributing information is to have a holistic and multi-sectorial approach to drought.

“Drought is a developmental, not only an environmental, issue. Investing in drought planning can increase gross domestic product (GDP),” Bai-Maas Taal, executive secretary of the African Minister’s Council on Water, told IPS. “But the problem is that the costs of drought are only ‘guesstimated’. Only the primary impacts are calculated, while the longer term ones on activities like agriculture are neglected.”

According to African scientists at the conference, developing coherent national drought policies does not require each country to reinvent the wheel.

In a continent that has experienced severe droughts — which have gone from being episodic to an almost permanent phenomenon — for decades, every country has some kind of institution, policy, or strategy dealing with the issue.

But capacity building and a strong political commitment are lacking, like almost everywhere in the world.

“(We) need coordinated management of drought,” Taal continued. “In Kenya, it is the office of the Prime Minister that coordinates the meetings on climate — since the initiative comes from the highest office, all ministers do participate.” Having directives come from the highest authority in government also enables faster and more efficient dissemination of information.

This was evidenced in the U.S. during the severe 2011-2012 drought, where damages were limited thanks to the National Integrated Drought Information System’s (NIDIS) early warning system.

Echoing the theme of HMNDP – the development of full-fledged drought policies at the national level — Adrian Trotman from the Caribbean Institute for Meteorology and Hydrology, pointed out, “…A drought policy maintains a focus on the goals. Players can change, but goals remain and you can establish and maintain partnerships and coordinate actions while making sure that the policy remains flexible.”

Among the many plans and proposals on the table was one by African scientists to develop insurance schemes so farmers can be compensated in times of drought, and another by scientists from the Southwest Pacific region to explore the establishment of drought “safety nets” to assist specific communities, as was done in Australia, the only country with a comprehensive national drought policy that has enabled it to remove drought as a category from natural disaster emergency relief.