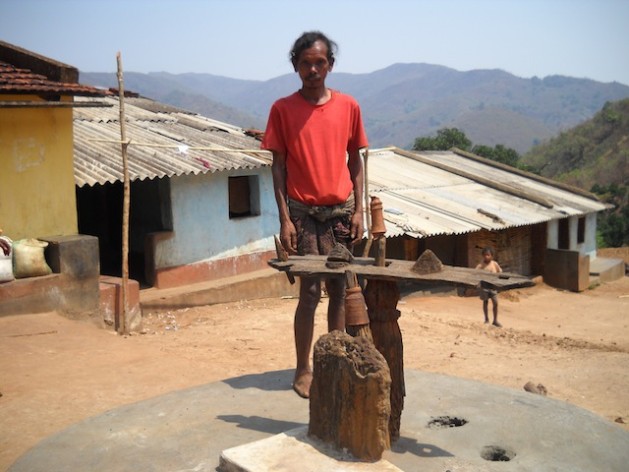 A member of the Dongria Kondh tribe in eastern India prepares to sacrifice a rooster to ward off drought. Credit: Manipadma Jena/IPS

Over a period of two centuries (between 1801 and 2002), India experienced 42 severe droughts, according to the Indian Space Research Organisation. One of these, in 1979, cut food grain production by 20 percent; another, in 1987, damaged 58.6 million hectares of cultivated land, affecting 285 million people.

In the last decade (2002-2012) three major droughts hit the country, and in 2012 drought shaved off half a percentage point from the Asian giant’s gross domestic product (GDP), according to a 2013 World Bank report.

Seventy percent of Indians live in rural areas, while 58 percent rely solely on agriculture for a living. The 355 million people who fall below the 1.25-dollars-a-day poverty line depend primarily on rain-fed agriculture for subsistence.

Back to the Basics

Subsistence tribal farmers who make up almost a quarter of the total population in Odisha – which has gained notoriety as India’s “starvation zone” -- are increasingly returning to traditional farming practices after disastrous encounters with high-yielding commercial paddy seeds and chemical fertiliser in drought-prone areas.

Agricultural methods such as multi-cropping, organic soil additives and the use of traditional seeds, buffered by grain banks managed by women’s collectives, are seeing farmers through the four leanest months of the year, and strengthening food sovereignty.

Not content with simply following ancestral agro-wisdom, farmers are adapting to changing climate patterns. Harish Siraka, of the Kondh tribe in southern Odisha’s Rayagada district, for example, has spent the last two years cultivating not three but fourteen varieties of crops in his half-hectare plot.

In Odisha’s Koraput district in India’s Eastern Ghats, the tribal communities practice landscape farming, with hardy crops on the highlands and more water-demanding crops on the midlands and lowlands.

“Drought in the drylands is a different crisis than what occurs in irrigated regions,” Debjeet Sarangi of the Odisha-based NGO Living Farms told IPS.

“For regions that experience a recurrent climate-induced monsoon deficit, the agricultural budget must incorporate a disaster preparedness mechanism encouraging (the deployment) of less water intensive crops like millets and sorghums,” he added.

This week, participants in the United Nations’ High-Level Meeting on National Drought Policy (HMNDP) have descended on Geneva, where they will debate preparedness and mitigation strategies from Mar. 11-15.

As a member of HMNDP’s International Organising Committee, India is under pressure to tackle a range of issues that exacerbate the impact on drought, particularly on rural populations.

Despite 2012 being a semi-drought year, “India had 66 million tonnes of food stocks at the start of 2013,” Devinder Sharma, a well-known food and trade policy analyst noted in The Times of India.

Over the past 12 years, food production growth has averaged about three percent, higher than India’s annual population growth of 1.5 percent over the last 10 years. Despite experiencing slower agricultural growth than some other Asian countries, India is no longer at risk of drought-related famines, as it was some 20 years ago.

“Evidence suggests that the Indian economy today is ‘drought resilient’ but not ‘drought proof’, the distinction being that once drought proof there is no negative impact on the economy, but in a drought-resilient country, there is a negative but manageable impact,” Jatin Singh of SkyMet Weather Services, a private weather forecasting company, told IPS.

According to the ministry of agriculture’s crisis management plan for 2012, “Drought is not a disaster, but a management issue”.

This new dynamic is partly the result of drought adaptation measures that have expanded farmers’ traditional focus on the ‘kharif’ (summer crop), which relied on the monsoon rains, to include the ‘rabi’, or the winter crop, as well.

There has also been a step-up in the sector’s gross capital formation (GCF), which includes investment in irrigation infrastructure, land reclamation, afforestation and development of government farms.

But experts say the government will need to do more for the agricultural sector if it wants to prevent incredible hardships for millions of people.

Although agriculture contributed only 14 percent of India’s GDP in the 2011-2012 fiscal year according to the government’s Economic Survey for 2012-203, its importance in maintaining food security during times of drought cannot be underestimated.

Marginal farmers, with land-holdings of up to one hectare, and small farmers who own one to two hectares, form 80 percent of the agricultural workforce and are the most financially indebted group in rural India – 88 percent of West Bengal, 71 percent of Uttar Pradesh and 70 percent of Odisha are in debt, according to the 2003 Situation Assessment Survey of Farmers.

India’s southern coastal state of Andhra Pradesh sees two major droughts every five years and its rain-fed arid regions are the most drought prone regions in India. In addition, the state is home to 82 percent of India’s indebted farmer households, according to national agriculture statistics for 2012-2013.

In the eastern Indian state of Odisha, 65 percent of farmland is dependent on rain-fed irrigation. Bolangir and Nabrangpur districts are two of the most drought-prone in the country.

If drought is detected early enough, farmers have a slim chance of falling back on farm-saved seeds, or on the rare provision of government-sponsored seeds, to sow their land a second time.

The more likely outcome of weak monsoon rains, however, is that “30 percent of farmland will be left fallow and farmers, with their families, migrate en masse in search of work”, Suresh Chandra Bisoyi of the Bhubaneswar-based Regional Centre for Development Cooperation told IPS.

Farm insurance and credit is assuming greater importance, but much needs to be fine-tuned, admit federal and state government officials.

“While agricultural production has grown so have costs. Today the cost of cultivating (sowing to harvesting) a single hectare of…rain-fed land is 30,000 rupees (600 dollars) and up to 42,000 rupees (840 dollars) for a hectare of irrigated land,” Saroj Mohanty, core committee member of the Farmers’ Federation of Western Odisha, which is currently in negotiations with the Odisha state government over fair farm insurance, told IPS.

“What is still more unjust is that a farmer may own more farmland but compensation is paid for no more than a hectare per farmer. And while the individual farmer pays the insurance premium, the compensation is calculated on total land damaged in a panchayat  (an administrative union of villages),” Mohanty added.

What is worse, he says, is that tenant farmers are not eligible for insurance compensation because land tenancy is not legal in Odisha. Thus most landless rural peasants and marginal farmers are the worst hit by drought.

“Small farmers in India get less than six percent of farm credit,” according to Sharma. “No wonder farmer suicides show no signs of ending.”

A World Bank report bolstered these claims with the finding that “Rural poor have little access to credit. While India has a wide network of rural finance institutions, many of the rural poor remain excluded, due to inefficiencies in the formal finance institutions, the weak regulatory framework, high transaction costs, and risks associated with lending to agriculture.”

Adusumilli believes that the current national policy is based more on “managing media during periods of drought…and the delivery of the largesse”, than on concrete prevention and mitigation plans.