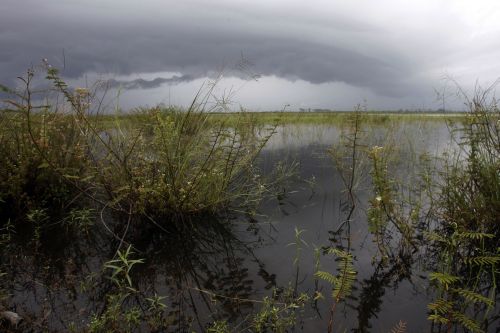 HAVANA, Apr 11 2013 (IPS) - Botanist Ramona Oviedo has spent decades combing the countryside in Cuba to study and curb the spread of invasive plant species, a serious problem that has been aggravated by climate change.

Global warming “can worsen the impact of invasive plant species, which are more resistant than Cuba’s native flora,” Oviedo, a researcher at the Ecology and Systematics Institute (IES), said in an interview with IPS.

The United Nations Convention on Biological Diversity defines invasive alien species as “animals, plants, fungi and microorganisms entered and established in the environment from outside of their natural habitat (that) reproduce rapidly, out-compete native species for food, water and space, and are one of the main causes of global biodiversity loss.”

These biological invasions are the result of globalisation, which has boosted travel and international trade, and of the intentional introduction of alien species for purposes such as fish farming, the pet trade, horticulture and biological control (as biocontrol agents).

The spread of invasive alien species has become a major driver of species loss, second only to ecosystem degradation.

There are 323 invasive plant species in Cuba that colonise natural and agricultural environments, displace native plants and cause imbalances that are costly for the environment and the economy. And another 232 alien plant species present in the island could potentially be placed in that category.

Local effects of climate change such as rising temperatures and increasingly frequent droughts threaten native vegetation, which could be replaced by highly-resistant alien species with a high reproduction rate, Oviedo told IPS. Hurricane-prone areas could face a similar fate.

In the second half of the 20th century, Cuba’s mean annual air temperature rose 0.5 degrees Celsius, according to “The Caribbean and Climate Change. The Costs of Inaction”, a report published in May 2008 by researchers at Tufts University in Boston. Local projections estimate that by 2100 it will have increased by 1.6 to 2.5 degrees.

Seven severe hurricanes hit Cuba between 2001 and 2011. Such a high number of intense hurricanes in one decade had not been registered since 1791. Droughts have intensified and become more frequent, with the most severe drought on record to date lasting from May 2003 to April 2005 and affecting the entire country.

These disturbances associated with global warming occur in ecosystems that have been “weakened, fragmented and altered” by centuries of agricultural development and urbanisation, Oviedo noted. And as more and more native species are affected, the possibilities for the spread of invasive species grow, she said.

Cuba, like many islands, has a large proportion of endemic plant species – that is, plants that are unique to the island, and which must be preserved.

But for an economy such as Cuba’s, managing these invasive species is a challenge, the expert said. Many of these plants grow on arable land, making agriculture impossible, or they block or contaminate waterways.

Sicklebush (Dichrostachys cinerea), or “marabú” as it is known in Cuba, is a tree native to Africa found extensively throughout the island. It started to spread in the late 19th century, after it was brought to the Caribbean region, possibly as an ornamental tree or botanical novelty or in cattle that ingested the seeds and bypassed the mandatory quarantine.

In fact, all of the idle state lands distributed for use among farmers from 2008 to June 2012 (more than 1.5 million hectares) were infested to some extent with marabú trees and weeds. The farmers who were granted usufruct rights over these plots had to clear them with machetes before they could plant crops.

But trees and plants like these are not entirely “undesireable,” Yoan Sarduy, an agriculture ministry delegate stationed in the province of Cienfuegos, 232 kilometres southeast of Havana, argued. Marabú trees, for example, improve soil, and farmers in that province harvest the wood to make furniture and charcoal, she told IPS.

Invasive plant species are a problem throughout Latin America. Chile reports 1,500 alien species, Costa Rica 238, and Mexico 665, while Guatemala and the Dominican Republic have 595 and 59 respectively, according to different sources.

The IES recommends eliminating invasive populations by rooting out the plants by hand or through mechanical means and taking precautions to prevent them from spreading again. It is an arduous method, but safer and more cost-efficient than applying herbicides or introducing biocontrol agents.

It also recommends making use of the plants to produce organic fertiliser or animal feed, generate biogas, make crafts or create water gardens.

As it is impossible to eliminate them completely, “people should learn to identify these species and use them to their benefit,” Dalia Salabarría, a researcher with the Cuban Environmental Agency, told IPS in a telephone interview.

Salabarría heads up an effort to create a nationwide information system to manage 13 plant species and 14 animal species, monitor their impact and implement early warning and detection measures. The programme will be implemented with U.N. funding through 2017.

The experts say local residents must play a leading role in the detection, control and management of invasive plant species.

The IES is carrying out an initiative called Environmental Pioneers, aimed at educating children from around downtown Havana on these and other issues.

More than 1,500 children have taken part in the programme since 1998. Talía Rodríguez, now 13, learned how to map out the natural resources found in her area. “We also know how to identify certain invasive plants so that we can alert adults if we see them when we’re exploring,” she said.