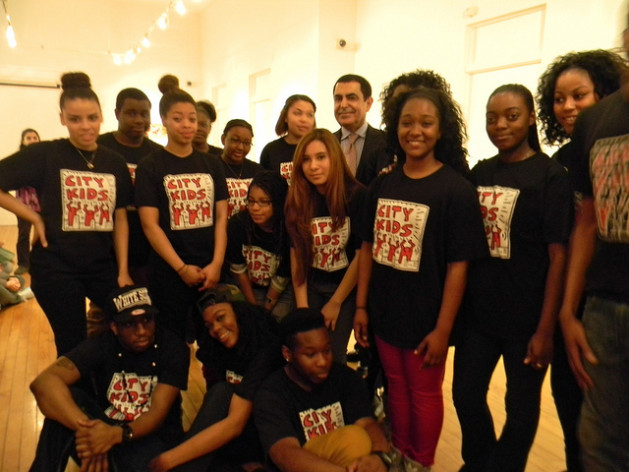 NEW YORK, Apr 13 2013 (IPS) - Today’s youth are hardly passive consumers of content – they create it, endlessly updating via social media and spreading information faster than one can say “go”.

This weekend at New York’s Columbia University, the United Nations Alliance of Civilisations (UNAOC) teamed up with Columbia’s Teachers College for a symposium titled “Conversations Across Cultures: Youth Media Visions“, exploring how young people from around the globe view diversity, migration and social inclusion, via video production.

Inaugurating the symposium, His Excellency Mr. Nassir Abdulaziz Al-Nasser of Qatar, a former president of the U.N. General Assembly and U.N. High Representative for the Alliance of Civilisations, emphasised the deep investment of the UNAOC in the development of young people.

“The UNAOC is committed to facilitating the participation of youth with their visions and opinions of the political process. Several of the UNAOC initiatives channel this commitment,” he said.

“The UNAOC is also committed to supporting the distribution of outreach of new media, and of media messages where youth represent themselves.”

And that seems to be the precise reason for giving young people a mic, a video camera and access to the Internet. Though mainstream media may not always be keen to allow the voices of the young for fear of unorthodox opinions, Youth Media Visions pushes young people to the frontline, facilitating all aspects of education and production under the guidance of experienced media professionals.

“It’s very appropriate to welcome a programme that’s of enormous impact because this is a way that youth can speak and make a difference, and communicate across cultures and help people understand each other.” Dr. Susan Furhman, president of Teachers College, told a packed room at the Macy’s Gallery.

The symposium, which features various digital aspects including film, workshops and video production, is an avenue of dialog that brings educators and youth together to discuss mediums of change.

How do you get young people to voice their opinions on the matters that truly concern them? Well, you start by giving them a video camera.

In 46 short films made by youth all over the world, subjects such as migration, education, bullying, unemployment and poverty are covered with such unflinching clarity and honesty, it’s almost difficult to watch.

In a short video entitled “Living in Limbo: Youth Out of Work and Out of School”, a group of teenagers shoot a day in the life of a young New York mother as she struggles to navigate the perils of job hunting whilst dealing with two young children and bouts of depression. The film works to shed light on the United States’ disconnected youth, a phenomenon that has left many out of school.

Build it and they will come

Regardless of where a child grows up and what resources are available to them, technology – once introduced – becomes a learning tool unlike any other.

“Technology promotes this sort of playfulness, you get to know things through a sort of game,” Laia Sole, an artist and arts educator who curated the project, told IPS.

Youth Media Visions embraces this aspect by engaging its participants in the conversations surrounding the introduction of media and technology to remote villages and cultural settings usually isolated from technology.

“Children every day act in a very similar manner. The introduction of media and technology into a classroom is something that we can see all over the world. It’s changed the way we approach technology and how we build it. It is something that promotes interaction and it’s more based on the senses; it’s more tactile and visual and it’s something that humans, particularly children, relate to,” Sole told IPS.

The symposium, which runs Apr. 12- 14, also features eight non-profit organisations from all over the world whose main goal is to empower young people by using media.

CHINH, Global Action Project, Cinema en Curs, One Minutes Jr., Educational Video Center, Plural +, Fundacion Kine and Wapikono Mobile are all organisations that will participate in the three-day event which encourages visitors to take active digital roles in the discussion of formal and informal education.

“One of the things that became relevant to me while working on this project was learning from these organisations that we have here,” Sole added. “They are mobile, they are flexible, they can work whether in formal or informal settings, which means that they can reach communities which otherwise could not be reached.

“My main goal would be that we see how these different organisations operate, in order to see what are the advantages of working with media in any educational setting whether it’s formal or informal,” she concluded.

Youth Media Visions will be on display at the Macy Gallery Apr. 12 through 19.