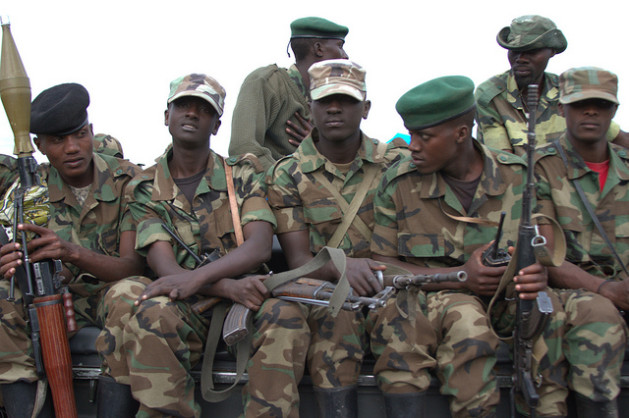 M23 have conducted a number of protests against U.N. Security Council Resolution 2098, which enables an offensive combat force in the eastern DRC. Credit: William Lloyd-George/IPS

GOMA, DR Congo , Apr 24 2013 (IPS) - When M23 rebels tried twice to arrange a protest march against a United Nations resolution to deploy an intervention brigade with an offensive mandate to eastern Democratic Republic of Congo, they had to postpone it because the local population would not participate.

In Kibumba, 25 kilometres north of the provincial capital Goma, not only had the population refused to demonstrate – they had also fled town.

The rebels rescheduled the Apr. 10 march for Apr. 15. But when that day rolled around, the local residents, and especially the young people, had not returned – and once again the protest had to be postponed.

But according to Janvier Nkinamubanzi, a political analyst at the University of Goma, it was absurd for the M23 to expect the local population to march against the U.N. force. The M23 are named after a peace agreement in Mar. 23, 2009 between leaders of the former rebel group, the National Congress for the Defence of the People (CNDCP), and the Congolese government. The M23 is a breakaway from the CNDCP, and its members are mostly from the Congolese Tutsi community.

”The inhabitants of Kibumba or regions occupied by M23, even those in Goma, have the impression of being victims of a foreign occupation,” Nkinamubanzi told IPS. The U.N. has said that both Rwanda and Uganda supported M23 rebels in their capture of Goma in December 2012. But after a weeklong occupation of the town, M23 withdrew.

According to the U.N. Office for the Coordination of Humanitarian Affairs, since the beginning of the M23 rebellion in April 2012, more than half a million people have been driven from their homes in North Kivu province in eastern DRC.

”Asking them to protest against a brigade that comes to liberate them from this situation is a double humiliation, as the national army is unable to protect them,” he added.

M23 have conducted a number of protests against U.N. Security Council Resolution 2098, which enables an offensive combat force in the eastern DRC. This includes forced protest marches, rallies, and a five-day blockade of 11 vehicles belonging to the U.N. Organization Stabilization Mission in the DRC (MONUSCO) in Rutshuru, north of Goma.

“Our men will not hesitate to retaliate if they are shot at. The blockade of U.N. vehicles is a strong message of how serious we are,” Lieutenant-Colonel Vianney Kazarama, the military spokesperson for M23, told IPS.

Congolese Foreign Affairs Minister Raymond Tshibanda told a press conference on Apr. 1 that the only future for M23 was to disband as an armed movement. If it failed to do so, the intervention brigade would step in and destroy it, he said.

“The government pretends to speak to M23 while in reality it wants to crush the rebels at the earliest opportunity,” Godefroid Kä Mana, the chair of the cross-cultural Pole Institute, told IPS. The institute works across the Great Lakes region.

While M23 were protesting against the U.N. resolution, local leaders, including village chiefs in Masisi, east of Goma, were calling for the Congolese government to integrate soldiers from the Alliance of Patriots for a Free and Sovereign Congo (APCLS) into the Congolese armed forces.

Bahati Kahembe, one of the four traditional leaders in the North Kivu provincial assembly, recognised that both the rebels and army were responsible for human rights violations in the east of the country. However, he told IPS “the APCLS is less violent towards the population than other forces.”

The APCLS is one of the most organised armed groups in the region. Self-proclaimed “General” Janvier Karairi created it in protest against the Mar. 23, 2009 agreement.

According to MONUSCO, there are between 500 and 1,000 APCLS combatants, who mostly belong to the Hunde ethnic group. They specifically target Tutsis, sometimes in collaboration with Rwandese Hutus from the Democratic Forces for the Liberation of Rwanda, who have been refugees in eastern DRC since the 1994 genocide in Rwanda.

The APCLS combatants have also provided support to the Congolese armed forces against the CNDP, and now against the M23, which broke away from the latter party. “We are only defending our land against the invaders,” Karairi told IPS.

But the governor of North Kivu, Julien Paluku, retorted: “There are no good or bad rebels.”