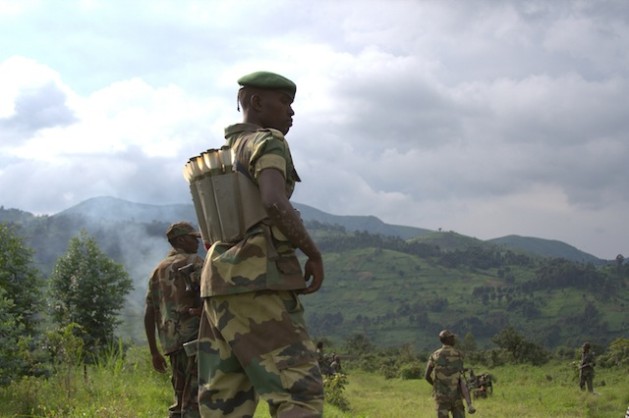 The M23 rebels are among the other rebel groups and Congolese army who have been accused of extorting money from locals to pay their soldiers. Credit: William Lloyd-George/IPS

GOMA , Mar 15 2013 (IPS) - On the way to his fields, Denise Mambo, a resident of Kitshanga, North Kivu in eastern Democratic Republic of the Congo, stops at a rope laid across his path.

“No one is allowed to go past this rope without paying the ‘lala salama’,” a Congolese army (FARDC) sergeant known only by the nickname Django tells IPS.

The “lala salama”, Swahili for “sleep in peace”, is an illegal tax often imposed by the army and rebels in the eastern DRC battlegrounds of North and South Kivu, Maniema, Katanga and Eastern provinces — and particularly in the Ituri region in the northeast.

Initially, “lala salama” was the name of a radio programme broadcast by Kisangani-based Radio Liberté, in northeastern DRC, in 2000. At the time, the programme was run by an officer belonging to a Congolese political grouping allied to Uganda, which accused Rwanda and its allies within the DRC of causing the country’s misfortunes.

Now “lala salama” is more about money than ideology.

Each person on their way to harvest their fields must pay a tax of one dollar or an equivalent of two to three kilogrammes of harvested crops to the men posted at the informal checkpoints. This illegal tax is sometimes called a “security contribution.”

“Sometimes the army and the militia will start fighting just to control a market or a path leading to the fields,” Jean Ngoa, the traditional leader for Kitshanga, North Kivu, told IPS.

The armed groups have also levied a tax parallel to the local authority taxes in market places. The tax ranges from 20 cents to 10 dollars, depending on the quantity of a vendor’s merchandise. This money is payable on market days, usually twice a week, and mirrors the rates of local authorities, who also collect them at similar times.

Ever since the failed integration of former rebels into the Congolese army in 2009, which led to the M23 rebellion or army mutiny in April 2012, the civilian population has become one of the main sources of income to feed the FARDC, armed rebel groups, and Rwandese militia such as the Democratic Forces for the Liberation of Rwanda.

Today, all five provinces of eastern DRC abound with militia, and thousands of civilians have been victims of looting, rape and murder, according to Juvenal Munubo, a parliamentarian for Walikale, North Kivu, and a member of the National Assembly’s Committee for Defence and Security.

“But civilians are also subjected to unbearable financial exploitation,” he told IPS.

General François Olenga was appointed chief-of-staff of the FARDC in November 2012, following accusations in a United Nations report that his predecessor, General Gabriel Amisi, was selling arms to the rebels. Olenga acknowledged the inefficiency of the army and tried to reassure his troops. “I will personally make sure that every soldier receives his pay,” he promised at the time.

Although army chiefs say the average salary of a soldier increased from 10 to 60 dollars a month between 2006 and 2013, soldiers say their pay is inadequate and irregular. Civilians have been the easiest prey for racketeering.

“If we are lucky enough to receive money, we get 60,000 dollars to pay one thousand men, including officers,” Captain George Sakombi of the 810th regiment in Masisi, North Kivu told IPS.

“We were in an army with no pay,” Lieutenant-Colonel Vianney Kazarama, the spokesperson for the M23 rebels who took control of Goma during November 2012, told IPS. The M23 rebels are from the former National Congress for the Defence of the People, which signed a peace accord with the Congolese government in March 2003.

Speaking on condition of anonymity, a teacher from the market town of Kashuga, North Kivu told IPS that his village was attacked 12 times between April and July 2012 by the Congolese armed forces, the rebel Alliance of Patriots for a Free and Sovereign Congo, and the M26 group. The latter is a new rebel group, which is demanding the full implementation of the March 2009 peace accord between the government and the Congolese Patriotic Resistance, which is now a political party.

“When they took over Kashuga, the M26 forced every person over 13 years to pay 1,200 Congolese francs (just over a dollar),” he said. The tax is called “rengera buzima”, which means “protect life” in Kinyarwanda, the local language.

Unlike the “lala salama” where no one asks for proof of payment, “the M26 militia go through the IDP (internally displaced persons) camps, schools and churches to force everyone to show their ‘rengera buzima’ receipts,” the teacher said.