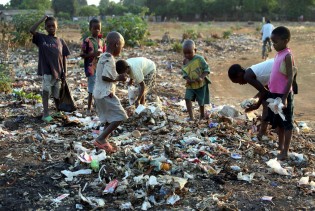 By Lisa Vives
Journalists, activists, hip hop artists and a United States diplomat were rounded up by police at a pro-democracy event on Sunday in Kinshasa in the Democratic Republic of the Congo, sponsored in part by the U.S. government. Security forces charged them with threatening stability, according to a government spokesperson.

By Taylor Toeka Kakala
Standing behind her market stall in Masisu, in the Democratic Republic of Congo (DRC), which overflows with cabbages, carrots and onions, Marceline Dusabe does not fit the traditional profile of an internally displaced person. She, unlike many others displaced by the internal conflict in North Kivu, is not in need of food aid.

By Emmanuel Chaco
Despite the health risks, officials say hundreds of families are living in a cemetery in the Congolese capital, Kinshasa. Municipal authorities seem powerless to act.

By Taylor Toeka Kakala
Dairy cattle are again grazing on the rolling green hills of North Kivu province, in the eastern Democratic Republic of Congo. Twenty years ago, an explosion of ethnic violence tore through this region, and the restoration of the Lushebere farm can be seen as both a sign and a guarantee of a fragile peace.

Students Torn Between School and Work in DR Congo

By Anselme Nkinsi
Hanging from the door of a mini-bus taxi as it jerks and jinks through traffic, 16-year-old Gires Manoka calls out the van's destination to potential passengers as it crosses Kinshasa, the capital of the Democratic Republic of Congo.

By Donat Muamba
Despite the desperate lack of access to water for domestic use in Mwene Ditu, in the central Democratic Republic of Congo, Dieudonné Ilunga spent a good part of July blocking up residents' wells.

By Baudry Aluma
Plant diseases affecting bananas and cassava are gaining ground in two provinces in the eastern part of the Democratic Republic of Congo, according to South Kivu's provincial minister for agriculture, Gisèle Batembo.