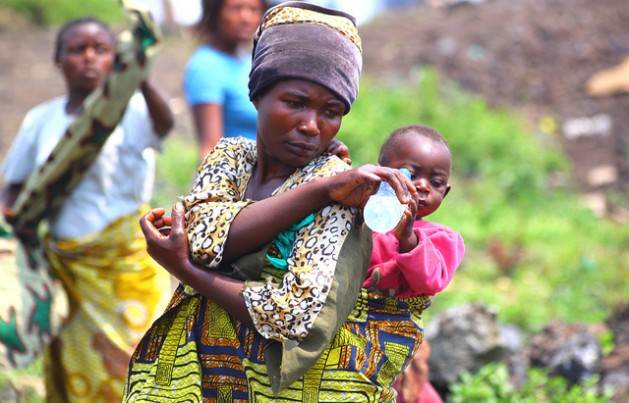 A woman gives water to her young daughter in Mugunga I camp near the city of Goma, eastern Democratic Republic of Congo. Credit: Eddy Mbuyi-Oxfam International/CC-BY-2.0

GOMA, DR Congo, Feb 21 2013 (IPS) - Standing behind her market stall in Masisu, in the Democratic Republic of Congo (DRC), which overflows with cabbages, carrots and onions, Marceline Dusabe does not fit the traditional profile of an internally displaced person. She, unlike many others displaced by the internal conflict in North Kivu, is not in need of food aid.

In fact, thanks to the money that she and her husband both earn from selling the produce they grow, they are even able to live in the privacy of their own home – progress that Dusabe’s husband, Jules Birigimana, is particularly proud of.

“As soon as I was able to provide enough food for the family, I asked my hosts for permission to build my own hut on their land. I was able to do this from the money earned from my food garden,” Birigimana told IPS.

The couple is part of an estimated 910,000 internally displaced persons (IDPs) across North Kivu, according to the United Nations, 150,000 of whom were displaced late last year during the heavy fighting between government forces and the rebel group M-23.

While many still have limited access to basic food and services, some 30,000 IDPs in Masisu have been able to provide for themselves thanks to a farming project called the Food Security Support Project, launched in July 2012 and run by the NGO Caritas International Belgium.

Back at the Rubaya market, the stalls that surround Dusabe’s are also owned by refugees who have benefitted from the food security project in this town some 60 kilometres to the west of the provincial capital, Goma.

The project, which is financed by the European Union, targets 5,500 IDP households (about 30,000 people) across eight small towns in the Masisu area. Each household is given access to about half a hectare of land to farm.

The refugees grow basic vegetables, like Dusabe does, or they can choose to grow two sorts of staple foods, with a choice of beans, sorghum, maize, and potatoes. In addition, each household is given ploughing implements, nutritional information, and technical support.

The partnership between Caritas, traditional local authorities and landowners was crucial to brokering access to farmland for the refugees. Land, indeed, is hotly disputed here in northern DRC, with 80 percent of the local court cases relating to land ownership, according to the Justice and Peace Commission of the Catholic Diocese of Goma.

The agreements brokered by Caritas are grounded in verbal sharecropping arrangements that allow refugees the use of parcels of land in return for part of the harvest.

The refugees’ first harvest was in November 2012. On average each household produced 200 killogrammes (kgs) of onions, 120 kgs of cabbage and 20 kgs of carrots.

“Since their first harvest, the participants in the project have not only increased overall food supplies, but more importantly have improved the quality and quantity of their own food intake,” George Mugabo, a nutritionist at the Rubaya health centre, told IPS.

According to a survey carried out by Caritas in December, this first harvest helped reduce the number of vulnerable people amongst the 5,550 households from 51 percent to 38 percent in five months. “The survey forecast that by November 2013, the number of vulnerable people would be down to 25 percent,” Jean-Claude Mubenga, an agronomist at the food security project, told IPS.

The project has proved successful in part because the market vegetables can be harvested in a relatively short time. As conflict in the area has reduced the supply of produce, prices have also been more competitive.

With M23 rebels occupying Kibumba – a region 25 kilometres north of Goma, which used to be the major market supplier – the harvests from Rubaya, for the time being, seem to be offsetting the fall in supplies.

“It is still a temporary situation,” as Goma resident Nafisa Fatuma pointed out to IPS. But Albert Ngendo, head of the local administration in Rubaya, has pleased with the project’s results so far. “The resettled families no longer have to worry about access to relief aid. This is the most important issue for me,” he told IPS.