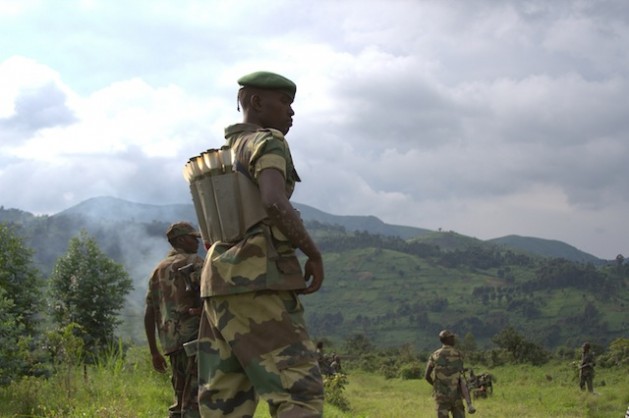 GOMA, DR Congo, Dec 1 2012 (IPS) - Lined up along a dirt path that meanders its way up into the lush war-torn mountains surrounding the small town of Sake, in eastern Democratic Republic of Congo, hundreds of young rebel soldiers sat on the road banks in the baking sun.

As villagers causally walked past, the battle-hardened rebels clutched their weapons. Some held machine-guns, others grenade launchers, a few even had spears, symbolic of their warrior like reputation. Their tired faces and faded fatigues served as evidence of the gruelling seven-month insurgency they had waged against the Congolese government since April this year.

The sound of car engines in the distant brought all the men abruptly to their feet. A four-car convoy zoomed past, each vehicle packed with heavily armed rebels. General Mekenga, the leader of M23, stood out. “We are going to withdraw within the next 48 hours,” he announced. “We will leave Goma at 10am on Saturday.” Goma, 25 kilometres away, is the second-largest city in the DRC, and since Nov. 20 has been held by the rebels.

Despite the rebel leader’s assurances of a swift departure, which was agreed with regional leaders in Kampala, Uganda, many are concerned the withdrawal will not go as smoothly as hoped.

The United Nations Organization Stabilization Mission in the DRC, MONUSCO, has a store at the airport full of weapons and ammunition left by the FARDC, the acronym for the Congolese army, which the U.N. agency plans to return to them. This has infuriated the M23 leadership, who want to take the arsenal with them. 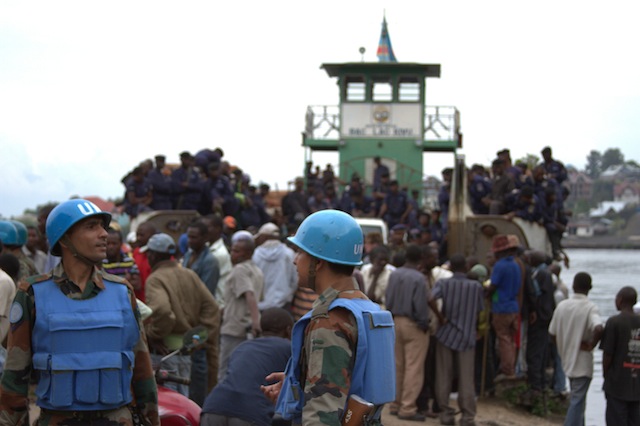 Government police arrive on a boat at the Goma port in eastern DRC as U.N. peacekeepers watch on. Credit: William Lloyd-George/IPS

However just before 11am on Saturday Dec. 1, trucks packed with M23 rebels drove out of Goma.

Military hardware has been seen being transported to their headquarters in Runshura north of Goma. Five trucks packed with countless weapons were parked outside one of the M23 headquarters in Goma, the former FARDC headquarters. On Friday, hundreds of government police were allowed to arrive at the city’s port and enter to the city to provide security during the handover period.

The withdrawal marked the end of over a weeklong occupancy of Goma. The M23, named after a peace agreement in Mar. 23, 2009 between leaders of a former rebel group, the National Congress for the Defence of the People (CNDP), started their recent insurgency in April this year. The rebel leaders said the government did not stick to the agreements made and claim to fight against the corruption and bad governance of the Congolese government.

The M23’s claims have been met with scepticism by many. Residents of Goma told IPS that they believed the main driving force behind the recent rebellion was Rwanda. The same allegations have been made by the U.N., which said that the government in Kigali is supporting them financially, logistically and with weapons. There have been unconfirmed sightings of Rwanda Defence Forces assisting M23 units on the ground. Rwanda has long desired the resource-rich state of Kivu, which is home to countless gold and coltan mines.

Another theory is that Kigali increased attempts to arrest ICC indited CNDP leader Bosco “Terminator” Ntaganda which led him to desert the Congolese army. While M23 leaders have vehemently denied any involvement with Ntaganda, it is believed that he was the catalyst for the desertion of leaders from the CNDP, and for the M23 subsequently being formed.

Since the M23 took power in Goma, many residents reported feeling an increase in security around town. “Although it was a war zone in the beginning, it definitely felt safer than before M23 began to rule,” Robert Minuni, 32, a local engineer, told IPS. “No one knows what the M23 would have started to do, but just for a few days there was no kidnapping, no looting, no killings.”

Before the M23 took over the city, the rebels and the FARDC were playing dirty tricks, impersonating the other to ruin the other’s public image. A bomb in a market; a grenade thrown into hairdresser; and the kidnapping of a famous musician were a few of the horrors inflicted on the city while the two sides vied for public support, or, to simply discredit the other.

As a result many are fearful of the M23’s departure. Standing on a mountain in Karuba near the frontline, a group of villagers told IPS they did not want M23 to leave.

“I am not sure which group is better but I can say one thing, for the first time in a long time nothing has been stolen from us,” said Nelson, who goes by one name. “We really do not want the M23 to leave.”

All the villagers gathered around nodded their heads in agreement. “We do not want the FARDC here, they only cause problems and rob from the people,” said another villager wishing to remain anonymous.

Not everyone, though, is so supportive of the M23 including soldiers currently in their ranks. Speaking to IPS in Goma, one young soldier who had been working for M23 for a  couple of months said he was not sure they would do much better. “All armed groups are the same in Congo,” he said. “It is just for money; which ever side wins I’ll join, most the groups are like this.”

Local human rights groups have accused the M23 of executions, rapes and harassment for anyone seen to be an enemy of the group. The possibility of a power vacuum has further increased fears. And for the hundreds of thousands of internally displaced persons who have been forced out of their homes by the conflict and forced to languish in terrible conditions the M23 are seen as a root of the problems, not a solution.

“We do not want the rebels, they only cause more problems and grief for us,” said one young man who shared a tiny straw shelter with five children and his wife. “Like everyone here, we just want peace.”