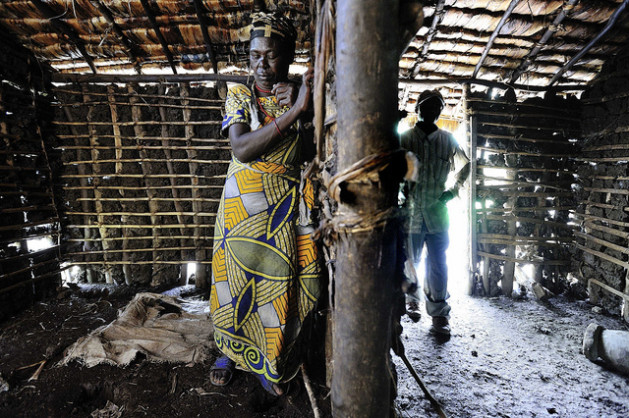 GOMA, DR Congo, Mar 12 2013 (IPS) - A street in Goma’s city centre, the capital of North Kivu in eastern Democratic Republic of the Congo, has been nicknamed “the ward of death” because of the brutal crimes that frequently occur there.

“You will find every kind of person in this part, gays, lesbians, and unfortunately there are brothels where adults are sexually exploiting underage girls,” Major David Bodeli Dombi, the commander of the special police force for the protection of women and children in North Kivu, told IPS.

Over the last two years, an increasing number of brothels have opened in Goma where under-age girls are being sexually exploited and the illegal trade is on the rise.

“These brothels take in many minors, most of whom come from poor and destitute families in North Kivu,” Faustin Wasolela, the head of the child protection programme at the local non-governmental organisation Development Action for the Protection of Women and Children (AIDPROFEN), which helps young victims of sexual exploitation, told IPS.

The region has been in upheaval since April 2012, as fighting between government forces and rebel groups in North Kivu has displaced some 2.2 million people, according to the United Nations Refugee Agency. 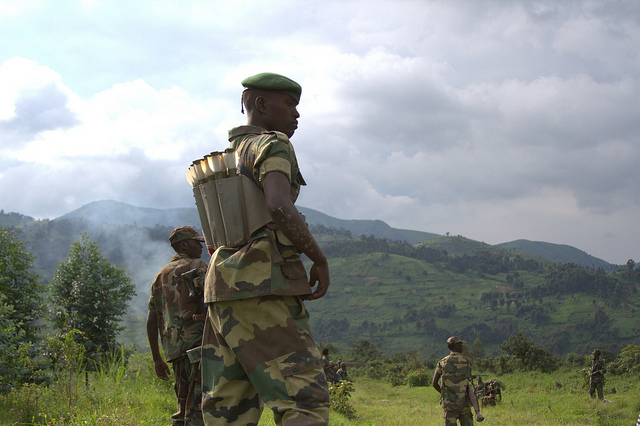 M23 rebels near Sake, Eastern DR Congo. The rebel group withdrew from Goma on Saturday, Dec. 1. Almost 2.2 million people have been affected by the fighting in the country which started in early 2012. Credit: William Lloyd-George/IPS

Other brothels have opened up in several other wards in Goma.

“Nowadays, you will find dozens of these brothels in every ward,” Victorine Muhima, the Kasiska ward chief in Karisimbi municipality, told IPS. Like Wasolela, she also said that harsh living conditions, poverty and incessant conflict were driving the trend.

Sixteen-year-old Masika* works at the Memoire ya Nzambe, a small bar with an area of only four square metres. It is also a brothel. “I work as a waitress during the day and as a prostitute during the night to feed myself and my two-year-old daughter. I don’t know who the father of my child is,” she told IPS.

As a waitress during the day she earns 20 dollars a month. But at night she earns five dollars per client.

“I have been working here since 2010. I come from Béni, where my family lives. My parents are poor and couldn’t send me to school. We could barely get enough to eat. So I decided to come to Goma to earn some money,” Masika said.

The Memoire ya Nzambe bar sells spirits, beer and even marijuana. Rooms for clients are located in the backrooms of the bar. “You can get a girl for one or two dollars,” Emmanuel Bisimwa, a 20-year-old regular, told IPS.

However, bar owners deny sexually exploiting children. “I have five employees, but they are all men. I have no young girls working for me,” Riziki Mufiritsa, the owner of Memoire ya Nzambe, told IPS. But his claim could not be verified.

Like Masika, many other young girls between 13 and 17 are being exploited by older men, and women, in order to make easy money.

The young girls say they have no alternatives to sex work. “I don’t have a choice, I have to buy my own underwear, lotion and even sanitary towels, but there is no other work around,” said 15-year-old Rachel*.

It is a common reason that Idelphonse Birhaheka of the United Nations Children’s Fund in Goma, hears often. “Some girls tell us that they resort to sex work to pay for basics like soap, lotion, or sanitary pads,” she told IPS.

“The armed conflict in eastern DRC has impoverished many families making them unable to care for their children,” Birhaheka added.

Dechine Birindwa is one of those fathers who is finding it difficult to support his family.

“Life has become very difficult. It’s hard to afford food, never mind buy clothes and shoes for my daughters. It’s very tough and they have to fend for themselves,” he told IPS.

Though the special force for the protection of women and children has launched an investigation into the increased sexual exploitation of girls, Dombi said that it was no easy task. “It is difficult to find these brothels, but once we do so, we bring in the owners for questioning and close some brothels after our investigation,” he told IPS.

According to Dombi, the police investigated eight brothel owners in 2012, and closed down five establishments.

“We need cooperation from everyone, from the police who need to put in place deterrents, but also churches, schools, parents and even the media to fight this trend,” Wasolela said.

*Names have been withheld to protect the identity of minors.