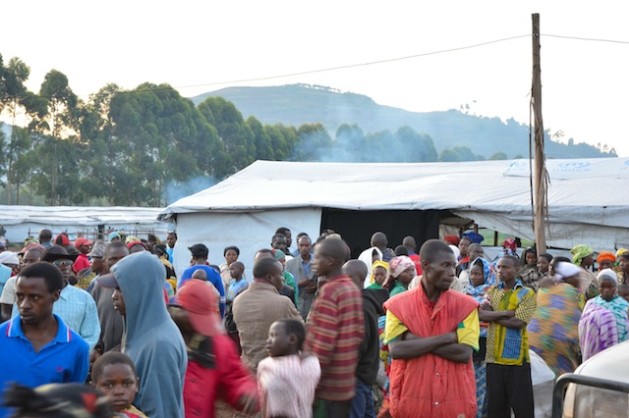 NYAKABANDE, Uganda, Mar 7 2013 (IPS) - As dawn rises over Nyakabande, a village in southwestern Uganda, people line up in front of a reception tent, exhausted and carrying only the few belongings they could bring across the border.

Most of them have walked for days after fleeing the various rebel groups operating in Democratic Republic of Congo’s North Kivu region, crossing the border to the Nyakabande Transit Centre in search of a better life – one without war.

“The conflict in eastern DRC will never end. We’re looking for a better future here in Uganda,” Ndagigimana Ndayambaje told IPS after he, his wife, and their two children just arrived at the centre in this East African nation.

It is not an easy journey for most. According to Dr. Bruce Murray of Medical Teams International (MTI), a Christian global health organisation based at the Nyakabande Transit Centre, women who arrive here “suffer mostly from sexual violence and rape.”

“Children suffer mostly from malnutrition, respiratory and diarrhoeal diseases. The rate of children infected with chicken pox is very high,” he told IPS.

Since April 2012, fighting in the DRC’s North Kivu province has displaced some 2.2 million people in the country and caused almost 70,000 to flee to neighbouring Uganda and Rwanda, according to the United Nations Refugee Agency (UNHCR).

On Tuesday, Mar. 4, the UNHCR appealed for almost 70 million dollars in donations to help these Congolese citizens who have been displaced by fighting between government forces and various rebel groups, but predominantly the Democratic Forces for the Liberation of Rwanda (FDLR), the March 23 Movement (M23) and the Mai-Mai.

During December 2012 and February 2013, the number of new arrivals was quite stable at the camp, with on average of 50 to 100 people arriving per day. But on Mar. 1, between 1 am and 5 am internal fighting within the M23 rebel group resulted in another influx of refugees. The first of about 4,000 refugees arrived at 2 am, crossing over from the nearby border post in Bunagana. The UNHCR, Ugandan Red Cross and MTI struggled to provide assistance to such a large number.

Here, fighting takes place mostly during the night, and refugees arrive at the Nyakabande camp in the morning after crossing the Bunagana border post.

A border officer, who referred to himself only as Mr. Patrick, told IPS: “People are free to cross the border from both sides during the day.”

When Patrick was asked if the police performed security checks on the arrivals, and if officials feared the smuggling of minerals and weapons, he answered in the negative.

Patrick said that occasionally M23 rebels crossed the border into Uganda – unarmed and in civilian dress – to go shopping or to visit relatives.

According to a U.N. interim report from the Group of Experts on the DRC, released in June 2012, this leaves open the question to what extent the Ugandan government is involved in activities beyond their border lines.

At the transit centre, the asylum seekers are registered with the Ugandan Red Cross and the UNHCR. Afterwards, they gain official refugee status and can claim the same services that are available for nationals, including free health services and a work permit.

“The M23 rebels came every day and requested food and money, threatening to kill us if we didn’t give them what they wanted. But here, in Uganda, I can even get my own plot of land to farm,” David Byirangiro, a refugee from eastern DRC, told IPS.

Meanwhile, the U.N. World Food Programme (WFP) is struggling to keep up with food supplies, as the conflict in North Kivu appears to continue unabated.

A spokesperson for WFP Uganda, Lydia Wamala, told IPS: “Even though we have had some contributions from the United States, Japan, and the United Kingdom this year, WFP still has a funding shortfall for refugees in Uganda. Most of the world’s attention is on Mali, Syria and others, but we need the world to know that political instability continues also in DRC.”

The organisation has already started to cut food supplies down by up to 50 percent within the refugee settlements. If the numbers of asylum seekers keep rising, the situation could worsen.

And there is no indication that it will end soon. On Saturday, Feb. 23, one day before the official signing of the peace agreement in Addis Ababa, there were reports of renewed fighting in North Kivu.

On Feb. 24, leaders of 11 African nations and U.N. Secretary-General Ban Ki-moon met in the Ethiopian capital Addis Ababa to bring an end to the war in eastern DRC. The delegation also discussed the deployment of an intervention force under U.N. command. However, the major stakeholders in this conflict – the rebel groups, particularly the FDLR and M23 – were not invited to the peace talks.

And the talks do not offer those caught in the conflict much hope.

“The peace talks are completely useless. We’re fed up with this conflict which never seems to come to an end,” refugee Florence Mahirwe told IPS.

She is not hopeful that the conflict in her country will end soon, but she hopes to find peace in Uganda. “I’m not planning to go back to DRC. I’m desperate for peace, security and stability.”