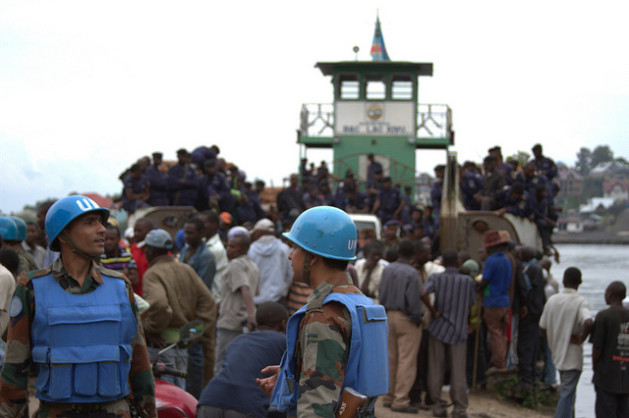 Government police arrive on a boat at Goma's port as U.N. peacekeepers watch on in December 2012 after the M23 withdrew from the town in eastern DRC. The U.N. has changed its mandate from a peacekeeping force to an intervention one starting early May. Credit: William Lloyd-George/IPS

JOHANNESBURG, Apr 24 2013 (IPS) - As the first of South Africa’s troops are expected to begin arriving in the Democratic Republic of Congo as part of the United Nations intervention force at the end of April, governance experts have welcomed the world body’s new mandate in the Central African nation.

According to Dr. Ola Bello, the head of the Governance of Africa’s Resources Programme at the South African Institute of International Relations (SAIIA), the bolstering of U.N. forces in the DRC is long overdue.

On Mar. 28, the U.N. Security Council (UNSC) resolved to move its presence in the DRC from a stabilisation and peace-keeping force to an intervention one.

“The core U.N. force has been too force-shy, as evident in the rebel takeover of Goma in late 2012,” Bello told IPS. The M23 rebels seized Goma in December 2012, but withdrew after a weeklong occupation of the town.

According to the U.N., more than 500,000 people have been driven from their homes in North Kivu, a province in eastern DRC, because of the rebel conflict.

U.N. Organization Stabilization Mission in the DRC (MONUSCO) spokesperson Madnodje Mounoubai announced on local radio station Radio Okapi, which is backed by the U.N., that the resolution gave the 3,069-strong brigade the mandate to neutralise about 40 armed groups operating in the country. This would be done “with or without the Congolese army” with effect from early May, he said.

The neighbouring countries of Tanzania, Mozambique and South Africa will be contributing troops to the force.

However, Omar Kavota, the deputy chair of the North Kivu civil society platform, told IPS that they condemned the transportation of South African arms through Uganda. Experts from the U.N. have accused Uganda and Rwanda of supporting the M23 rebels.

According to Radio Okapi, the consignment from the Bloemfontein military base in South Africa was transported to Uganda and then the DRC.

Bello said that there were potential pitfalls to South Africa’s inclusion in the combat unit, as they could be perceived as not being neutral.

He added that South Africa was seen as being close to President Joseph Kabila’s government, “which could be interpreted as being anti-Rwanda and anti-Uganda.

“Confronting the M23 also carries some inherent risk since the rebel movement purports to (and in reality, does to some extent) represent the interest of ethnic Tutsis in eastern DRC.

“South Africa and the other (countries that are) committing these additional combat forces will have to be careful that their actions are not seen as taking sides in what is partly an ongoing internal conflict within the different regional and ethnic groups within the DRC,” Bello said.

However, questions have been raised about the Africa Union’s role in peace-keeping on the continent.

“Performance has, however, been uneven with the modest success in Somalia, for example, (and has been) marred by precipitous failures elsewhere, such as in Darfur, Sudan, as well as with the AU’s marginalisation by Nato in the Libyan conflict.”

In 2003, civil war broke out in Darfur, leading to the deaths of tens of thousands of civilians. In 2006, a peace deal was signed between the parties through the assistance of the AU and in conjunction with the U.N. And in 2011, Nato assisted Libya with armed strikes during the uprising against former President Muammar Gaddafi (1969-2011). The AU had instead tried to bring a peaceful end to the rebellion and then later delayed recognising the new Libyan rulers.

Dr. Annie Chikwanha, a senior research fellow at SAIIA, agreed with Bello. She told IPS that the AU’s diplomatic approach may be designed to give member states a chance to resolve their own disputes but “experience in the countries where violent conflicts have erupted have shown that this ‘ideal’ solution does not produce the desired results.

“A more energised, collaborative and quick reaction approach is likely to yield better and more sustainable results in protecting citizens from their leaders,” she added.

Chikwanha said that the limitations placed by Chapter VIII, Article 53 of the U.N. charter, that no enforcement action shall be taken under regional arrangements or by regional agencies without prior authorisation from the UNSC, crippled the AU and made it appear ineffective.

“The AU has thus tended to appear on the scene after much of the killing (has taken place) since its diplomatic appeals would have failed to yield the desired results. Yet it has many other options it can use to prevent such catastrophes,” she said.

A lecturer of political science at the University of Zimbabwe, Professor Eldred Masunungure, echoed her arguments. “Disconnections in the institutional functioning of the different units in the AU system prevent the much-needed collaboration in resolving conflicts in general.

“Reaction time is slowed down by well-known incapacity to mobilise quickly a peace-keeping force to prevent the escalation of the conflicts and minimise civilian casualties,” Masunungure stated in a 2012 journal article, which he co-wrote with Chikwanha, titled “The African Union and Election-Related Conflicts in Africa: An Assessment and Recommendations”.

Chikwanha said that the Peace and Security Directorate within the African Union Commission was directly responsible for attaining the AU’s goal of building peace and security.