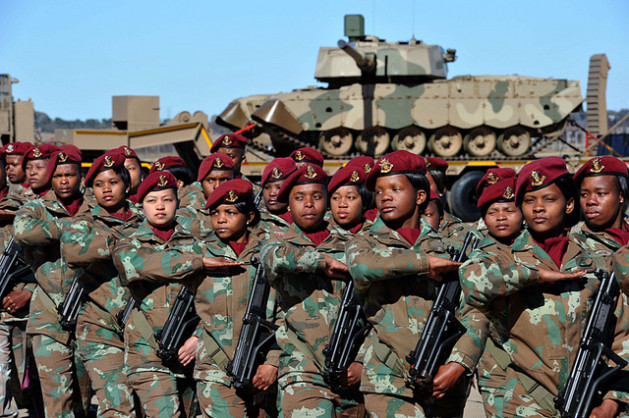 Opposition parties questioned the move to deploy the South African National Defence Force to the Democratic Republic of the Congo. Credit: GovernmentZA/ /CC by 2.0

JOHANNESBURG, Apr 12 2013 (IPS) - Kholekile Dlamini has been devastated by the death of her son Xolani Dlamini, a South African National Defence Force soldier who died in the Central African Republic. Like many South Africans, she had not even been aware of the SANDF deployment to the resource-rich nation.

Xolani Dlamini, 27, was killed by Séléka rebels in the Central African Republic (CAR) almost three weeks ago during a Mar. 24 coup d’état that left 13 SANDF soldiers dead, 27 wounded and one missing.

Sobbing, his mother told IPS that the surviving members of her family were “saddened and shocked” by the untimely death of “Rifleman” – as Xolani Dlamini was affectionately known.

And as the SANDF announced on Tuesday Apr. 9 that all soldiers had been officially withdrawn from CAR, the South African government has kept a tight lid on information about the controversial deployment that was allegedly carried out to prevent former President François Bozizé from being ousted by rebels.

But as South Africa’s public still remain largely unaware of the activities of the mission, news broke on Sunday Apr. 7 that the country would soon be sending troops to the Democratic Republic of the Congo (DRC). Opposition parties questioned the move and demanded that President Jacob Zuma inform parliament about the details of the deployment.

Professor Shadrack Gutto, a constitutional law expert at the University of South Africa, told IPS that with the events in CAR “still fresh in everyone’s minds, the rebels in the DRC will take advantage of this.”

South Africa agreed to send the troops after a March resolution by the United Nations Security Council called for the deployment of an intervention brigade in the DRC. The offensive aims to neutralise rebels, including the M23 rebel group, in eastern DRC.

“The president should come clean on the issue. He is obliged to tell the public the reasons for the deployment of the SANDF in CAR, rather than hide behind the facade of protecting national interests,” Gutto said.

However, South African presidential spokesperson Mac Maharaj told IPS that parliament had been informed of the CAR deployment, and that the public’s right to know was taken into account. He said that on every occasion when deploying the SANDF, the president did so in line with constitutional requirements and informed parliament. He added that the president would continue to follow the constitutional requirements when deploying South African soldiers.

While SANDF spokesperson Brigadier Xolani Mabanga confirmed to IPS that South Africa would deploy more troops to the DRC by the end of April, he would not disclose how many.

But the military-hardened M23 rebel group tweeted that they would retaliate if they were attacked by the SANDF. Mabanga responded, saying that the SANDF would not be “deterred to carry out their international obligations because of an internet message. The SANDF will be ready to execute any task assigned to them.”

Meanwhile, unconfirmed reports by opposition parties have suggested that the CAR deployment was initiated to guard the ruling African National Congress’s (ANC) mining interests. The ANC has denied the allegation.

For five years, undisclosed numbers of SANDF soldiers assisted in propping up the fragile CAR government. The South African government said that this had been part of a bilateral agreement with the CAR government, signed in 2007 and renewed in 2012, to provide training to the CAR presidential guard.

David Zounmenou, Central Africa specialist at the Institute for Security Studies, told IPS that many observers believe “this is far from reality” and accused South Africa of deploying troops because of mining concessions.

“It is still difficult to verify the accuracy of these observations. The context in which the deployment took place was problematic. Bozizé was attacked by a coalition of rebel groups. And even though regional partners such as Chad, Gabon and Cameroon moved in early to stop the progress of the movement and forced them into negotiation, Bozizé had lost confidence in the regional mechanisms,” said Zounmenou.

“His initiative to invite South Africa in (to defend against the rebels) was not well appreciated. Indeed, with South Africa’s presence, he thought he was no longer vulnerable, became arrogant and disregarded the peace deal concluded in Libreville.”

Séléka had launched an offensive against Bozizé’s rule last December. It resulted in the Libreville Agreement, a peace accord signed in January between Séléka and Bozizé’s government.

However, Zounmenou believes that South Africa still has a role to play in peace-keeping missions on the continent.

But he warned that the country should always seek an international mandate from the U.N. before deploying and should operate within regional arrangements.

“South Africa also has to make sure that there is a peace to keep and that soldiers are sufficiently equipped to protect themselves,” he said.

But a question remains: What is the way forward for CAR?

Zounmenou said that CAR has an opportunity to chart a new course that breaks with the past remedies of electing coup leaders into democratically-elected governments.

There is likely to be an 18-month transition period, which could see Djotodia filling the role as transitional president.

Alternatively, he could be elected as the transitional president and required to give up power after the period ends. According to the AU, coup leaders and leaders of transition governments should not be part of the electoral process.

But Zounmenou doubts if the latter will take place.