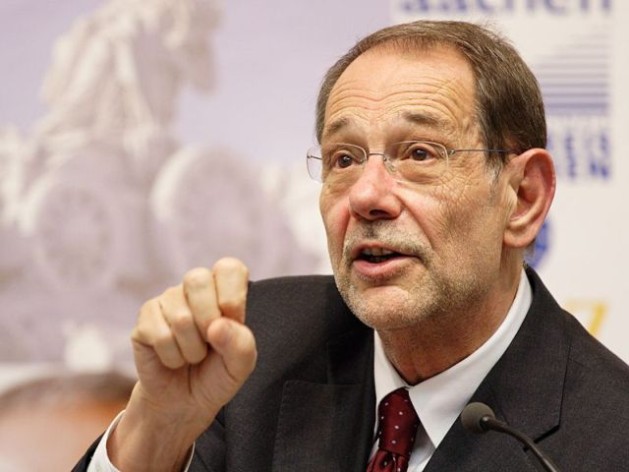 Javier Solana, a former NATO secretary-general who was Iran’s chief European interlocutor from 2003 to 2009, does not think it is possible to reach an agreement on Iran’s nuclear programme without also addressing Syria. Credit: cc by 2.5

WASHINGTON, Apr 1 2013 (IPS) - On the eve of its second round of talks with Iran on curbing its nuclear programme in Almaty, Kazakhstan, the so-called P5+1 (U.S., Britain, France, China, and Russia plus Germany) is showing signs of growing disunity, according to the European Union’s former top foreign policy official.

Speaking at a forum at the Brookings Institution here, Javier Solana, a former NATO secretary-general who was Iran’s chief European interlocutor from 2003 to 2009, suggested that Russia and China, in particular, are likely to oppose any additional sanctions or other pressure against Tehran if the Almaty talks, currently scheduled for Apr. 5-6, fail to yield much progress.

“I think that the level of consistency and coherence of the P5 (+1) is diminishing,” he told a standing-room-only audience. “It is diminishing first because of Syria. Remember that (on) Syria, China and Russia are not in the same place (as) the Americans and the Europeans, and that is an important issue. It is not a minor issue, because… (for) Iran, Syria has an important relationship. If on that we are not together, it will be more difficult to solve” the problem.

Syria was so important to Iran, he went on, that he did not think it possible to reach an agreement on Iran’s nuclear programme without also addressing Syria.

But Syria is not the only issue, he added, noting that at the so-called BRICS summit last week in South Africa, the leaders of Brazil, Russia, India, China and the host country, who have historically confined their statements to economic issues, jointly expressed growing concern about “threats of military action as well as unilateral sanctions” against Iran and urged all “disagreements with Tehran to be resolved by political and diplomatic means” alone.

Emerging powers, said Solana, are increasingly unhappy with Western pressure to curb imports of Iranian oil and gas, especially in light of the latest estimates of a possible spike in energy prices next year if Iranian supplies are kept off the market.

“That is something the Chinese (and) nobody wants,” he said, adding that China may be forced to increase Iranian imports to maintain its high economic growth rate.

Solana’s remarks come amid bubbling speculation about possible progress at Almaty which will take place two weeks after technical talks between the P5+1 and Iran in Istanbul.

According to Laura Rozen, an especially well-informed observer of the talks for the Al-Monitor website, the Iranian delegation agreed to consider suspending their 20-percent enrichment of uranium for a six-month period and to convert their existing 20-percent stockpile to uranium oxide for medical use in exchange for some relaxation of Western economic sanctions as a confidence-building agreement.

Their presentation was regarded as moving Tehran marginally closer to a P5+1 offer tabled during the first Almaty round in February.

At that time, the six powers agreed to provide modest sanctions relief, primarily by permitting Turkey and other countries that have traditionally imported Iranian oil and gas to pay in gold in exchange for Tehran’s suspension of 20-percent enrichment operations at its underground Fordo facility, shipping its 20-percent stockpile out of the country; and ramping up inspections by the International Atomic Energy Agency (IAEA).

According to Rozen’s sources, however, Iran raised numerous objections to the proposal at the Istanbul meeting.

Gary Samore, who served as President Barack Obama’s top nuclear adviser during his first term, told the Brookings audience Monday that he thought the P5+1 offer was a “good deal” for Iran “if it is looking at ways to create a respite” from further economic sanctions which, he added, Washington and the three European countries are certain to push through in the absence of some interim agreement.

But he was doubtful that one would be achieved later this week in Almaty. “I have such low expectations for what’s going to come out of this next round of talks that I think it’s a mistake to try to set the bar,” he said. “If they agree to another round of meetings, that will be the process continuing, but I think that it really is unrealistic to expect that there’d be some kind of breakthrough in these talks.”

“Both sides are using diplomacy for their own purposes: the Iranians use diplomacy in an effort to show there’s progress and therefore no further sanctions are justified, and to the extent it looks like there’s progress, it helps maintain the value of the rial,” said Samore, who is now at the Kennedy School of Government at Harvard University.

“The U.S. and the P5+1 use diplomacy in order to demonstrate that Iran is being intransigent and unreasonable, and therefore more sanctions are required.”

“And that process is going to continue. …(I)f this next round of talks doesn’t produce results, the U.S. and the EU will be looking for additional sanctions in order to increase pressure,” he said. “…I think it’s possible Iran could decide after the presidential elections (in June) to accept the small deal on the table now.”

He stressed that Iran’s Supreme Leader, Ayatollah Ali Khamenei, both wants to avoid a U.S. military attack and to obtain a “nuclear weapons capacity” because he views the nuclear issue as part of a much broader struggle with the United States (which) “he believes is trying to destroy the Islamic Republic.”

On Syria, Samore argued that regime change will make a deal with Iran “more likely because the Supreme Leader will feel more isolated, under greater pressure, more likely to make tactical concessions in order to relieve further isolation and pressure.

“Of course that’s not going to change his fundamental interest to obtain a nuclear weapons capacity. I think it will confirm for him is the best way to defend himself against countries like the United States is to have that capacity.”

For his part, however, Solana said the West should be “much more engaged with Russia” on both Syria and Iran. Having met with President Vladimir Putin in Moscow two weeks ago, Solana reported a high level of distrust vis-à-vis the U.S. and regarding Washington’s intentions in Syria, and “my fear is that they may get cooler with relation (to) Iran, and we may break an agreement that the P5 may be maintained.”

He said the cohesion the P5+1 has maintained to date had been a “miracle” but suggested it was increasingly under threat.