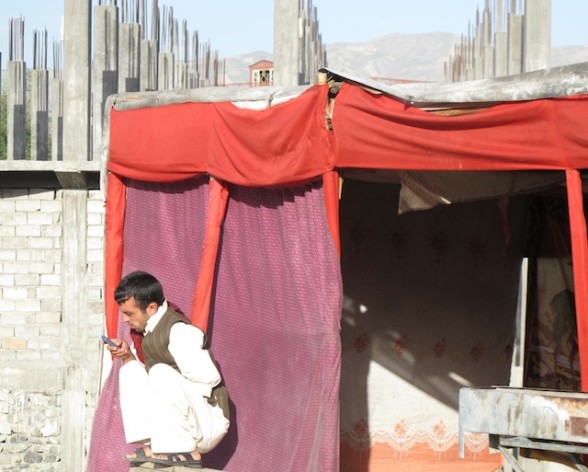 KABUL, May 31 2013 (IPS) - As Afghanistan prepares for the 2014 withdrawal of foreign forces that have occupied this country for over a decade, investors are already beginning to bid a hasty retreat amid rumours that “chaos” and civil war will replace NATO’s boots on the ground late next year.

Among those most fearful of this approaching financial drought are journalists and media organisations who have long relied on international support to stay afloat.

Najiba Ayubi, director of the independent Afghan media group known as The Killid Group (TKG), described the last 10 years as the “golden decade for Afghan media”, which saw the establishment of 175 FM radio stations, 75 television stations and hundreds of print publications that have taken up the cudgels on everything from rural girls’ right to education to the public’s right to information.

The radio stations in particular have been very effective in developing a strong civil society and there is “a serious danger of losing all that if funding dries up,” Ayubi told IPS.

But fear breeds innovation, and as the drawdown approaches, media practitioners are finding creative solutions to the post-NATO quandary, including the creation of a new journalists’ federation, efforts to build a culture of investigative journalism and the drafting of a “code of conduct” for the press.

One of the first responses to the threat of a funding shortage has been a heightened sense of solidarity in times of distress.

When the independent daily Hasht-e Sobh decided to take the Afghan ministry of mines to task in a special edition in late March for “irregular tender procedures” and the squandering of resources on so-called advisors who were paid as much as 107,000 dollars per month, the paper’s editor-in-chief Parwiz Kawa was promptly summoned to the attorney general’s office.

This raised fears that he might be fated to a similar end as the many Afghan journalists who have been killed on the job in the last decade, including two in the past few weeks.

But local media organisations just as promptly issued statements denouncing the violation of the right to free speech. Hasht-e Sobh, winner of Reporters Without Borders (RSF)’s 2012 Press Freedom Award, says the matter is currently on hold.

This spontaneous reaction came partly in response to the paper’s daily struggle for survival: while in 2011 it was able to employ some 125 staff across the country, its bureau has since dwindled to 70, axing crucial correspondents in the eastern city of Jalalabad and the southern Kandahar province.

“We had to let them go when donors cut the funding,” Kawa told IPS, adding that 50 percent of Hasht-e Sobh’s budget comes from international donors, with less than 30 percent coming in from advertising, sales and subscriptions.

The group is now scrambling to secure loans from supporters and began offering a low-cost SMS news alert service through an agreement with telecommunications provider Etisalat two months ago.

The service has already attracted 15,000 subscribers and hopes to eventually reach at least 100,000 of Afghanistan’s estimated 30 million inhabitants, according to Kawa.

Ayubi is similarly concerned about the future of TKG, which achieved full self-sufficiency in 2005 but took a hit after the announcement of the 2014 military pullout. With advertisers’ pockets growing shallower, Killid has once again resorted to seeking grants in order to maintain its operations.

According to Ayubi, it is particularly important for media organisations to remain functional in the lead up to the April 2014 presidential elections so that the population can make informed decisions.

Nader Nadery, former human rights commissioner of Afghanistan and current executive chairman of the Free and Fair Elections Foundation, highlighted the crucial role the media plays in nurturing a vital society, pointing out that news sources have become much more critical of the government’s failure to deliver on its promises.

This initially caused the government to dig in its heels and adamantly refuse to release even the most innocuous information on the grounds that it is classified and that releasing it would pose a “national security risk.”

But after extensive lobbying by media and civil society groups, the government published a draft Access to Information law earlier this year.

Though the Centre for Law and Democracy has criticised the draft on a number of points – such as the restricting of access to “information that serves a right or brings ease to performing of the relevant duties’’ – Nadery believes the government’s overture to civil society represents an “important step forward” for press freedom and the right to information.

The code calls for journalists to pay greater attention to the psychological and social impact of news reports, especially those covering delicate issues like child abuse and rape, and aims to “sensitise” the public by, for example, refraining from using the word “criminal” for those not yet convicted of crimes. Dashti believes this will also strengthen the public’s trust in media outlets.

Though his own widely respected publication ‘Kabul Weekly’ folded in 2011 due to financial difficulties, Dashti is hopeful about the overall future of journalism.

Meanwhile, the newly established Afghan Journalists’ Safety Committee has embarked on efforts to alleviate some of the risks journalists incur in their work, offering first aid training, medical treatment, and legal advice. A 24-hour hotline offers a lifeline to distressed journalists by connecting media practitioners with a vast network of civil society activists, as well as local and international media.

In a country where the literacy rate is estimated to be hovering close to 28 percent, though, print publications will find it the hardest to survive.