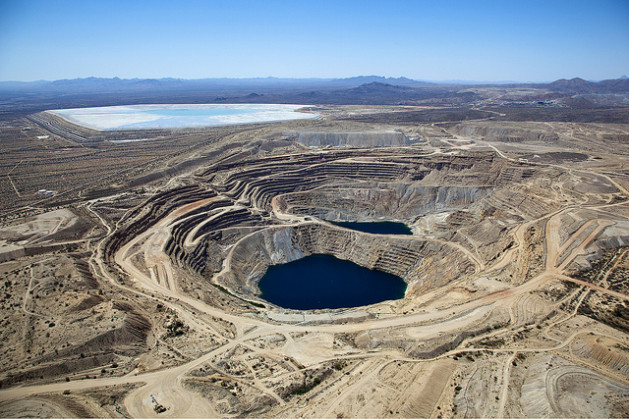 WASHINGTON, May 16 2013 (IPS) - Trillions of dollars a year are being produced through extractive industries, but just a tiny percentage of this money is impacting on the lives of poor communities in developing countries, according to a first-of-its-kind study released Wednesday.

The revenues being produced by exploiting natural resources in developing countries already massively outweigh development-focused foreign aid flows. But according to new research from the Revenue Watch Institute, a global watchdog group, there is a startling correlation between economic dependency on natural resources and low human development indicators.

“The 58 countries [studied] produce 85 percent of the world’s petroleum, 90 percent of diamonds and 80 percent of copper. Profits from their extractive sector totaled more than $2.6 trillion in 2010,” according to Revenue Watch’s new Resource Governance Index, unveiled here Wednesday.

“Revenues from natural resources dwarf international aid: In 2011, oil revenues for Nigeria alone were 60 percent higher than total international aid to all of sub-Saharan Africa. The future of these countries depends on how well they manage their oil, gas and minerals.”

Of those 58 countries, more than 80 percent have reportedly failed to put in place satisfactory standards for openness in these sectors – and half haven’t even taken basic steps in this regard.

Revenue Watch analysts say the findings constitute a “striking governance deficit”. While such problems have been widely known on an anecdotal basis, this is the first time these issues have been systematically disaggregated and compared.

“The index is a real wake-up call about how far we still have to go in managing public resources effectively and for the betterment of poor populations around the world,” Warren Krafchik, director of the International Budget Partnership, a Washington-based project that works to strengthen civil society involvement in public budgeting, told IPS.

“Particularly now after the global financial crisis, this data shines a big spotlight on how, while resources can still be transferred from the Global North to the South, the fact is that the South is sitting on really substantial resources of its own. The challenge is how to use those effectively.”

The new data highlight a real opportunity to do something “fundamental” about global poverty, Krafchik notes.

“It’s really not the amount of public resources that’s available that’s the primary obstacle to overcoming extreme poverty,” he says. “The issue is how those resources are managed and distributed.”

Similarly, several analysts are suggesting the data could influence discussion on the new international development agenda following the expiration of the Millennium Development Goals (MDGs) in 2015.

“Clearly, 2.6 trillion dollars has major transformative potential in terms of translating these natural resources riches into human capital. Further, oil-rich states are three times less likely to democratise than are the non-oil-rich, so this matters from a political standpoint, too. This is the development challenge of the decade.”

In terms of extractives governance, particular problems appear to be concentrated in northern and southern Africa and the Middle East. Latin America, on the other hand, is seen as generally doing better, with Brazil, Mexico, Chile, Colombia and Trinidad & Tobago all ranked in the top 10.

The index is topped by developed countries, with Norway, the United States (though only regarding its extractives work in the Gulf of Mexico) and the United Kingdom the only countries rated satisfactory on all indicators. Australia and Canada (though only its sector in Alberta) are also in the top 10.

However, the governance findings are more complex, and more interesting, than a simple breakdown of poor versus rich countries. Kaufman says the data rejects “the tired notion of the deterministic ‘resource curse’”.

“The silver lining here is that there’s variation – a number of countries have satisfactory performance, and those are in diverse contexts, including in emerging economies,” he notes.

“Among those that perform poorly are some very rich countries, particularly in the Gulf. Just being rich isn’t necessarily an indication that a country is performing well, and being a developing country isn’t a rationale for doing poorly.”

While many are suggesting that the new index will provide an important tool for identifying country-level problems, debate remains over how to rectify these issues. While political will in affected countries will clearly be a paramount factor, potential roles for the international community are less clear.

“Of the 46 countries with below satisfactory levels on this index, just six have external assistance levels greater than five percent of gross domestic product, and only three are higher than 15 percent,” George Ingram, a senior fellow at the Brooking Institution, a think tank here, said, suggesting this route of influence is a “dead end”.

“However, that money can be used to enhance the performance of government capability … For instance, on taxation, there is a new movement of acknowledging that we need to help developing countries develop their capacity to develop their own revenues.”

Over the past decade, international discussion on natural resources governance has coalesced around a set of standards known as the Extractive Industries Transparency Initiative (EITI). According to the EITI website, 21 countries are currently considered compliant with the initiative, while another 16 are pending candidates.

Yet EITI is still codifying its standards, and several EITI-compliant countries fared poorly on the new Governance Index. Advocates are particularly calling for the inclusion of contracts in the EITI transparency requirements, and several such major reforms will be discussed next week at an EITI board meeting in Australia.

Revenue Watch and others say the most potent role in ensuring government accountability in this regard will fall to national-level civil society.

“Control over resources traditionally meant power, and the incentives for politicians to give that up are really low,” Carlos Pascual, a U.S. State Department official, said Wednesday.

“You have to create different incentive structures, and changing that equation will have to strengthen the role of civil society and the political processes by which pressures can be brought on politicians to link their ability to stay in government with how they manage the resource base. We’re at the very beginning right now on thinking about what the best models may be … but at least we’re starting to have that discussion.”