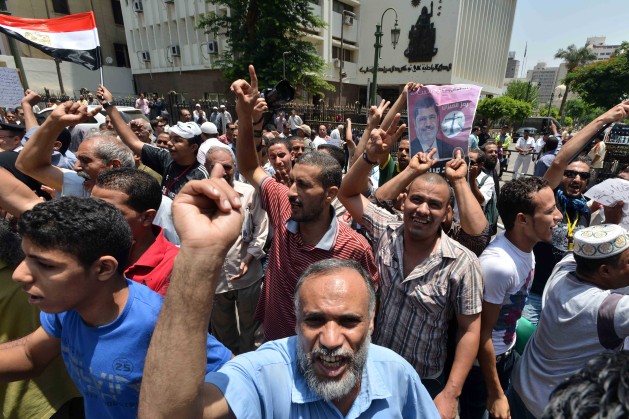 Former president Anwar al-Sadat gave them some liberty after he came to power in 1970 but his move backfired when radical Islamists assassinated him in 1981.

The Muslim Brotherhood is Egypt’s oldest and largest organised Islamist movement. Its ideology is based on the teachings of its founder Imam Hassan al-Banna, who launched it in the 1920s.

The Brotherhood – or Al-Ikhwan Al-Muslimun as it is called in Arabic – influenced Islamist movements around the world with its model of political activism combined with charity work. Its work is financed by contributions from its members, who are required to allocate a portion of their income to the movement.

“Morsi was not straightforward with the Egyptian people.”

“But despite the Brotherhood’s political power, it exerts virtually no control,”  presidential candidate in 2011 Khalid Ali told IPS. He accused the Muslim Brotherhood of excluding other opposition  movements and concentrating authority in its hands.

The Islamists, he said, are “hungry for power and full of fear.” The Muslim Brotherhood has been sharing authority only with their allies from Salafist groups who have fundamental Jihadi backgrounds, he said.

Islamist movements widely lack administrative efficiency and political experience, he said. Entrusting them with administration has led to decomposition of the state, and to fears of civil strife.

Many millions of Egyptians have meanwhile signed up to the ‘Tamarrod’ – or rebellion – campaign, which is calling for early presidential election to mark President Mohammed Morsi’s first anniversary in office on Jun. 30.

Khalid Ali who used to work as a labour rights defender stressed that the Brotherhood can avert the planned demonstrations of Jun. 30 by announcing serious reforms for all of the Egyptian people, not just for a select group. Failing that, anger among the people will be difficult for Morsi to control, he said.

After coming to power on Jun. 30, 2012, Morsi began to replace top officials with members of his group. Many of his critics say this has split Egypt into two: Egyptians and Islamists.

As recently as Jun. 17, Morsi appointed seven Brotherhood members among 16 newly appointed governors. Critics said the reshuffle was only the latest example of the Islamist group attempting to monopolise power and exclude other political forces from the decision-making process.

The new appointments included the controversial decision to award governorship of Luxor to a member of the hardline Islamist group Al-Gamaa Al-Islamiya. The move sparked public outrage – it was this group that was believed to have orchestrated the attack on Luxor’s West Bank in 1997 in the Temple of Hatshepsut that killed 58 foreign tourists and four Egyptians.

The new appointments have led to a wave of protests in several governorates, and clashes between Brotherhood supporters and opponents. This has led further to general unrest across the country. Clashes continue to erupt nationwide between Morsi’s supporters and ‘rebel’ campaigners in the run-up to the Jun. 30 demonstrations.

There have been several moves to fill top posts with Brotherhood men. Morsi spent more than three weeks looking for his prime minster and then appointed Hisham Qandil, ending up placing both the executive and legislative authority in the hands of the Brotherhood.

Kamal el-Helbawi, formerly a senior member of the Muslim Brotherhood, told IPS that the failure of the President to implement his promises, and his poor performance were the most important factors behind the anger of the people, and spurred their desire to overthrow him on Jun. 30.

“He was not straightforward with the Egyptian people,” the former veteran member of the Brotherhood said. Morsi’s failures began early, he said, and allies who had stood next to him abandoned him after he went back on his promises.

“The biggest problem now,” el-Helbawi told IPS, “is that the President believes that the non-Islamist role ended after the completion of the revolution.” Morsi forgot, he said, that today’s enemies were yesterday’s allies and partners in the revolution.