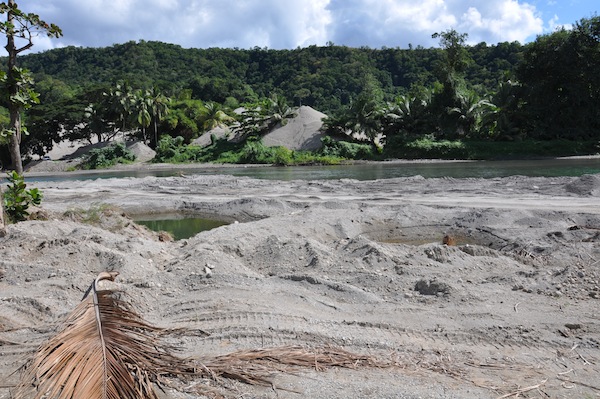 CODRINTON, Barbuda, Jun 22 2013 (IPS) - Arthur Nibbs was known for his staunch opposition to sand mining in his homeland of Barbuda, a Caribbean island with dazzling white sand beaches that comprise most of its deserted coastline.

But Nibbs, the chairman of the Barbuda Council, has had a change of heart because of the economic hardships residents face here, he said.

He is dismissing warnings by environmentalists that sand mining has exceeded safe limits and that its continuation is placing Barbuda, the tiny island in the Antigua and Barbuda union, at ever-greater risk from storms and sea level rise.

“Reality has set in,” Nibbs told IPS, noting that the council is currently in deep financial trouble. “Our finances usually come from the central government,” he explained, but the government itself is in “a precarious situation”.

"Sand mining...is the only revenue source that we have."
-- Arthur Nibbs

“We are forced to continue…sand mining because that’s the only revenue source that we have, and we need to meet our obligations on a daily basis,” he said.

“Would you prefer to appear to be protecting the environment and then have your people going hungry with no food on their table and people can’t pay their bills?” he asked.

He is fully aware that he now appears to be flip-flopping on the subject.

“I’m sure the whole of Antigua and Barbuda is accustomed to hearing me talk about sand mining and the damage that it has done to the environment,” he agreed, noting that he had “every intention” of trying to move away from the practise.

“But that just was not possible,” he argued. “You have to take care of the people right now.”

Nibbs is not against a long-term development strategy for the island, but he says that “sitting down making up a development plan will not pay your bills” and that developing such a plan and finding ways to meet people’s daily needs must occur simultaneously.

He is optimistic that under his leadership Barbuda will pull itself out of this situation, and he pointed to planned development in the form of hotel resorts in about 18 months to two years.

“We do need something that can give us money quickly,” Nibbs said. “Sand mining is the only thing.”

But marine biologist John Mussington is worried Barbuda is digging its way off the planet.

Sand mining here began in 1976 and by the mid-1990s, major environmental reports were warning that the extent of mining was causing irreparable damage.

“The fact of the matter is [that]…in 2006, the technicians from the environment division came to Barbuda and they were so shocked and appalled at the damage that was being done that they called for an immediate halt to sand mining,” Mussington told IPS.

The technicians said that in the long run, mining would expose Barbuda to many consequences of climate change, and they recommend that the island cease mining.

Following a 2006 cabinet decision, Mussington said, the technicians conducted surveys, and 103 acres were allocated for sand mining. But within a year and a half, those 103 acres were exhausted.

“Sand was supposed to be taken out following certain strict guidelines but the guidelines were never followed. The acreage given was exhausted.”

Fuller added that cruise tourism could also be a source of income. “Many of the ships visiting some of the Caribbean’s most celebrated destinations anchor offshore and tender their guests to little docks on the mainland,” he said.

“Without any significant investment, this could happen in Barbuda almost immediately. One or two small ships a week could provide significantly more employment than the entire mining industry does in Barbuda,” Fuller added.

In the neighbouring island of Nevis, authorities have adopted a zero tolerance approach to sand mining.

Premier Vance Amory told IPS that the wellbeing of the island’s pristine environment is of utmost importance to his administration.

“The erosion of our coastline has cost us a loss of significant historical proportions,” he said. Illegal sand mining “reduces the beauty of the beaches”, which are critical for tourism, he said. It also leads to erosion and creates a situation that makes breaking the law more likely in other areas.

“We are intent as an administration on restoring respect for our environment,” Amory added.

The minister of agriculture in the Nevis Island administration, Alexis Jeffers, said sand mining is hurting marine life on the island.

“The sand is there for a reason,” he told IPS. “If we remove it, we remove a particular element of the ecosystem that would create problems for the future generations to come.”