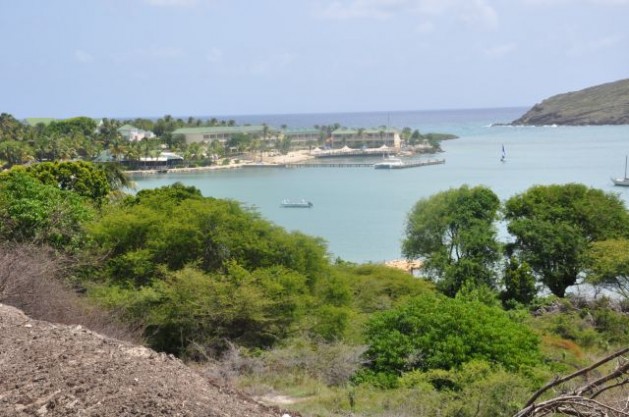 Hotel in Antigua. Most hotels in the Caribbean are built on the beaches and coasts. Credit: Desmond Brown/IPS

BASSETERRE, St. Kitts, Oct 17 2012 (IPS) - The postcards portray sand, sea and sun. But key players in the Caribbean tourism industry are warning that it’s time to shift gears away from the region’s threatened coastlines and instead promote inland attractions like biodiversity.

“Climate change is one of the things that is affecting the hotel industry, and the fact that most of our hotels are right on the beaches (means) they are subject to violent storms, the frequency of which has been projected to increase due to climate change issues,” hotelier and social entrepreneur Valmiki Kempadoo told IPS.

“Outside of Trinidad and maybe a large country like Jamaica, tourism is by far the largest economic driver of these smaller islands…and we have to seek new solutions, new business models that could take this thing into the 21st century,” he said.

Kempadoo is urging his regional counterparts to move their properties away from the beaches, noting that in light of the effects of climate change “having a hotel at 500 feet or 1,000 feet above sea level can help in that general direction”.

He said while the Caribbean is known best for its beaches, there are also lots of other experiences the different islands can offer.

“The climate away from the beaches is much better. It’s an incredibly fertile place where we can grow all these amazing exotic tropical fruits and vegetables that we have a world class collection of,” he said.

Dominica’s Tourism Minister Ian Douglas knows only too well the devastating effects of climate change on the tourism-dependent economies of the Caribbean.

In fact, he told IPS Dominica is probably one of the islands most affected by this global phenomenon.

“The islands are hit by hurricanes every year and that costs the islands millions (of dollars) to the point where governments have to look at some kind of disaster risk fund to mitigate against the damage,” he said.

“At least one of the islands gets hit every year and Dominica is no exception. In fact we are seeing a new phenomenon in Dominica right now where we are have massive flooding, something that was never before seen, and last year this caused considerable damage even to some of our tourism plants and equipment.”

Douglas noted that Dominica, with most of its hotels on the west coast on the Caribbean Sea, “takes a beating every year”.

And he said the island now has to grapple not only with sea surges and rising sea levels, but also severe flooding in its 365 waterways.

“We have about three of our rivers within the Canefield to Layou area experiencing massive flooding and villages had to be evacuated. Riverbanks were flooded out, bridges and homes were destroyed to the point where government had to actually give families grants for short-term replacements.

“I’ve said all of that to tell you how much climate change continues to affect Dominica. It’s an issue that we continue to grapple with. We actually have a department formulated specifically for dealing with the challenges posed by climate change,” he added.

Sam Raphael, the owner of Jungle Bay Hotel in Dominica, smiles at the suggestion from Valmiki Kempadoo.

He said when he established his jungle resort several years ago, “it was out of an acknowledgement that it is imperative that we make some radical changes and improvement to our tourism industry if it is to survive.

“A few years ago, our industry accepted a false choice between enterprise development and protecting our fragile natural environment. The empowerment and capacity building of our people to be the entrepreneur drivers of the primary industry of our region, our daily bread, was not a priority,” he said.

Nestled in the forests along Dominica’s east coast, the Jungle Bay Hotel focuses on nature-based activities and wellness of guests.

Grenada is also moving to diversify its sun, sand and sea tourism product. And as the island moves towards greater sustainability, Tourism Minister Dr. George Vincent points to the importance of the energy sector.

“We are working with the electricity company to produce alternative energy in the form of wind. We are encouraging the hotels to do solar energy to replace fuel costs. But the sustainable tourism thing is where we’re heading,” he said.

“I tell folks — long ago things like IT and languages were important. Now, they are only platforms to build on. So we are building a sustainable platform, and we will. Everything down the road is supposed to be sustainable, green, eco-friendly. So we have the energy, we have the preservation, we have the rainforest, and we have a number of marine parks that are well-preserved.

“So we’re doing fine in the area of preservation, and we are now going to convert that preservation to use, and make it work for us. So we feel that Grenada benefits greatly from preservation and conservation,” Dr. Vincent, who took over the tourism portfolio in May of this year, added.

A recent State of the Industry Conference, held here Oct. 10-12, was facilitated by the region’s tourism development agency, the Caribbean Tourism Organisation (CTO).

Secretary General Hugh Riley told delegates the Caribbean is experiencing the toughest economic conditions since the Great Depression. He urged hoteliers and other tourism stakeholders to assemble all the creativity, discipline and collective resources they have and use them wisely for the good of the region.

“We have to determine what it takes for small, vulnerable tourism economies to effectively compete in an arena that is populated by large industrialised countries with vastly superior budgets and the power to pass legislation that discriminates against us, impacts our competitive position and further shifts the balance of power in the direction of the already powerful,” he said.

“The good news is that we in the Caribbean have more than a few cards to play. We in this cluster of small populations are bold enough to assemble and decide that we can come together as One Caribbean, enlist some of this industry’s sharpest minds, elect leaders, thrash out ideas and mold them into actions that allow us to win in this environment,” he said.