ROME, Jun 21 2013 (IPS) - Pope Francis has challenged the Food and Agriculture Organisation to end global food disparities, describing it as scandalous that despite food abundance, millions of people still die of hunger. 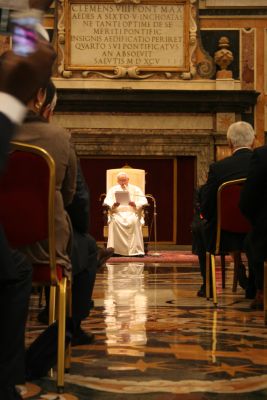 Delegates to the 38th FAO conference have a brief session with Pope Francis in the Vatican. Credit: Busani Bafana/IPS

“It is a well-known fact that current levels of production are sufficient, yet millions of people are still suffering and dying of starvation,” the head of the Roman Catholic Church said during a special meeting with delegates to the 38th Biennial FAO Conference at the Vatican’s Sale Clementina within the Basilica.

“This is truly scandalous. A way has to be found to enable everyone to benefit from the fruits of the earth, and not simply to close the gap between the affluent and those who must be satisfied with the crumbs falling from the table.”

Pope Francis said the world can no longer hide behind goodwill and unmet promises, nor use the current global crisis as a pretext for failing to act on accessing food to everyone. He lamented that human dignity risked turning into a vague abstraction in the face of issues like war, malnutrition, marginalisation and financial speculation which affected the price of food, which was being treated like any other market product.

Praising the reforms initiated by FAO as a positive development for functional, transparent and impartial operations, the Pope said the fight against hunger means dialogue and fraternity for the world food body.

“What is demanded of the FAO, its member states and every institution of the international community is openness of heart,” said Pope Francis. “There is need to move beyond indifference or a tendency to look the other way and urgently to attend to immediate needs, confident that the fruits of today’s work will mature in future.”

Award-winning farmer from Ghana Lemuel Martey Quarshie, one of the delegates who met the Pope, tells TerraViva, “I was happy to meet the Pope because for me this was a once in a lifetime experience. If I had the chance to ask the Pope something, I would have asked him if his role is only pastoral intervention or he can also foster dialogue on food issues.”