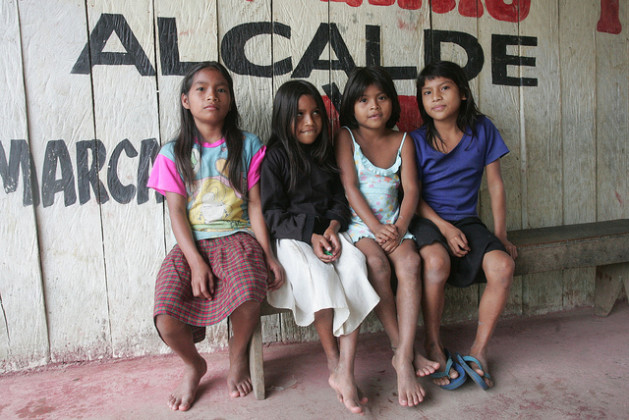 Schoolgirls in an Amazon community. In Peru, the indigenous children of the High Andes and Amazon regions are among the most malnourished in the world. Credit: Milagros Salazar/IPS

Regina Gallego of the U.N. Development Programme (UNDP), the lead agency overseeing the MDGs, told IPS the Fund’s nutrition programme alone has helped draft or revise some 25 national nutrition plans, encouraged the planting of 270 school and community gardens, and improved health access for about 534,000 citizens.

“Directly or indirectly, our contribution has improved the nutritional status of more than 900,000 children and 179,000 pregnant and breast-feeding mothers,” said Gallego, UNDP’s knowledge management specialist.

The 700-million-dollar MDG-F is a collaborative effort between the government of Spain and the U.N. system involving several agencies, both in headquarters and in the field.

For example, it is currently working to improve conditions for indigenous people in Brazil, where four out of 10 live in extreme poverty and more than half of the children are anemic.

The Eco-stoves Initiative is part of the joint U.N. programme “Promoting Food Security and Nutrition for Indigenous Children in Brazil”, a collaboration between the Brazilian government and five U.N. agencies aimed at improving food security and the nutritional status of native populations in the areas of Dourados and Alto Rio Solimões.

The five agencies are the World Health Organisation (WHO), the International Labour Organisation (ILO), the U.N. children’s agency (UNICEF), the Food and Agriculture Organisation (FAO) and UNDP.

In Peru, the indigenous children of the High Andes and Amazon regions are among the most malnourished in the world: up to half of them suffer from chronic malnutrition and many are anemic and Vitamin A deficient.

This Joint Programme is supporting the Peruvian government’s effort to improve food security and nutrition in four of the country’s poorest regions by accelerating implementation of the national strategy titled CRECER.

In Ethiopia, nutrition has improved for children under five, Jimenez said, but the rate of progress must accelerate if the country is to achieve the MDG target of halving by 2015 the number of people who suffer from hunger.

In Vietnam, the programme is focused on improving food security through increased production and consumption of quality food and targeted supplementation.
This is both a short-term strategy to address current issues of malnutrition – through breast-feeding, iron and vitamin A supplements – and a long-term strategy to provide a higher quality diet through improved food production systems, including animal (meat and milk) and aquaculture products.

Asked about funding for the reduction of extreme poverty and hunger by the 2015 deadline, Galego told IPS the general trends of the MDGs indicators show that despite the progress made, eradicating extreme hunger is still a challenge.

About 850 million people, or nearly 15 percent of the global population, are estimated to be undernourished, while one in five children under age five in the developing world is underweight.

Food security is starting to gain ground in the national agendas in a systematic and structured way, she added.

She said the MDG-F programmes have drawn some lessons about key issues to be taken into account, so that the target of reducing by 50 percent those living in extreme hunger can be reached.

A link between food security and nutrition needs to be forged to realise the Zero Hunger Challenge.

To ensure that people not only have enough food, but also sufficiently nutritious food, it is necessary to acknowledge the inextricable link between food security and nutrition security, Gallego said.

“In other words, not just the quantity of the food must be considered, but also other aspects such as its nutritious value and accessibility as well as the health status, socio-economic status and level of knowledge of the population,” she said.

The experience of the MDG-F has proved that multi-sectorial interventions, when applied in a coordinated manner, are more efficient in achieving results.

The key for success is to customise the design of the multi-sectorial interventions by selecting the most relevant sectors, taking into account the specific conditions of the targeted population, including cultural realities, political interests, and involved stakeholders, she added.

The combination package might include sectors such as health, education, agriculture, water, sanitation or energy sectors, among others, Gallego said.

The MDGs, which were formally approved by the General Assembly in September 2000 and launched a year later, expire in 2015.

But since the overwhelming majority of the 132 developing nations have not met their targets, the General Assembly will hold a high-level meeting in September this year to take stock of the successes and failures – and how best to proceed.

Meanwhile, the United Nations is negotiating a new set of goals – Sustainable Development Goals (SDGs), described as a successor to MDGs – which will be part of the U.N.’s post-2015 development agenda.