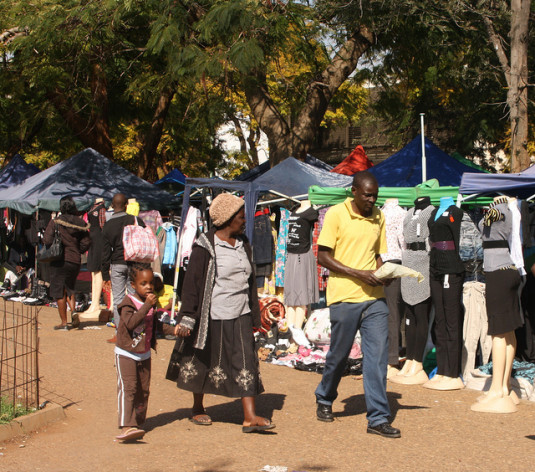 While most Zimbabweans are now informal traders, it is very difficult for the economy to grow and create more development. Credit: Ignatius Banda/IPS

Jun 4 2013 (IPS) - More than three decades after Zimbabwe’s independence, the idea of developing its rural areas seems to have been laid to rest, as points intended for development have been turned into beer outlets, which seem to be more lucrative than industry.

But across the country, those in rural areas are calling for the revival of growth points, the term for the areas set aside for development, even as this southern African nation’s government admitted in January that it had no money to pay for its upcoming general elections.

According to analysts, growth points were meant to develop into towns, complete with their own industries and housing estates. Their purpose was to provide employment in rural areas and improve the local economy, without forcing people to migrate to large cities and towns to find work.

“During the 1980s many growth points were seeded by the government. Investors, mainly in the form of commercial businessmen, were helped to put up structures and start viable businesses, either as individuals or as co-operatives,” Wisedom Ncube, a sociologist from the University of Zimbabwe, told IPS.

“It seems that most growth points are failing to attract meaningful investment except for the building of a few government departments and Grain Marketing Board silos, which have gradually become white elephants,” he said.

People IPS spoke to said that even though the government was in financial trouble, it needed to do something to revive growth points across the country. In January Minister of Finance Tendai Biti told reporters that the country only had 217 dollars left in its public bank account after paying civil servants.

James Mazazi, the village headman in Zvimba, Mashonaland West Province, in central Zimbabwe, is one of those who hold that opinion.

“As years go by, there have not been any meaningful changes at the centres three decades after independence. Pubs are still popular as they were back in the day. Many of our children have crossed the boarders in search of better prospects because the shops that are opened no longer get any assistance from government (to grow their business) and they have remained general dealers,” he told IPS.

Mazazi said that no real development had occurred.

“The government promised to bring investment and create jobs for our youths, but over the years nothing credible has happened and our youths continue to rely heavily on farming as a form of employment,” he said.

And in Zvimba, where the rainfall is erratic and the quality of the soil poor, this is not a guaranteed way to earn a living.

“Here in Zvimba the farming is not reliable. It is even more difficult to make a living as a result,” said Mazazi.

Zimbabwe and its people have suffered from decades of economic and political turmoil, which gradually caused many manufacturing companies to shut down in the major cities of Harare, Bulawayo and Gweru. Between 2003 and 2009, the country had one of the worst rates of hyperinflation in the world and its year on year inflation was reported as 231 percent.

This was compounded by an ailing rail and air system. Eventually, growth points faced neglect as they were never developed to serve their intended purposes.

However, dotted across the country, vast acres of land that were intended to be growth points lie dormant.

“The concept of growth points was mooted by the Zimbabwean government in the 1980s as a means to decongest cities and towns. This was done mainly to curb the rural-to-urban migration through employment creation and the availing of basic services to people in rural areas. Almost three decades later, most of the growth points are undeveloped with beer outlets being the most lucrative businesses,” University of Zimbabwe-based rural and urban planner, and analyst, Innocent Chakanyuka, told IPS.

A rural councillor from Mrewa, Mashonaland East Province, Mathew Nyawasha, said the youth were suffering in poverty due to unemployment despite the potential for job creation at growth point centres.

“If the growth points are developed into industries and employment is created, most of our youth who are now living as refugees in foreign lands might decide to come back and have a better future here where they can live closer to their families,” Nyawasha told IPS.

Silvester Candiero, headman for Nhongo village in Gokwe, a small town in Midlands Province, told IPS that cotton ginneries and tobacco sales offices should be located at growth points. This, he said, would save farmers the tiresome journey to Harare and the hassles that are associated with selling tobacco leaves.

“Tobacco farmers travel considerable distances to Harare and some will be stranded in the capital were they spend weeks or months without any roofs over their heads. After getting paid most of the farmers are swindled by the thieves and money mongers from Harare so they are broke by the time they return,” said Candiero.

Economists have attributed the failure to improve growth points to the current and prevailing economic conditions. They believe that, to some extent, the government-induced, fast-track land redistribution process could have triggered underdevelopment. Over 3,000 mostly white commercial farmers were thrown off their land beginning in 2000.

“While most people are now informal traders, it is very difficult for the economy to grow and create more development,” Tendayi Muchemedza, an economist with mining consultancy Environmental Eagles, told IPS.

“The economy is sliding down – instead of growing forward we are shifting backwards. Farming has shifted from commercial to subsistence farming, and there are no industries and the small shops, which remain open at growth points, are general dealers. There is no growth in the country at large and so we cannot expect growth at the growth points,” added Muchemedza.