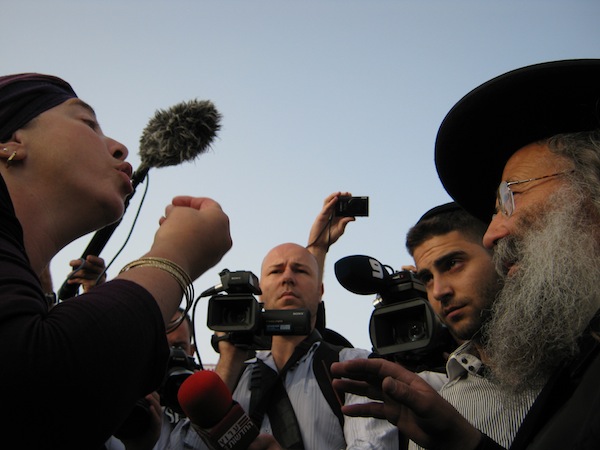 JERUSALEM, Jun 12 2013 (IPS) - The struggle for gender equality and Jewish pluralism took a highly symbolic turn on Sunday at the Western Wall, Judaism’s most revered site and emblem of unity, as a group of women known as “Women of the Wall” prayed legally and in a way they saw fit.

For 24 years, the Women of the Wall, a Jewish feminist group, have demanded the right to carry and read aloud the Holy Book of Judaism at the Western Wall (“Kotel”, in Hebrew) while wrapping themselves in prayer shawls, donning phylacteries and wearing skullcaps.

According to the Jewish Orthodox Law, only men may don the Tallith, the Tefilin and the Kippa and read the Torah aloud while praying during religious ceremonies. As such, the women’s demand is anathema to Jewish Orthodoxy, Israel’s prevailing stream of Judaism.

The conservatives, reformist, progressive and liberal movements with which the Women of the Wall are affiliated, though prominent in the United States, are a minority in Israel.

The Kotel’s esplanade on Sunday resembled a fortified battlefield, with two opposing camps deeply divided on religious duties and gender rights readying themselves for yet another showdown.

"It's a shame we're relegated to pray like lepers."
-- Ya'ara Nissan

Approximately 300 women, who intended to mark the first day of the Jewish month of Tamuz in full regalia, fought their way through a crowd of similar size of infuriated ultra-Orthodox men.

“These women want to tear Judaism apart. Secular Jews wouldn’t dare falsifying the word of God, but these women, they change Judaism from within,” warned Nahum Weiss, rebbe of a Talmudic school.

Hundreds of police officers – at least two per woman – were deployed between the two camps to prevent the violence that characterised the previous monthly prayer, when Yeshiva boys and seminary girls hurled garbage, diapers and eggs at the Women of the Wall.

This time, men let loose a flood of abusive invectives against the women: “Go pray with the Muslims!”; “Go home to America!”; and “You don’t belong here!”

Jenny Menashe, from the group Women for the Wall, the Women of the Wall’s Orthodox alter ego and whose motto is “preserving the sanctity of the wall”, called on fellow male coreligionists to “allow women to handle these women”.

Placards read, “You make up a new religion, built a new wall!” The group Women of the Wall responded with an Orthodox Hassidic hymn, “The whole world is a narrow bridge; above all, don’t be afraid.”

Policewomen escorted the women to the Kotel’s female section, where they were kept behind barriers to avoid further conflict with Orthodox worshippers. A prayer-like lamentation arouse from the male section to cover the women’s prayers. To practice their faith at the Kotel, men have at their disposal a space twice as large as the women’s.

“It’s a shame we’re relegated to pray like lepers,” deplored Ya’ara Nissan, “It shows what happen to women when they get out of the kitchen.”

Two months ago, as if abiding by Orthodox edicts, the police would arrest women for praying at the Kotel in their own way. But on Apr. 25, the Women of the Wall won a historic victory in the long struggle for recognition of their practises and against the Orthodox authorities in charge of prayer rules at the holy site.

Judging that their unorthodox behaviour does not disturb the peace and that, on the contrary, ultra-Orthodox Jews are those who cause disorder, the Jerusalem District Court ruled that the Women of the Wall could pray at the wall.

Judge Moshe Sobel, an Orthodox Jew himself, wrote in his decision that the Women of the Wall’s practices constitute neither a violation of “local custom” nor a provocation.

The court also ruled out police interpretations of a previous Supreme Court ruling from 2003, stating that women are neither forbidden from holding their own prayer services at the Kotel nor required instead to congregate at the nearby Robinson’s Arch.

“Today the Women of the Wall liberated the Western Wall for the entire Jewish people,” clamoured Anat Hoffman, the organisation’s chairwoman.

In response to the court ruling, Western Wall Rabbi Shmuel Rabinowitz protested, “I implore the authorities as well as the silent majority who care deeply for the Kotel to prevent extremists from turning it into a site of antagonism between brothers.”

On Sunday, the ultra-Orthodox rabbis called for married and seasoned men to demonstrate their opposition to the Women of the Wall, instructing the hot-tempered single pupils to remain in their Talmudic schools, so as not to turn the protest into yet another unmannerly and disgraceful brawl.

But instead of the thousands expected, only hundreds answered the call.

By and large, the prayer service was peaceful. A few eggs landed at the feet of the Women of the Wall’s male supporters. “They planned a demonstration of force and demonstrated their weakness,” noted one.

“They’re getting used to us,” Hoffman observed cautiously. “The Kotel is a place for all communities and streams of Judaism,” declared spokeswoman Shira Preuce, adding, “The Orthodox Rabbinate fears women empowerment, fears changes.”

The political landscape is now such that the Orthodox lobby at the Knesset is unusually weak, and ultra-Orthodox legislators sit in the opposition with liberal, progressive and Arab parties. The relationship between state and synagogue is now shifting in favour of more progressive Jewish currents.

A draft conscription law could break the ultra-orthodox Jews’ longstanding exemption from serving in the Israeli army, while non-Orthodox rabbis now receive state salaries and Jewish Israelis are allowed to marry under any rabbinical council within Israel.