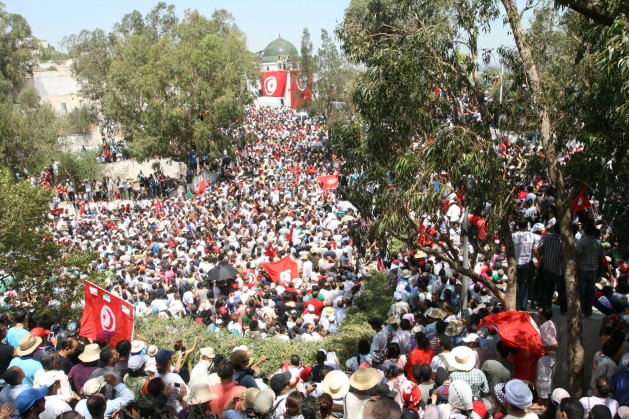 TUNIS, Jul 31 2013 (IPS) - As political divisions threaten to destabilise the national transition process in Tunisia, Prime Minister Ali Laarayedh has set deadlines for finalising the new constitution and holding elections. Not everyone is convinced these will be met.

In a televised speech Monday appealing for a calm resolution of the political crisis, Laaryedh stated: “Dissolution of the National Constituent Assembly (NCA) and the government will not help the situation…There are opportunists who are trying to take advantage of this situation. Dialogue shouldn’t be in the streets or through violence but at the table discussing strategies and plans.”

His speech was a show of strength following a wave of protests that have hit the country since the assassination of opposition leader Mohamed Brahmi on Thursday last week, the second such assassination in five months. Early shocked reactions led to protests against the government, with many chanting ‘dégage!’ (get out!), a slogan that was used during the revolution.

It was expected that the constitution would be finalised within a year followed by elections but almost two years on it is still not finished.

The opposition is already unhappy with the government’s progress with the transitional process. It was expected that the constitution would be finalised within a year followed by elections but almost two years on it is still not finished. The government insists it is taking time to get it right, but critics argue it is clinging to power.

Laarayedh now says the constitution will be finalised by the end of August and that election laws will be written by Oct. 23, the date the government came to power in 2011. He announced that elections will be held on Dec. 17, the anniversary of the day three years ago when street vendor Mohamed Bouazizi set himself alight, igniting the revolution in Tunisia and triggering the Arab Spring.

However Amine Ghali, programme director at the Kawakibi Democracy Centre, an international civil society organisation based in Tunis, told IPS: “There is no possibility of meeting these deadlines. For the election laws and elections we need six to eight months. Perhaps the constitution could be finished by the end of August but only if there is a genuine discussion to improve the current draft, taking into account the many shortfalls it contains.”

Anti-government protestors are also angry that not enough is being done to stop extremist Islamic groups or to secure national borders. The country was plunged into mourning once more Monday when nine Tunisian soldiers were killed and their bodies mutilated in a terrorist attack close to the Algerian border.

Following Brahmi’s funeral on Saturday both pro- and anti- government protestors demonstrated in the square in front of the NCA in Tunis. This led to clashes, and police fired tear gas into the crowds. Protests have been taking place across the country.

Reem Selmi came with her husband and 12-year-old daughter to support the government in an earlier protest on Sunday. “People want the government to solve all the problems straightaway but it’s not possible just like that,” she said. She believes the government, which is dominated by the moderate Islamic party Ennahda, is on the right path.

“This government lets everybody live the life that they want. Under [former dictator] Ben Ali we were not free to practise our religion but now we can. We are Muslims and we love Islam. Islam does not mean terrorism.”

Yet there is a danger that political divisions are being strengthened down religious lines.

“I used to want Ben Ali out because he wouldn’t allow Muslims to grow long beards or women to wear the niqab, but now I think I know why he did this,” Maher Gatri on the anti-government side of the square told IPS.

“Today you can look at a person and just by his clothes or appearance you can tell which party they support. We are all Tunisians and Muslims but now we are separating into two sides. This is very sad. When I am near the government supporters I feel afraid. I am a Muslim but now I am in fear of my own religion.”

The government is also facing a crisis amongst members of the NCA charged with writing the constitution. Several have withdrawn from their positions over the last few days.

“Fifty-nine [out of 217] members have withdrawn but we want them to come back,” Osama al Saghir, NCA member from the Ennahda party tells IPS. “If we find a solution we will complete the constitution on time. If they choose not to come back they will have to resign and be replaced.”

There are claims that the government itself, a coalition of three parties, the Congress for the Republic (CPR), Ettakatol, and the dominant party Ennahda, may be fragmenting.

Bannour Mohamed, spokesperson for Ettakatol, reportedly told local radio station Jawhara FM, “If Ennahda and the CPR refuse the dissolution of the government, Ettakatol will withdraw from the troika.”

Al Saghir says this is not the case. “We continue to work together with Mustapha Ben Jaafar, Ettakatol’s secretary general and president of the NCA.”

Television images of the violence in Egypt serve as a stark warning to Tunisians of where the path a violent overthrow may lead.

In a paper entitled ‘Tunisia unlikely to go Egypt’s way’ Francis Ghilès, senior research fellow at the Barcelona Centre for Foreign Affairs (CIDOB) sets out three key differences between the Egyptian and Tunisian crises which offer hope for Tunisia: Tunisia’s army does not have a strong political role, its economic and unemployment problems are not as bad, and it has a strong and vocal civil society, he argues. Many Tunisians hope he is right.