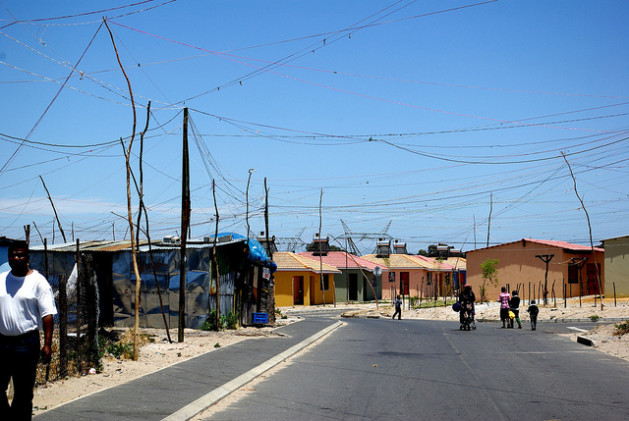 Analysts are concerned that there is a security risk in transferring power from the soon to built Inga Dam in the Democratic Republic of Congo to South Africa. Pictured here is the city of Atlantis, on the outskirts of Cape Town South Africa, where people access power illegally. Credit: Lee Middleton/IPS

JOHANNESBURG/LUBUMBASHI, Aug 17 2013 (IPS) - There are big aspirations for Africa’s largest hydroelectric project, the Inga III that is set to be built in the Democratic Republic of Congo. But analysts are sceptical that such an ambitious project will ever be realised.

In May, Congolese Minister of Energy Bruno Kapandji made the announcement that the project was moving forward, adding that that Inga III would generate 4,800 megawatts (MW). The project will be constructed on the site of two existing dams on the lower Congo River in western DRC. It will be built on one of the largest waterfalls in the world, the Inga Falls, where the Congo River drops almost a hundred metres and flows at an enormous speed of 43 cubic metres per second. South Africa is both a partner in and the major client of the project.

Independent economist Ian Cruickshanks praised the vision behind Inga III, but expressed concerns about whether it would ever go ahead.

“The potential of this project is enormous and exciting and could make a huge difference to sub-Saharan Africa,” he told IPS.

“It could provide cheaper and cleaner electricity than is currently produced in coal-fired power stations. The river is there – you need to put in the turbines and to build the power lines.”

Inga III will require 12 billion dollars in total, with dam construction costs estimated at 8.5 billion dollars of this amount. The project will take six years to complete.

As a first step, the World Bank and the African Development Bank (AfDB) have to approve a 63-million-dollar technical assistance package for the project. According to the World Bank information sheets on the project, 43 million dollars will come from its concessionary funding arm, the International Development Association, and the remainder would come from the AfDB.

However, Cruickshanks cautioned that it will be a challenge to transport electricity over the long distance to South Africa. “My one concern follows experiences of the Cahora Bassa Dam project on the Zambezi River in Mozambique. [It] generates electricity, but the transmission to customers in South Africa isn’t efficient,” Cruickshanks said.

“Then there is a huge security problem of giant power lines [running] across the DRC, which is at war with itself.”

According to the United Nations Refugee Agency, the security situation in eastern DRC has been precarious since July 2011.

Fresh fighting between M23, an armed group started by former Tutsi soldiers who mutinied in April 2012, the DRC army, and other local armed groups, has uprooted thousands more. Some 2.2 million people were displaced internally.

Independent engineer and commentator on energy issues Andrew Kenny told IPS that regional projects are essential for developing Africa’s electricity supply, which are key for development.

“Transmission lines linking different countries are vitally necessary. Since actual demand in most African countries is so small, many generating projects will provide more power than the whole country needs, and the excess should be passed on the neighbours in need,” he argued.

“Grand Inga is only possible if it is a regional project providing power to many other countries. Similarly with a large coal station that Botswana was considering.”

He echoed Cruckshanks concern about the instability in the DRC.

“At the moment investors would fear political and commercial risk from an unstable government in a country wracked with bloody conflict.

“There would also be risks in payments for the electricity, operation and maintenance of the hydro plants, sabotage, confiscation, nationalisation and inability to repay debt. They would also fear risk from surrounding countries owning transmission lines: risks of confiscation, imposition of very high tariffs and incompetent maintenance.”

Senior research and strategy analyst at Frontier Advisory, Simon Schaefer, told IPS that he shares Cruickshanks’ concerns that such an ambitious project would be possible in a troubled part of Africa.

“I think the Inga III project has to be seen in the greater context of the political situation of the country and the region,” he said. “The DRC is very fragmented internally. It is questionable whether the government in Kinshasa actually exercises effective control/power of all parts of the country.”

He also noted that the project has been on the cards for many years. However, he suggested that the size of the project, the complex political landscape and problems of the DRC and the region were key obstacles to its implementation.

“The political situation in the DRC is instable and the country has often been described as a failed state. Other major problems in the DRC are rampant corruption and the lack of credible institutions. All these factors are not the ideal starting point for multi-billion dollar project with a long investment horizon,” he said.

However, he did emphasise the benefits of collaboration between African nations in tackling power challenges – an issue which was highlighted by U.S. President Barak Obama on his recent trip to Africa, when he pledged billions of dollars in U.S. funding to support energy infrastructure in Africa.

“This would allow countries to share the financial burden of the project and ensure absorption of the generated electricity. South Africa’s commitment to purchase a set amount of electricity from the DRC is a first step to increased integration in the power sector. While the key objective of the DRC may be the generation of revenues and job creation from the construction of the dam, the country has to be realistic about the off-take of power by countries in the region.”