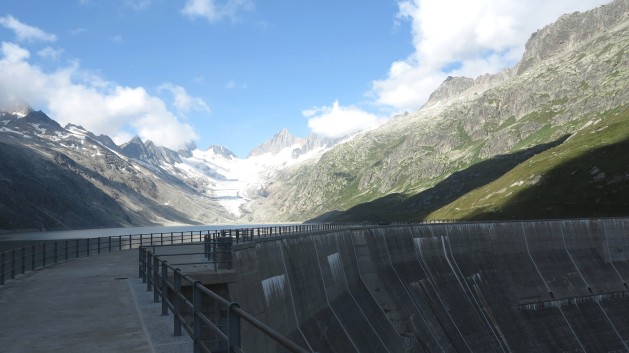 One of several water dams on Grimsel Pass in the Swiss Alps. Hydropower used to be profitable, but now revenues have shrunk drastically. Credit: Ray Smith/IPS.

LUCERNE, Switzerland, Aug 28 2013 (IPS) - Water power is the backbone of Alpine countries’ energy supply. Despite its important role in Europe’s energy shift, further development of hydroelectric infrastructure in Austria and Switzerland is on hold.

On sunny, windy summer days in Germany, when millions of solar panels soak up the sun and wind turbines run at full speed, the German electricity network can’t cope with the overcapacity. Especially on Sundays, production often exceeds demand. The result is low prices, at times even negative ones; which means customers get paid for buying electricity.

Europe’s energy market is liberalised. What happens in Germany affects all its neighbours. Swiss hydropower stations are unable to compete under these conditions. The heyday of Swiss water power is over.

The heyday of Swiss water power is over.

In the light of this market environment, the biggest Swiss energy producers Alpiq, Axpo, BKW and Repower are less willing to invest in optimising and enlarging their infrastructure. Repower has announced a 35 percent cut in investments in the next 10 to 15 years.

Andreas Meyer, media person at Alpiq, told IPS that the massive subsidies for renewable energy have destabilised the market, putting in question the profitability of hydro and thermal power stations and blocking further investments. Currently, Alpiq runs a divestment programme. The company is worried that the price deterioration will continue.

Further development potential of Swiss water power is disputed. While the government estimated four to five terrawatt hours, the World Wildlife Fund assessed only 1.5 terrawatt hours. In any case, the potential is quite low.

Nevertheless, Switzerland subsidises small hydropower stations with a capacity of less than 10 megawatt massively, irrespective of their efficiency and the ecological damage they may cause.

For once, conservationists and the leading energy suppliers take a common stand on the Swiss subsidy model that favours small hydropower projects. “Isn’t it absurd that subsidising new renewable energy leads to a situation where even other systemic technologies need to be subsidised?” says Werner Steinmann, spokesperson for Repower.

The boom of solar and wind energy in Europe has lead to increased demand for electricity storage, as both energy sources are unsteady. Germany, Switzerland and Austria agreed last year to increase the capacities of pumped-storage hydropower plants in a concerted effort.

Several such plants are currently being constructed in the Swiss Alps. Whether these investments will finally pay off is more uncertain then ever.

Within the energy sector, that demand is disputed however. Axpo’s media person Daniela Biedermann says that it can’t be a solution to solve the mistakes of the current subsidies regulation with additional subventions. “We need to discuss how to implement the new renewable energies into a market-oriented system instead,” she told IPS.

The Swiss Association for Water Management (SWV), which represents the industry, demands that subsidies for hydropower may no longer be limited to small projects and that instead the relevant criteria would have to be efficiency, an aspect that the current subsidy system completely ignores. The SWV wants promotion for those projects that produce the most electricity per subsidy-dollar.

Conservationists are less happy about the various further demands voiced by the water power industry though. In the name of “national interest”, water power companies have been trying to tap even nationally protected waters. Instead of using even the last drop of water for electricity production, the WWF prefers to increase energy efficiency.

Just across the border, the Austrian hydropower industry struggles with similar problems. Currently, about 60 percent of the country’s electricity supply is covered by domestic water power. The industry once intended to increase its capacity by seven terrawatt hours until 2020.

“We surely won’t be able to meet up with our expectations,” says Ernst Brandstetter, spokesperson of Oesterreichs Energie, which represents the interests of the Austrian electricity industry. According to Brandstetter, only an additional four terrawatt hours until 2025 are realistic. “Unfortunately, many projects are on hold. The industry is about five years behind its development plans.”

Brandstetter explains that regarding water power stations, the current market situation is characterised by acute insecurity. “Many planned projects are economically no longer justifiable.” Oesterreichs Energie doesn’t demand subsidies. It however wants a more investor-friendly environment.

“Most worrying is that even storage projects are about to become unprofitable,” Brandstetter adds. “Along with the electricity networks, pumped storage hydropower plants are the most important enablers of a renewable energy future.”

For Switzerland’s and Austria’s hydro power industry, much depends on developments at the European Union. On that level, a consultation on Environmental and Energy Aid Guidelines 2014-2020 is currently under way. Whether or not Alpine hydropower may profit from the new guidelines will be seen next spring.