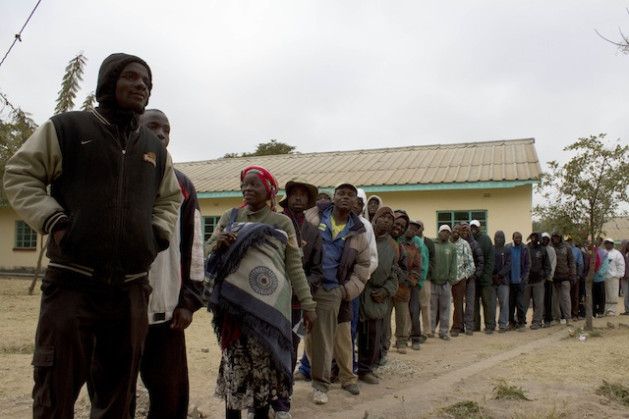 Zimbabweans voted on Jul. 31 for a new government and president. But local opposition parties and analysts are questioning credibility of the vote and President Robert Mugabe’s victory. Credit: Jeffrey Moyo/IPS

Professor Geoff Feltoe’s resignation Tuesday came soon after that of another commissioner, Mkhululi Nyathi. Nyathi resigned on Jul. 31, the day of the vote, over the way the elections had been conducted. Nyathi told the media he had resigned because the ZEC had failed to ensure that voting was legitimate.

Feltoe did not give a reason for his resignation on Tuesday, but a leading official from the opposition party, the Movement for Democratic Change-Tsvangirai (MDC-T), told IPS that he had most likely resigned over the credibility of the vote.

“There is definitely nothing to celebrate with Mugabe’s return to power, save for the perpetuity of economic suffering and political instability." -- political analyst Malvern Tigere

“The fact that Professor Feltoe resigned from the ZEC soon after this sham election renders the organisation’s credibility questionable, for why would he leave at that point? Why did he not depart before? It’s clear he didn’t want to be implicated in the rot he saw [at the] ZEC during the election,” the official said speaking on the condition of anonymity.

Mugabe won 61 percent of the 3.4 million votes cast on Jul. 31, while Prime Minister Morgan Tsvangirai, head of the MDC-T, won 34 percent. This sparked a litany of questions from analysts and rights activists about how the 89-year-old leader could have retained favour with the voters after he presided over Zimbabwe’s record-high inflation of 293 million percent in 2008.

Opposition parties report that during the polling thousands of voters were turned away, and that the voters’ roll, which was meant to be available to political parties for verification prior to the election, is still not available. There are also reports of intimidation by alleged members of Mugabe’s Zimbabwe Africa National Union-Patriotic Front (Zanu–PF). However, there were no reports of violence during the election.

“As ERC, we remain extremely worried about the irregularities cited in the elections. Zimbabwe’s elections did not meet international standards,” Chimhini told IPS. The United States rejected the vote.

“Modern day democracy is not judged by the absence of violence, but by upholding all factors leading to an uncontested election result,” added Chimhini.

The MDC-T and other opposition parties are currently preparing a dossier, which sources say contains proof that Zanu–PF rigged the elections.

“We are pursuing the legal, diplomatic and political routes. We are compiling the dossier on the irregularities of the polls before, during and after the elections, which we will then hand over to the Constitutional Court prior to taking our case to the Southern African Development Community (SADC), if we may not get a fair court hearing here,” MDC-T spokesperson Douglas Mwonzora told IPS.

Mwonzora said that according to the constitution, the president-elect would only be sworn in after all electoral challenges had been resolved: these must be completed within 14 days of the polls.

But political analyst Masimba Kuchera said that the complaint by the MDC-T and other parties was not going to change anything.

“The MDC formations are challenging the election results for record sake and their efforts won’t change the fact that Mugabe is now the president. Neither SADC nor the courts may overturn that reality,” Kuchera told IPS.

Cleto Manjova, programme officer for the Heal Zimbabwe Trust, a local rights group, said overturning the controversial election outcome in favour of the MDC-T would be difficult to achieve through any means.

“In their reports, the African Union and SADC found electoral irregularities pertaining to Zimbabwe’s elections, but they are less likely to call for fresh polls. They will leave Zimbabweans to act,” Manjova said.

“Personally, I’m finished. My hopes are gone. I looked forward to a new era, but [Mugabe] has [cheated] his way through this election and where do we go now?”

“Mugabe has returned to power and his victory means much bigger things are set to happen for us as we benefit from [his] economic policies,” Jacha told IPS.

However, some political analysts here have told IPS that Zimbabwe was heading for the worst political and economic crisis yet under Mugabe’s leadership.

“There is definitely nothing to celebrate with Mugabe’s return to power, save for the perpetuity of economic suffering and political instability. Zanu-PF itself is set for another war against itself to find who shall replace its aged leader. There are going to be assassinations in Zanu-PF as hardliners position themselves to succeed the aged leader,” independent political analyst Malvern Tigere told IPS.

Claris Madhuku, director for Platform for Youth Development, a democracy lobby group, said Mugabe did not care in which direction he was driving the country.

“Whether he heads for the mountains or not, Mugabe does not care so long as he managed to retain power. He’ll remain adamant that the people of Zimbabwe have spoken … The attack on him will gradually fade since sanctions against him failed to destroy his political career, and arguably made him more popular. He still has the capacity to outwit his rivals,” Madhuku told IPS.

“Mugabe’s victory here [poses] a real danger in terms of democratic gains made during the tenure of the unity government,” Lewanika told IPS. After the 2008 election violence, the Zanu-PF government entered into a coalition arrangement with the MDC-T and MDC led by Welshman Ncube. The unity government came to an end with the Jul. 31 election.

Tension remains in most townships. Marylyn Chikate, a widow and mother of six from Harare’s Mbare Township suburb, says she was evicted from her home in the now Zanu-PF-run parliamentary constituency after militias linked to Zanu-PF accused her of voting for the opposition.

“Memories of [having] lost my husband in the 2008 political violence have just been re-ignited as now Zanu-PF militias have driven me and my children from my home. This just tells me we are headed for more reprisals,” Chikate told IPS.

But it remains uncertain whether Zimbabweans will rise up to contest the credibility of the vote.