After more than four decades of highly concentrated electricity generation, Brazil is leaving behind this worn-out model and moving towards distributed and decentralised power production. 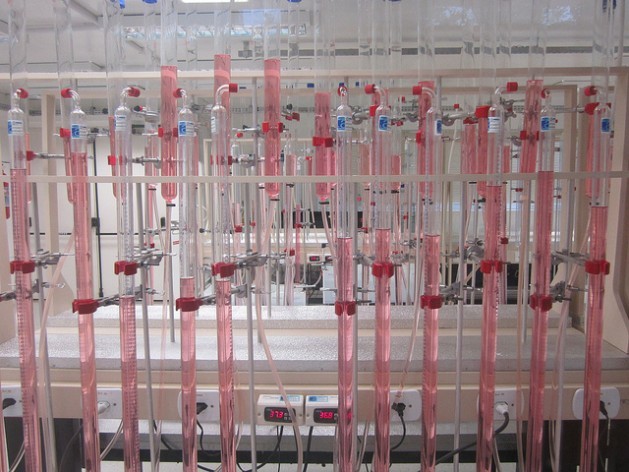 Test tubes in the biogas laboratory that Itaipú has established in its technology park in search of greater efficiency in the production and use of this energy source. Credit: Mario Osava/IPS

FOZ DO IGUAÇU, Brazil , Sep 3 2013 (IPS) - The massive Itaipú hydroelectric dam, shared by Brazil and Paraguay, has now become a model for the micro-scale production of an energy source that is not only clean, but also helps to reduce pollution and promote local development: biogas.

Preventing the pollution of the reservoir with organic waste in order to preserve the energy-generating efficiency of the hydroelectric plant is a key goal for Itaipú. Its main socio-environmental programme, Cultivating Good Water, comprises 65 actions for the protection of the Paraná River Basin 3, the area affected by the dam on the Brazilian side, in the western part of the state of Paraná.

Producing biogas from animal manure fulfils this pollution-fighting function. But it also reduces emissions of greenhouse gases and provides a source of income for local farmers, explained Cícero Bley, superintendent of Renewable Energies at Itaipú Binacional, in an interview with Tierramérica.

The prospect of incorporating the energy business into his farming activity was an exciting one for cattle farmer Gedson Vargas. His enthusiasm probably played a decisive role in his rise to the presidency of the Coperbiogás cooperative, despite the fact that he was a relative newcomer among the traditional inhabitants of the Ajuricaba River valley, many of whom are descendents of German immigrants.

In 2007, at the age of 51, and with three young children, Vargas realised a long-held dream by purchasing 17 hectares of land in the valley for the equivalent of around 100,000 dollars. “I have always lived in the countryside,” he noted, but he endured five years as a milk vendor in the city in order to save up the money to buy his plot of land.

“I started out with 12 borrowed cows, but I grew, and now I have 40, plus 12 calves,” he told Tierramérica. With these, he produces enough biogas for household consumption as well as a surplus supply. But he is limited by the small size of his current biodigester, a mere 10 cubic metres. He hopes to obtain a larger one through Itaipú, which might be one abandoned by a neighbour.

“It’s a lot of work, but it was the same before, since we had to clean the manure out of the stables,” he said. Now there are environmental benefits, the foul smell and mosquitoes are gone, and the river and a nearby lagoon are cleaner.

Moreover, after the biogas is extracted, what remains of the manure can be used as bio-fertiliser, “which improves the pasture land, and it’s free,” he remarked. The fact that he no longer needs to buy chemical fertilisers adds up to savings of around 150 dollars a month.

The only crop that Vargas grows is corn, on 10 hectares of his land, and he takes advantage of the entire plant, including the kernels, husks and stems, which he stores and uses to feed his cows during the Southern hemisphere winter. The recent purchase of a tractor is proof of how well business is going.

Not even the setbacks faced by the cooperative can dampen his enthusiasm. It all began in 2009 with the Agro-Energy Cooperative for Family Farmers in the Ajuricaba River Basin, later formalised as Coperbiogás. There were originally 41 families involved, but eight dropped out or left the valley.

For more than a year everything has been ready to generate electricity at the biogas micro thermoelectric plant, built with donations from Itaipú on land allocated by the municipal government of Marechal Cândido Rondon. The sale of electricity will provide additional income for the cooperative’s 33 member families.

The micro power plant has the necessary inputs from the family farm biodigesters connected to it by pipelines, but its operation is awaiting a decision from Compañía Paranaense de Energía (COPEL), the public power company in the state of Paraná that would purchase and distribute the electricity.

An alternative is direct sale to an agricultural cooperative, Cooperativa Agroindustrial Copagril, in Marechal Cândido Rondon, which has expressed interest.

But the “lungs” of the micro power plant, the large plastic tank that stores the biogas, already has leaks, as evidenced by the foul odour. It will need to be replaced with a more resistant and larger tank.

In addition, it will be necessary to install 1,200 metres of pipes and ensure a regular supply as well as reserves. The investment required is greater than what the cooperative can afford, Vargas acknowledged.

Technicians from Itaipú estimate that the cooperative members have a combined total of 1,000 cows and 3,000 pigs. The resulting 15,800 cubic metres of manure annually would generate 266,600 cubic metres of biogas and 445,000 kilowatt-hours of electricity, enough to supply 2,200 households.

For now, Coperbiogás offers the services of a small grain dryer, which uses biogas to generate hot air flows.

The Ajuricaba initiative plays a key role as a model for family farmers, who must work as a group in order to make an energy-producing enterprise like this feasible. The Uruguayan public power utility, for example, as already decided to replicate the project in its own country.

The experience could also be extended throughout the western region of Paraná itself, where 80 percent of rural landholdings cover at least 50 hectares, and there are 26,000 family farmers and significant agro-industrial production of cows, pigs and poultry, said Bley, an agronomist and recognised expert on alternative energy.

But the pioneer in the commercial production of biogas is a medium-sized enterprise. Granja Colombari, a farm with around 4,000 pigs in the municipality of São Miguel do Iguaçu, has been selling biogas electricity to COPEL since 2009.

Other biogas-powered thermoelectric plant projects are also underway, such as one on a large dairy farm and three being developed by a large commercial agricultural cooperative.

For more than four decades, electric power generation has been highly concentrated in the pursuit of greater efficiency, and Itaipú is a prime example of this. But this model has run its course, leading to the need for the incorporation of distributed and decentralised generation. Micro power generators will play an important role, because in addition to producing energy, they also contribute to local development and environmental improvement, stressed Bley.

The decision made by Itaipú to pursue this path “is not a publicity stunt, but rather the result of a deep conviction,” he said. That is why last year, in partnership with the United Nations Industrial Development Organisation (UNIDO), it created the International Centre for Renewable Energies, the first in the world with an emphasis on biogas, where Bley is the general director.

Rural economic activity is boosted with the income from energy generation and the “biogas economy”, including its supply, service and knowledge chains, but urban sanitation systems can also make use of wastewater, a significant source of gas, he added.

The biogas initiative in Ajuricaba, for example, has helped to foster a local small industry. Its blue biodigesters and black storage tanks, which can be seen next to the stables, are manufactured by BioKohler, a company incubated by Itaipú.

The new entrepreneurs embarked on this innovative venture 10 years ago on their father’s milk farm, in the same municipality of Marechal Cândido Rondon, Paulo Kohler told Tierramérica. They began by producing plastic biodigesters, and then his brother Pedro invented the fibreglass digesters that are used in Ajuricaba in three different sizes, ranging from 10 to 40 cubic metres.

Now they are working on producing concrete biodigesters, which are larger and more expensive, adapting stoves for biogas use, and improving the storage tanks. “We are just surviving,” but the biogas market is promising, said Paulo.