WASHINGTON, Sep 24 2013 (IPS) - A contentious global agreement on how to limit greenhouse gas emissions from the global airline industry will be at the top of the agenda over the next two weeks at an international summit, potentially solidifying details that have yet to emerge after more than a decade and a half of talks. 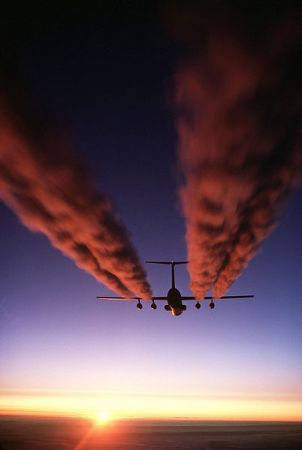 While civil society and the aviation industry have often been far apart in their views on the optimal strength and framework for the new regulations, prominent voices on both sides are now urging governments to set a clear timetable at talks that began Tuesday in Montreal.

Some say the negotiations, under the 191-member International Civil Aviation Organisation (ICAO), a U.N. body, will offer a last, best opportunity to cut back on the sector’s globally significant greenhouse emissions while offering a fillip to broader multilateral efforts at combating climate change. Others are warning that failure to reach an agreement at the summit, which runs through Oct. 4, could result in an international trade war.

“The need for immediate reductions has never been greater, and ICAO delegates have a great chance to seek rapid emissions reductions,” Brad Schallert, programme officer for climate change at the World Wildlife Fund (WWF), a conservation and advocacy group, told IPS from sidelines of the talks. “Yet currently, both NGOs and the industry are hoping for stronger language than what is currently in the draft agreement.”

The draft in question, which was unveiled in early September, came out of a 10-month process convened to try to move along the broader negotiations.

In the aftermath of the passage of the Kyoto Protocol, a decade and a half ago, the United Nations mandated ICAO to evolve a mechanism by which to cut down the aviation sector’s greenhouse gas emissions. Since that time, the talks have progressed slowly when they’ve progressed at all.

In January 2012, however, the European Union put in place a far-reaching agreement to require both inbound and outbound airplanes to purchase “carbon credits” to offset their emissions. That led to virulent pushback from certain countries – led by the United States but including developing countries warning that their nascent but booming airline industries shouldn’t be forced to pay for decades’ of high pollution levels coming from developed countries.

The response temporarily halted the European Union’s scheme, though failure to come to an agreement at the current ICAO could lead it to reinstate the plan. Several officials have recently warned that doing so could lead to a trade war.

Given both the type of fuel it burns and the altitude at which its planes operate, in addition to its massive growth in recent decades, the airline industry is one of the single largest contributors of greenhouse gases. Analysts suggest that if it were a country, the industry would be the seventh-largest global polluter.

Currently those emissions contribute between 2 and 3 percent of total greenhouse gases. Yet there is broad agreement that these levels are set to increase dramatically in coming years.

In an attempt to prod the talks along and to deal with the sudden existence of the E.U. regional scheme, in November a high-level committee was tasked with formulating a compromise agreement. This committee included strong representation from the countries sceptical of the E.U. plan.

Yet to the frustration of both environmentalists and many within the airline industry, the draft states only that it “decides to develop” a global market-based mechanism to limit aviation emissions.

“The view is that it’s problematic that the agreement says it will develop, not that it will adopt, a global mechanism – the idea that there will simply be a recommendation isn’t good enough for either the NGOs or the industry,” Schallert says.

“Both the airlines and the manufacturers work on 30- to 40-year timescales, so they need signals that give them certainty. For both groups, the benefits of global measures are that they result in fewer market distortions.”

Further, a relatively speeded-up timetable is important for the industry, which is labouring under its own self-imposed schedule for cleaning up the sector.

In a landmark resolution in 2010, the International Air Transport Association (IATA) – representing 84 percent of all air traffic – agreed to be “carbon neutral” by 2020. This included a decision to impose an annual fuel-efficiency improvement of 1.5 percent until 2020 and a 50 percent reduction in emissions (under 2005 levels) by 2050.

At an annual meeting in June, IATA members reiterated these goals while also calling on governments to agree to the creation of a single global mechanism to limit aviation-related emissions.

“Governments now need to play their part by agreeing a package of actions, including a global market-based measure, to help reduce emissions even further … and show climate change leadership.”

Regardless of what exact timeframe is decided upon in Montreal – in the event that any agreement is arrived at – another and more controversial issue remains: what, if anything, to do until a global mechanism goes into effect. It is here that the European Union’s scheme remains both a motivator and an obstacle for ICAO negotiators.

“We are supportive of provisions in the draft resolution that will go before the ICAO Assembly for ICAO to do the work on [a global market-based] scheme,” Nancy Young, vice-president of environmental affairs for Airlines For America, a U.S.-based association, told IPS.

“In the meantime, we oppose the application of country-based or regional market-based measures to international aviation without the consent of the country of an airline’s registry.”

Yet under new language in the ICAO draft agreement, states would indeed be able to institute emissions regulations on flights to or from other countries “prior to the implementation of a global … scheme”. In a turnaround, however, the E.U. permits would cover emissions only within E.U. airspace, rather than applying to the entire flight as initially required.

Initial reports suggest that the European negotiators are amendable to such a change, though any new language would need approval from the European Parliament.

“If that is the case, then we have reason for optimism that we’re moving away from the path toward confrontation,” Steve Brown, chief operating officer at the National Business Aviation Association, told IPS in a statement, “and instead may be headed toward a new era of global cooperation on climate change.”