Where a Moustache Can Mean Life or Death 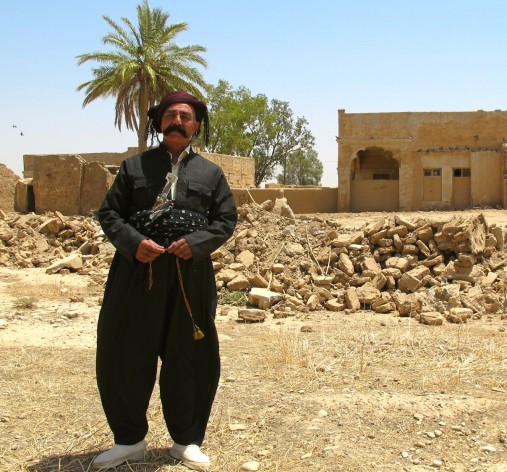 A villager in the partially destroyed village of Ali Saray in Iraq. Credit: Karlos Zurutuza/IPS.

ALI SARAY, Iraq, Sep 7 2013 (IPS) - “The soul needs to reincarnate a thousand times before becoming one with god,” says Rajab Assy Karim from Ali Saray, 190 kilometres north of Baghdad. Iraq is full of “shortcuts” to the ultimate, and several seem to pass through this tiny desert village.

The few hundred people living in the adobe houses of Ali Saray are all Kakais, followers of an ancient pre-Islamic creed whose mere survival in this region in the 21st century is a miracle.

Karim knows this, and devotes most of his spare time to collecting books for the only library among the 12 Kakai villages clustered in this region.

“We are halfway between Tikrit – Saddam Hussein’s hometown and a stronghold of his supporters – and the Kurdish Autonomous Region of Iraq,” says Karim. “The area is overrun by terrorists and we make one of their easiest targets.”

“We live in the Middle East, where there is no democracy, no freedom of speech, where there are no rights..."

The rubble of the 13 houses destroyed in just this village this year bears witness to the violence local residents are subjected to. It is the price to pay for being Kurdish and “pagan” in one of Iraq’s most volatile areas.

Along with the Yezidis, another-pre-Islamic following, Kakais are said to have kept an original faith among Kurds. Kakaism is said to have derived from the Kurdish word Kaka (“elder brother”).

Kakais are reputed to be secretive about their beliefs. “They often accuse us of not revealing details about our faith but it is just a measure to protect ourselves from a hostile environment,” Jassim Rashim Shawzan, the first and only Kakai judge in Iraq, tells IPS.

Shawzan says his people are originally from the Kurdish mountains of Iran near the city Kermansha, 400 kilometres southwest of Tehran. The area is dotted with Kakai spiritual shrines. It is where the only existing volume of the Zanur”, the sacred book of the Kakais, is kept.

After centuries of living among their Muslim neighbours, Kakais have adopted taboos such as not eating pork. But they still stand out.

Most Kakais are easily recognised by the often extreme moustaches they grow. Under Islamic practice, a moustache must be kept short and trimmed.

Shawzan also talks about a fasting period but, unlike the Muslim holy month, it lasts three days.

The judge says that post-Saddam Iraq is still far from being a country where the minorities’ constitutional rights are guaranteed.

“Saddam took away many of our lands and villages to relocate Arab families from other parts of the country. Since 2003 hundreds of us have been killed by extremists, and many were forced to move.”

The United Kingdom-based Minorities Right Group International estimates the number of Kakais in Iraq at 200,000. In a report in 2011 it condemned “threats, kidnappings and assassinations” in Kakai area. Some local Muslim religious leaders have reportedly ordered a boycott of “shops run by infidels.”

Today most Kakais agree that their security would improve were their villages placed legally under the Kurdish Autonomous Region of Iraq. Violence in this region is low compared to the rest of the country.

Sirwan mounts guard at a checkpoint at the entrance of Ali Saray. He wears black sunglasses and a Kevlar helmet. His thick moustache gives him away as a Kakai.

“If we finally get the chance to conduct a referendum whether we should be under the control of Erbil (administrative capital of Iraqi Kurdistan 310 kilometres north of Baghdad) we will vote favourably, and en masse.”

The soldier says a plebiscite had been scheduled in 2007 to decide the legal status of the “disputed areas” between Erbil and Baghdad. The referendum remains postponed until measures to counter-balance the Arabisation campaigns of Saddam Hussein are taken.

Writer Falakadin Kakaye, who stood as a bridge between the Kakais and the Iraqi Kurdish administration, died last month. He was twice elected minister of culture in the Kurdish executive before taking charge of relations between Erbil and Ankara.

Kakaye left behind a country facing levels of violence not seen since 2008. More than 1,000 Iraqis were killed in attacks in July.

Others are making an effort to preserve the rights of the Kakais, and their culture. Saad Salloum, chief editor of the Masarat magazine is struggling to document the diversity of Iraq before it disappears.

“Since 2003, we Iraqis have rediscovered our plurality,” says Salloum. “But far from accepting it as an enriching sign of our own identity, today we fear the neighbour more than any missile or weapon of mass destruction.”