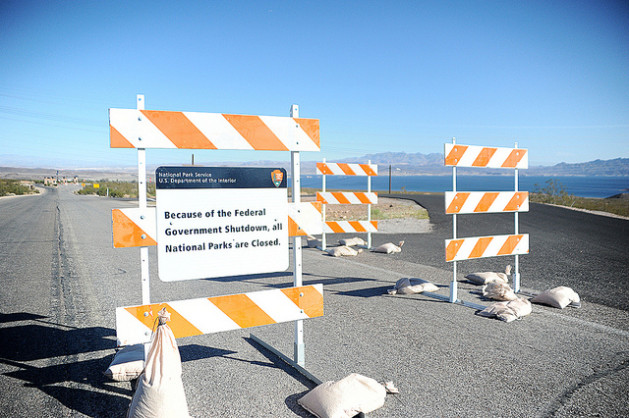 WASHINGTON, Oct 4 2013 (IPS) - Frustration is mounting with elected representatives here on the fourth day of a U.S. government shutdown that has left nearly 800,000 federal workers temporarily out of work, and advocates across the political spectrum are working to get their voices heard.

Others are working to strengthen the voices of the country’s citizens.

"The perception is that government is driven by special interests and that it doesn’t act according to common sense.” -- Steven Kull

Already the shutdown is likely to further decrease the U.S. public’s already historically low trust in their government. Recent polls show that 85 percent of Americans believe that members of Congress are more interested in serving special interest groups than the common good.

Just nine percent of respondents believed that Congress is serving the “American people”. Perhaps more worryingly, 75 percent of people in the United States are convinced that the country is currently headed in the wrong direction.

Out of such a situation, some here are starting to look at ways to foster change from beneath.

“What we’re trying to do is bring back to life the founding vision of our republic, that amidst all of our different factions, the American public can finally have a clear voice,” Steven Kull, the founder of a new organisation, Voice of the People, told IPS.

“The biggest problem is that the American people have lost confidence in the way that our government is operating. The perception is that government is driven by special interests and that it doesn’t act according to common sense.”

The new nonpartisan organisation launched Thursday, unveiling a plan to break the constant polarisation and gridlock that have come to characterise – and plague – Washington.

In launching its Campaign for what it’s calling a Citizen Cabinet Wednesday in Washington, Voice of the People brings together former members of Congress from both sides of the aisle to create a platform that will, hopefully, help citizens better connect with their elected officials.

“Recent research shows that Americans believe that a stronger voice of the people will help government break through this gridlock,” Kull says, noting that the shutdown offered a great opportunity for the launch. “Voice of the People is there to do just that.”

The idea behind the new organisation is to create a policymaking simulation with the U.S. citizenry sitting in the driver’s seat. Citizens from all over the country – drawn from nationwide sampling – will be invited to sit on a panel that will see them think as policymakers for 12 months.

The Cabinet, which will operate primarily as an online platform, will include as many as 120,000 people at one time. They will then be informed about the major issues under discussion by Congress.

“The problem today is what we call the ‘noise of democracy’,” Byron Dorgan, a former U.S. senator, said at the programme’s launch. “There is a deep reservoir of common sense around the country, but it is rarely ever heard in the middle of all the noise coming from big money.”

Indeed, recent polls by Voice of the People President Kull, a political psychologist who studies public opinion at the University of Maryland, show that there exists a “great collective intelligence” in the country, as Kull terms it.

The new initiative will enable tens of thousands of U.S. citizens a new way to speak directly with federal lawmakers.

“The Cabinet is not going to replace traditional tools of communication between the people and their representatives. It’s going to make it stronger and better informed,” Bill Frenzel, a former U.S. representative, says.

After they have been briefed on a range of opinions behind issues before Congress, the Cabinet will be asked to formulate its policy.

“What we’re trying to do here is ensure that people get the most reliable kind of information on key issues,” Martin Frost, another former U.S. representative, explains. “Right now, most of the information out there on the Internet is just factually wrong. We want to address that.”

After the Cabinet comes up with an opinion, Voice of the People will break down the results according to congressional districts and send the information on to members of Congress.

“Of course, this doesn’t mean that members of Congress will automatically vote following this data,” Frost says. “But the [Voice of the People] results will make them better informed.”

One of the challenges for the newly unveiled Voice of the People will be its criteria for drawing samples, deciding on the composition of its panels. Although the initiative seeks to involve the entire U.S. citizenry, there are obvious doubts as to whether the initiative’s samples will be able to include, for instance, non-registered voters.

Meanwhile, the Voice of the People organisers are also heading to Congress to look for legislative backing – and legitimacy – for a part of their new plan. “We’re currently working on getting Congress to pass legislation that would create a national academy for a Citizen Cabinet at the national level,” Kull told IPS.

At the same time, funding remains an important concern, as it does today throughout Washington. Thus far, the initiative has benefited from generous funds from private donors, including the Rockefeller Brothers Fund and the Circle Foundation, but major ongoing economic concerns here will undoubtedly prove challenging to additional fundraising.