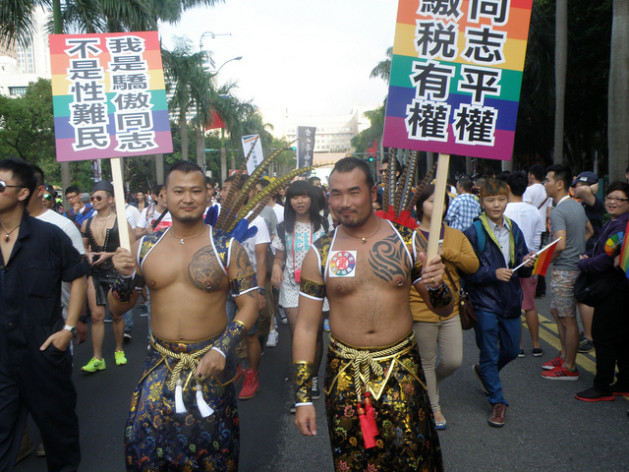 Two marchers in Taiwan`s 11th annual LGBT Pride March in Taipei City Oct. 26 affirm that ``I am proud to be gay; I`m not a sex refugee!`` Credit: Dennis Engbarth/IP

TAIPEI, Oct 30 2013 (IPS) - Taiwan could become the first Asian state to legalise same-sex and other “pluralistic“ forms of marriage if a wide-ranging package of changes to the civil code are approved by the national legislature.

On Oct. 25, Taiwan`s 112-member legislature referred a “marriage equality“ bill of revisions to the Civil Code introduced by 23 lawmakers of the main opposition Democratic Progressive Party to the Judicial Affairs Committee for review and possible first reading.

Taiwan offers one of Asia`s most progressive environments for lesbian, gay, bisexual and transgender (LGBT) rights as both male and female same-sex activity are legal. But same-sex couples are deprived of legal protections encoded in the Civil Code for traditional male-female married households.

Some same-sex couples have filed appeals in administrative courts to overturn the rejection of their applications for marriage registration. But Taiwan Alliance to Promote Civil Partnership Rights (TAPCPR) president Hsu Hsiu-wen told IPS that such legal actions “can only provide remedy for individual couples.

“What we need are lasting changes in the Civil Code to legalise same-sex marriages and civil partnerships in general,“ she said.

The current push follows two previous efforts by DPP lawmakers in 2003 and 2006 to introduce same-sex marriage bills that were blocked from the legislative agenda by the right-wing Chinese Nationalist Party (Kuomintang or KMT) majority.

During an Oct. 25 news conference at the legislature, DPP legislator Yu Mei-nu said the bill reflected both the guarantees of Taiwan`s constitution for equal rights for all citizens and the stipulations of the International Covenant on Civic and Political Rights and the International Covenant on Economic, Social and Cultural Rights, which became part of Taiwan law in December 2009.

Yu noted that 10 international human rights experts who reviewed Taiwan`s first state report on implementation of the covenants in February had described as “discriminatory“ the fact that “only heterosexual marriages are recognised but not same-sex marriages or cohabiting partnerships“ and recommended that “the Civil Code be amended to give legal recognition to the diversity of families in the country.”

The package involves changes to 82 articles of the Civil Code section on marriage and the family, most of which involve changing phrases such as “husband and wife“ to “spouse“ or “father and mother“ to “parents.“

She said the apparently semantic changes were “substantial“ because the wording “adopts a neutral method to express the key conditions of marriage and married spouses and relations between parents and children and affirm the same-sex marriage and marriage rights for persons with diverse sexual preferences.“

The draft bill also includes complementary revisions to articles regarding adoption and inheritance that would equalise rights among spouses and ban courts from basing custody decisions on gender, sexual preference, sexual identity or gender characteristics.

In the future, Yu said that lawmakers would introduce bills on “civil partnerships“ and “family systems,“ a set of draft rules which would aim to democratise family institutions.

DPP legislator Cheng Li-chun said “the government has an obligation to fulfill the constitutional and human rights of all people and not make such fulfilment contingent on public opinion.

“There is no reason why our citizens should be deprived of the right to marry their loved one simply because their loved one has the same sex or because of different sexual preferences,“ said Cheng.

Nevertheless, prospects for early passage are clouded. There appears to be little enthusiasm in the ruling KMT for the proposed “marriage equalisation“ revisions to the Civil Code.

KMT legislative caucus deputy secretary-general Chiang Hui-chen told IPS that “this bill will pass when the time is ripe.“ She added that “the reaction I received when I asked constituents was why are we spending time on an issue like that when there is a crisis on food safety?“

Nevertheless, opposition, especially from religious groups, remains strong. A petition issued by the Taiwan Family Alliance and claiming to have over 310,000 signatures called on citizens to “support the marriage values of `one man, one woman` and `one husband, one wife“` and to “oppose the bills for `same-sex marriage` and `pluralist families’,“ maintaining that the traditional pattern was the “foundation of family ethics and moral values.“

Yu acknowledged in an interview that “there will be a long road before this bill can be approved,“ but said the decision of the full legislature to refer the bill to committee “shows significant progress“ compared to the fate of the previous attempts, which failed to enter the legislative process.

Moreover, TAPCPR`s Hsu said a poll of 567 Taiwan adults conducted by the United Daily News Survey Centre in June showed that support for same-sex marriage had risen from 25 percent in 2003 to 53 percent, while opposition fell from 55 percent to 37 percent and the ranks of “undecided“ shrank from 20 percent to 10 percent.

Hsu said opponents who believed that the reforms would “destroy the family and the institution of marriage“ were mistaken and that the passage of the revisions would “help us prevent many meaningless tragedies.“

“Our goal is to institute a marriage or partnership system in which persons of any gender or sexual preference can register and live together with appropriate legal guarantees and obligations and human rights,“ Hsu said.

“We have found in our discussions all over Taiwan that people can accept diversity through discussion and dialogue,“ she added.

“We hope that the draft revisions can be approved into law, but I also believe that their value lies in our hope that this process can open room for democratic discussion and dialogue in our society about diversity in marriage and gender roles,“ Hsu told IPS.

The draft bill was accepted by Taiwan`s legislature for review the day before the country’s 11th annual colourful LGBT Pride demonstration, which attracted over 50,000 supporters from Taiwan as well as Japan, South Korea and other countries under the themes of “make LGBT visible“ and “struggle together.“

“We want to show support for those who are still suffering or being discriminated against because of their sexual preferences and expressions,“ stated spokesman Albert Yang.