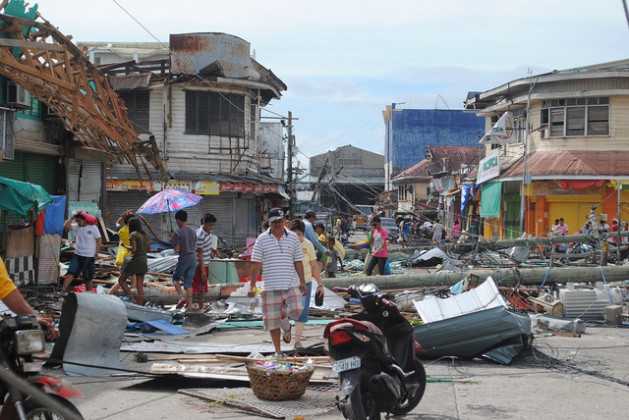 MANILA, Nov 12 2013 (IPS) - Despite the government’s early warnings and evacuation of up to 800,000 people from vulnerable areas, the category 5 – the highest level – Typhoon Haiyan (Yolanda to Filipinos) has left some communities and coastal zones in the central Philippine islands of Visayas in complete ruins.

Widely characterised as history’s strongest-ever typhoon, Haiyan made landfall in the Philippines on Nov. 8, slightly weakening before claiming the lives of thousands of people and inflicting severe economic damage on the country.

By some estimates, as many as 10,000 people may have lost their lives, with Tacloban City, the capital of Leyte province, bearing the brunt of the super typhoon. Another 600,000 people have been displaced, according to the U.N.

In the initial hours of the typhoon’s landfall, intermittent reports provided a glimpse of the potential impact of the storm, but many communities remained inaccessible to authorities and aid agencies for days.

This meant thousands of people were left with no basic necessities in the hours following the damage, with a cloud of uncertainty hanging over many affected areas in need of immediate assistance.

Almost a day into the storm’s landfall, the U.N. office in Manila rang alarm bells by telling Bloomberg news that certain areas were “still cut off from relief operations”, with “unknown numbers of survivors [lacking] basic necessities” due to the massive destruction of basic infrastructure.

“In the coming days, be assured: help will reach you faster and faster,” Philippine President Benigno Aquino declared after visiting the devastated areas, trying to reassure thousands of desperate citizens in need of relief and basic security. “The delivery of food, water and medicines to the most heavily affected areas is at the head of our priorities.”

Hours after the storm, local media portrayed a general picture of desperation and panic as many citizens sought basic commodities wherever they could find them. It took some time before the government was able to send troops and personnel to organise the distribution of relief and establish a modicum of stability in badly affected areas.

The Philippines army dispatched four C-130 planes to the affected areas, which were only able to arrive during daylight hours. An army battalion, comprising up to 250 troops, was sent to Tacloban, the most badly affected area.

So far, reports suggest the extent of the damage overwhelmed local authorities, with the national government, in the immediate aftermath of the storm’s impact, struggling to establish communication with affected areas.

The sheer force of Haiyan simply devastated airports, roads, electricity grids, and telephone lines, making it almost impossible for optimal coordination between authorities and leaving some affected areas in momentary isolation – just when they needed help the most.

Up to 9.5 million people were affected, 20,000 houses were ruined, four airports were shut down, with the total estimated costs of typhoon Haiyan possibly reaching up to 14 billion dollars. The U.N. World Food Programme announced that as many as 2.5 million people were in need of emergency assistance.

In response, the government announced that it was releasing an initial amount of 533 million dollars in discretionary funds to cover immediate relief operations as well as reconstruction efforts.

In Tacloban, the Department of Public Works and Highways (DPWH) requested around 100 hectares for establishing a resettlement site for some 45,000 families. So far, it has acquired about 300 hectares from the local government.

The National Food Authority, meanwhile, announced that it has up to three million sacks of rice ready for redistribution in affected areas, but officials have raised concern with repacking of food items and their delivery to affected areas.

Experts such as Zhang Qiang, a specialist on disaster mitigation at Beijing Normal University, have tried to underscore the inevitability of Haiyan’s devastating impact on affected areas by arguing, “Sometimes, no matter how much and how fully you prepare, the disaster is just too big.”

Despite impressive rates of economic growth in recent years, with the Philippine economy projected earlier this year to grow by as high as seven percent in 2013, there has been relatively small investment in basic infrastructure. Thousands of roads and bridges are in desperate need of maintenance and improvement, while many rural areas are still to enjoy reliable electricity connection and reliable access to urban centres.

The Aquino administration has tirelessly sought to push ahead with a dozen major Private-Public Partnership (PPP) infrastructure projects to boost the economy and improve the country’s resilience to natural disasters, yet most aren’t expected to be finished before 2015.

A combination of regulatory uncertainty, corruption, and mismanagement has left many areas, especially outside the industrialised centres in the northern island of Luzon, lacking in basic, quality infrastructure.

In recent years, experts and pundits have consistently pushed the Philippine government to improve its basic infrastructure, especially given the country’s vulnerability to natural calamities. Many have criticised the government for not implementing more decisive measures ahead of the storm.

Knowing very well that many shantytowns and coastal communities have always been vulnerable to natural disasters, there were a number of options that the government could have pursued, critics argue, from the mandatory evacuation of citizens in high-risk areas to the establishment of concrete bunkers that can withstand super- storms.

But for many, the greater issue is climate change, and how developing countries such as the Philippines have been paying the price of centuries of relentless industrial expansion by the developed world, exacerbated by the ongoing deadlock in climate negotiations, whereby major Western countries as well as big emerging economies have refused to subject their emission levels to mandatory reduction.

More regrettably, beyond the setbacks in mitigating global warming, many poorer countries have also lamented the rich world’s lack of investment in adaptation funds, which could help more vulnerable countries to cope with the impact of climactic fluctuations.